“Maybe being a mother and a champion was a crazy dream, but it didn't have to be.”
save article 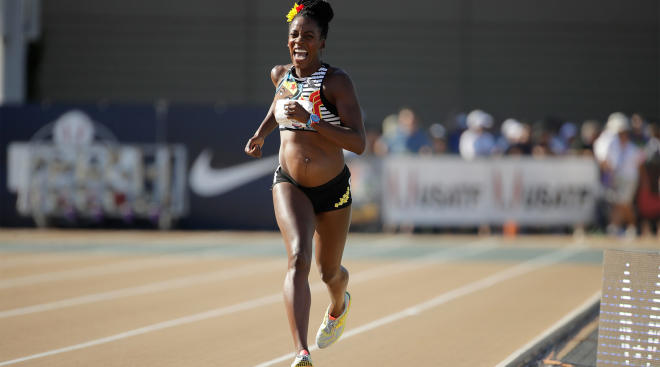 Nike is synonymous with powerful ad campaigns. But what if the messaging is all talk? Olympian, national champion and mom Alysia Montaño partnered with The New York Times to slam Nike for not practicing what it preaches. In a powerful article and video, the runner goes on the record to share that “Nike told me to dream crazy, until I wanted a baby.”

This Mother’s Day, right before Montaño shared her story, Nike released its “Dream With Us” film in conjunction with its Just Do It crusade. The commercial is meant to capture the power a group of women can have. Female athletes are showcased throughout, including gymnast Gabby Douglas and Alex Morgan, Megan Rapinoe, and Mallory Pugh of the US Women’s National Soccer Team. This isn’t Nike’s first rodeo promoting equal opportunity for girls. It has a whole portfolio of powerful campaigns encouraging young athletes to “just do it.” But their talk is cheap, according to Montaño and a handful of other female athletes who are standing in solidarity.

Montaño is a mom to Linnea, 4, and Aster, 1. When she was pregnant with her daughter, she made headlines for running in a race while eight months pregnant. “I wanted to turn stereotypes about pregnancy upside down…I wanted to show people you could be a mother and still have a successful career, even in sports.”

The athlete was sponsored by Nike, but when she told them she wanted to have a baby they basically told her they’d pause her contract and stop paying her. And it’s not just sponsors. The US Olympic committee strips females of their health insurance if they don’t stay at the top of their game during pregnancy, Montaño explains in the video.

“I was pissed and very upset by the fact that there was not a policy in place that would protect me, and I fought tooth and nail to make sure that this would not happen to other women.” To be the change, she started a maternity leave legislation so female athletes wouldn’t lose their health insurance. She also worked herself to the bone to meet the expectations that were made for her. “They weren’t sure if I was going to be able to return after my pregnancy; I proved them wrong.” Montaño went on to win a national championship at six months postpartum, and another national championship at 10 months postpartum while still nursing. When it came time for the World Championships in Beijing, China, she was still nursing and pumped for 10 days so she could ship her milk back home.

“Not having any system in place to protect our female athletes puts our health at risk.” Sponsors aren’t stupid—they know what they’re doing isn’t right, but as Montaño explains, they implement clauses that forbid their athletes from talking about the specifics of their contracts.

“Companies like Nike tell us to ‘dream crazy,’ we say, how about you stop treating our pregnancies like injuries,” she says. “Then they tell us to believe in something, and we say how about maternity leave? How about, when you tell my daughter she can achieve anything, you back it up.”

A 2019 Nike track and field contract shared with The Times states the company has the right to reduce an athlete’s pay “for any reason” if they don’t meet a specific performance or ranking, with no exceptions for pregnancy, childbirth or maternity. In a statement, the company acknowledged some of its sponsored athletes have had their pay reduced because they were pregnant, but says it changed its approach last year. Nike declined to say if it wrote those changes into its contracts.

“If they try to dismiss your pregnancy, if they call it a distraction or an injury, remind them what they told us—that great athletes never back down; that great athletes push the limits of what’s possible, both on and off the track. Because that’s the warrior spirit that packs stadiums and sells sneakers,” Montaño says. “We’re the ones that decide what dreams are crazy and what dreams make perfect sense, and we’re the ones who tell our daughters the difference between dreams and advertising.”

The video closes with one powerful statement: “Who knows, maybe being a mother and a champion was a crazy dream, but it didn’t have to be.”