"There's guilt for parents. You're so torn because being a working parent in a dual-working family you're missing the scaffolding that normally supports you.”
Save article
ByNehal Aggarwal
Associate Editor
PublishedApr 2020 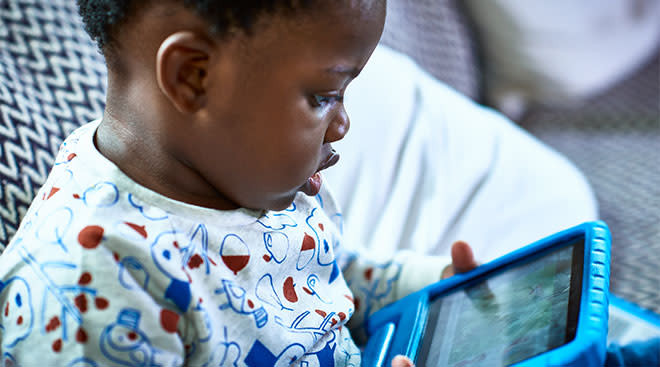 As we all continue to stay home, many parents are finding themselves tasked with entertaining their young children at all hours of the day—and usually without the childcare and help they might normally have. But now some parents are opting for “virtual babysitting.”

Erin Butler is a mom to two boys, Colin, 5, and Sean, 3, who lives in New Jersey with her husband Mark. She recently told her co-worker, Renee Flores, how difficult it was to work and take care of young kids while self-isolating. Flores, who has older kids, offered to have her eldest, 21-year-old Sarah Flores, virtually babysit.

“My mom was talking to some of her co-workers about their home situations and they expressed to her how upset they are that their kids aren’t engaging with anyone and they’re just sitting on their iPads and playing video games,” Sarah told TODAY Parents. "She came into my room and said, ‘You babysit. What if there was a way you could do it virtually over FaceTime or something?’”

Butler arranged an hour-long call for Sarah and Colin while her younger son napped. It wound up lasting for 90 minutes because of how much fun her son was having. “I was on conference calls while he was on with her,” Butler told the outlet. “He walked around the house with the iPad and was showing her his room and different areas. They talked about creatures like whales, squids and turtles and were drawing together while Sarah told him all sorts of interesting things about whales.”

Butler was surprised by how much her son engaged with Sarah and booked their next virtual session after they finished the first. “There’s not a lot we can do these days—no playdates, no parks and it’s still cold out in the northeast—so it was nice to see him interacting with someone. The kids have only really been around us and talking to us for weeks so I’m sure they’re sick of it,” she explained.

For many parents who are struggling to balance parenting with other aspects of life in quarantine, virtual babysitting may be a great option—and it’s one many are interested in, according to a survey from UrbanSitter.

The survey looked at data from over 600 nannies and sitters on its platform and found an average of an 84 percent drop in babysitting work due to the pandemic. However, 74 percent of sitters stated they are interested in “virtual babysitting” jobs.” This would include them entertaining the kids for a period of time over video chat so their parents could focus on other tasks. Of these sitters, 57 percent stated they would charge their normal babysitting rate, while 32 percent said they would charge less. Plus, 89 percent of respondents felt they possessed skills that would help to engage kids, even virtually, including storytelling, singing, teaching yoga, tutoring, dancing and more.

“There’s guilt for parents,” Renee told TODAY Parents. “You’re so torn because being a working parent in a dual-working family you’re missing the scaffolding that normally supports you, whether it’s school or in-home support or family members or other kinds of childcare. That’s the only way it works—it depends on that incredible level of support. If my kids were that little right now, I thought, ‘What wouldn’t I do to have someone give me some time to focus and not have that guilt?’”