We Can't Even Have Donuts? a Review of the Breastfeeding Ad Campaign 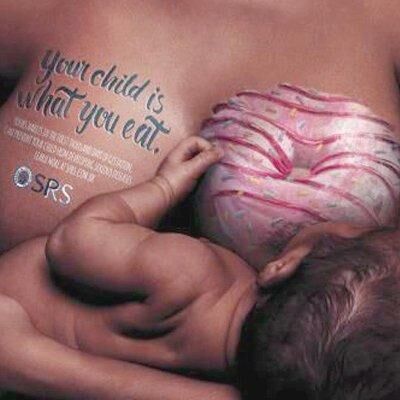 You guys, I had the most awkward moment the other day. I was sitting on a park bench, breastfeeding my baby. I had just eaten a big bag of Skittles, because this is America. I have kind of a forceful letdown, so my baby pulled off and next thing I knew, Skittles were shooting out of my nipple and all over the playground. Older kids, thinking that a rogue piñata was on the scene, scrambled through the gravel for the little sugar-bombs. I quickly got my Skittles-absorbing breast pad in place to stem the flow, but the damage had been done. Talk about tasting the rainbow.

Okay, that didn’t happen. I’m not even breastfeeding — I weaned my youngest child over a year ago. But I couldn’t help myself, considering that a Brazilian ad campaign is making the rounds that essentially tells you that there’s a tube that goes between your mouth and your nipple, and every bad thing you eat is poisoning your baby and you’re the worst. Eat a donut, baby eats a donut (side note: mmm, donuts). Drink soda, baby drinks soda. I shudder to think about that time I went running and a bug flew into my mouth and before I could react, I had swallowed it.

Fascinatingly, this ad campaign comes from an association of pediatricians in Rio. These are actual medical doctors who likely have been taught a thing or two about how the human body works. The intention of the campaign seems to be to encourage women to…I don’t know, pump and dump when they eat anything other than quinoa and organic avodacos? Get tattoos of junk food on their ta-tas?

To me, this seems like just another example, in a long line of examples, of scaring the Skittles out of women that their bodies and their mothering are not up to par. For example, supplements (called “galactagogues” in lactation speak) can help some women with milk supply. But telling women that they need supplements not-so-subtly convinces them that their bodies aren’t capable of making enough milk without outside help. Telling women to pump and dump after one drink (when virtually all lactation experts say this is not necessary) scares women into wasting valuable breastmilk. And freaking them out about their own diets is not just mean, but totally and completely wrong and misleading. Breastmilk is amazing. Your body knows how to make it (that doesn’t mean it’s easy, and many women need expert help in figuring it out). Your body also knows how to make great breastmilk even if what you’re eating is less-than-great. Think of your boobs as a giant cheeseburger filter. Cheeseburger in, and all the bad stuff stays with you, while your body makes perfect milk for your baby. Yes, you should maybe not eat fast food every day — for your own health — but this has nothing to do with feeding your baby, and it has no place in a supposedly pro-breastfeeding ad campaign.

And let’s face it: Breastfeeding Hunger is real, and it can make you eat like you just got out of prison. When it hits, it is not very good at discriminating among food choices. I have, in those emergency ‘I-must-eat-everything-or-I’m-gonna-die’ breastfeeding moments, found myself eating the following, at speeds so high that I don’t think my tastebuds even got a chance to do their job:

Maybe it’s just me, and you all are preparing and eating the most fabulously balanced meals, every meal, while also navigating new motherhood and breastfeeding. Regardless, it seems to me like there are only three likely outcomes of this campaign:

I’ve said it before, and I’ll say it again: everyone needs to take a big old step back from the new mother. You want more women to breastfeed? Give them paid maternity leave — for every profession, with no exceptions. And don’t you DARE, ever again, show a ravenous breastfeeding mother a picture of a donut when there are no donuts to be had. That’s just mean.