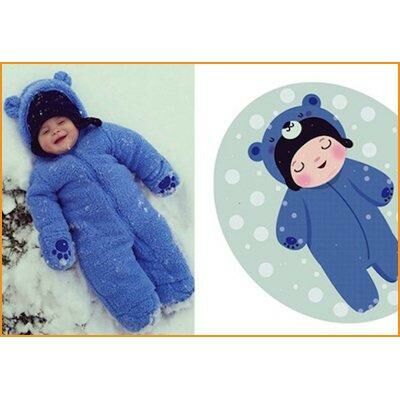 Can’t stop showing off your baby photos to everyone you know? Get ready for the next level: personalized illustrations, with a touch of cartoonish magic for good measure.

The clever idea was brought to life by Costa Rica-based graphic designer and illustrator Maria Jose Da Luz of Behance.net. She neatly sums up her ongoing project in just four words on her site: “little people, little portraits.” According to the Huffington Post, Da Luz was originally inspired after finding a subreddit called Reddit Gets Drawn, in which users post real-life photos for artists to illustrate. Moved by the many photos of babies and children, she quickly took to Adobe Illustrator to create her own cute caricatures.

Da Luz credits the charm of her work to “the pure energy, magic, innocence, and life kids have,” and explained that kids “can light our day with just a smile in a photo or a drawing.” Her portraits give that light a little extra oomph when she adds whimsical touches, like transforming a green sleeve to a kid-friendly creature. It’s a one-two punch of cuteness: on one hand, she captures that sense of magic in childhood; on the other hand, she captures your little one at a very real moment in time.

If you’ve already cleared out a spot on the wall for an illustration of your own, head over to Da Luz’s  Etsy shop, where she takes portrait commissions. She also sells plenty of other creations, from ready-to-print bookmarks to pillow covers, so don’t be surprised if you spend more time surfing the shop than you planned — we know we did.