Chinese Horoscope Predictions for Baby in 2019

Look to the moon—and the animal kingdom—to see what the future holds for your kiddo in 2019. 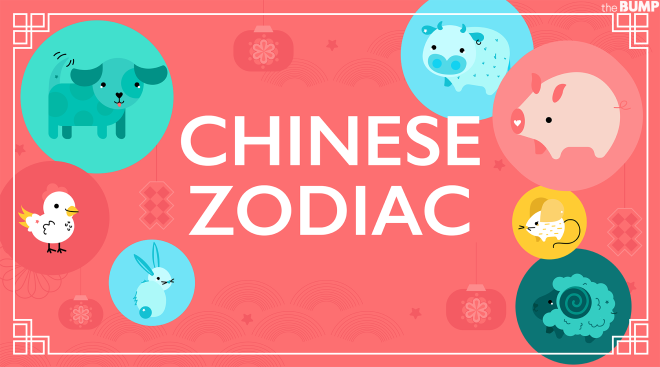 Looking to the zodiac for a glimpse into baby’s personality—and future—is always fun. But you’re not getting the full picture if you’re just consulting Western astrology. There’s a whole other zodiac—the Chinese zodiac—that’s brimming with fresh intel on your child. Here, we break down what each sign means for your child, and what’s likely in store for them in 2019.

What Is the Chinese Zodiac?

The Chinese zodiac assigns each birth year a different animal sign, which is believed to determine your dominant personality traits. There are 12 animals in the Chinese Zodiac, and the series repeats itself every 12 years.

While the Western calendar kicks off a new year in January, the Chinese lunar calendar can begin in January or February. So if your little one has a birthday in either of those months, double check that you’ve determined the proper sign. It simply wouldn’t be right for kids to run around thinking they’re Dogs when they’re actually little Sheep. From age 12 to the soon-to-be born, here’s how to figure out which animal is in in your family’s own personal zoo:

Curious about the natural traits and tendencies of each sign? Read on to learn about the unique zodiac personalities and what you can expect for your own little animal in the coming year. 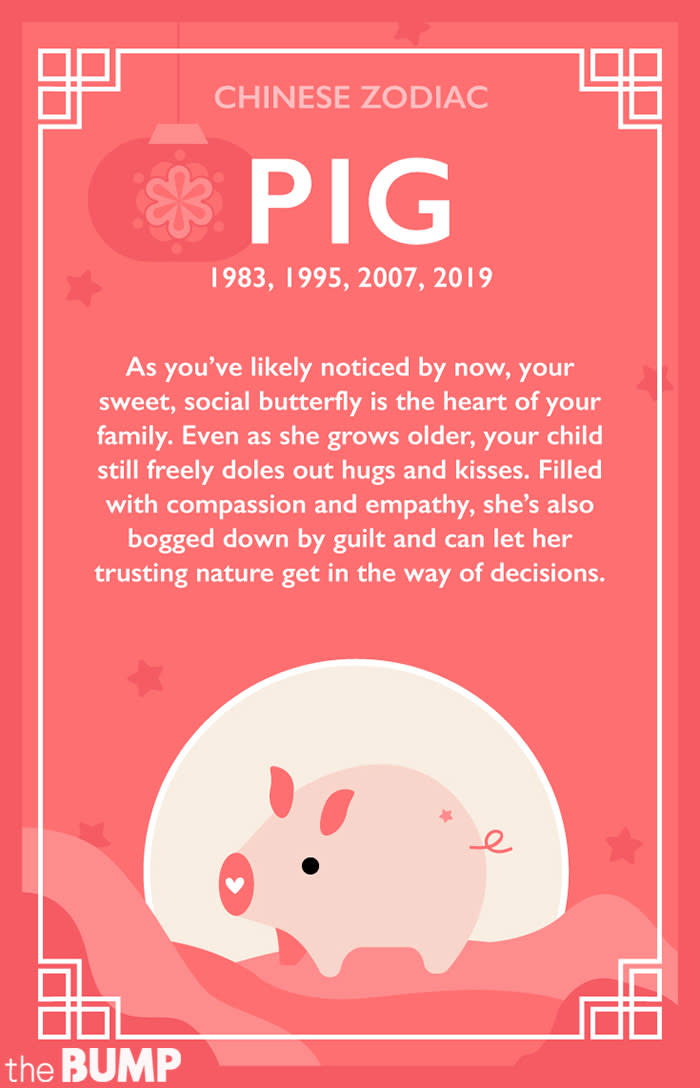 Personality traits: As you’ve likely noticed by now, your sweet, social butterfly is the heart of your family. Even as she grows older, your child still freely doles out hugs and kisses with the utmost sincerity and love. Filled with compassion and empathy, she’s also bogged down by guilt and can let her trusting nature get in the way of smart decisions. Nurture your little one’s instinct to help others, but also arm her with the ability to stand up for herself.

Predictions for 2019: The year will be full of exciting experiences for your child. “The Pig is always one to spot an opportunity and act on it,” says Master Kay Tom, an expert in Feng Shui and Chinese horoscope. Whether they make new friendships in play group or gain new developmental skills, your little Pig will prosper in 2019. 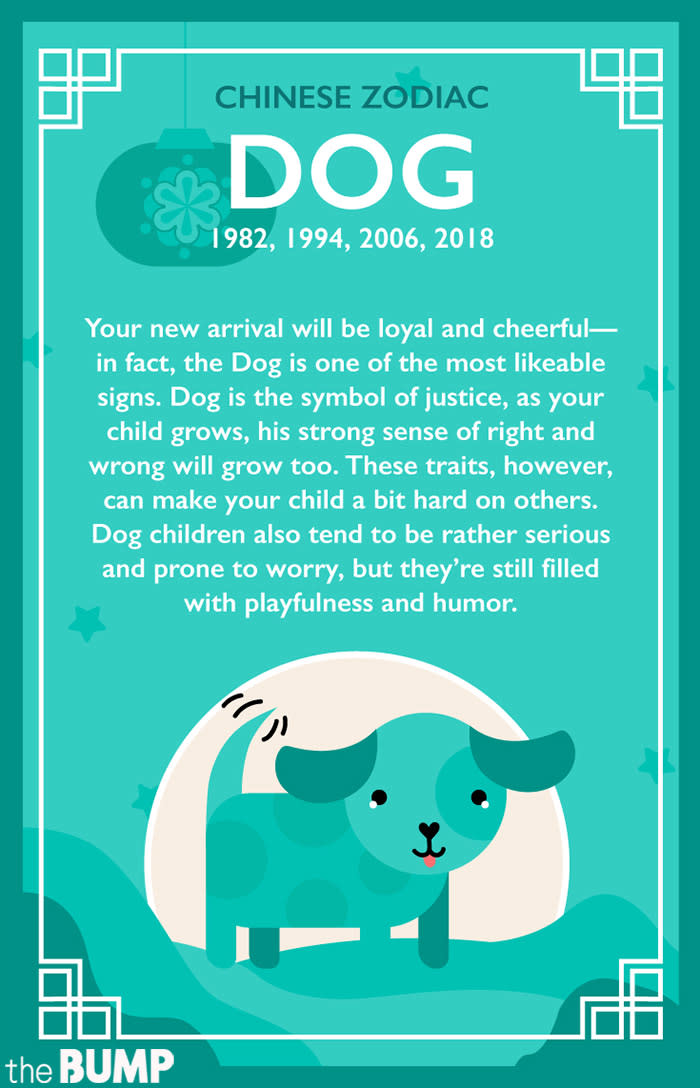 Personality traits: According to the Chinese zodiac, your new arrival will be loyal and cheerful—in fact, the Dog is one of the most likeable signs in the entire zodiac. Dog is also the symbol of justice, so as your child grows, his strong sense of right and wrong will grow too. (There’s no cheating in Candy Land with this one!) These traits, however, can make your child a bit hard on others and their missteps. Dog children also tend to be rather serious and prone to worry, but they’re still filled with playfulness and humor.

Predictions for 2019: The little Dog in your life will spend a lot of time worrying about silly things this year. Try tapping into their playful side so they can loosen up and let out all those pent up frustrations. “Encourage a constantly changing scene to promote the development of their skills and the positive aspects in their life so they can forget their concerns,” Tom says. 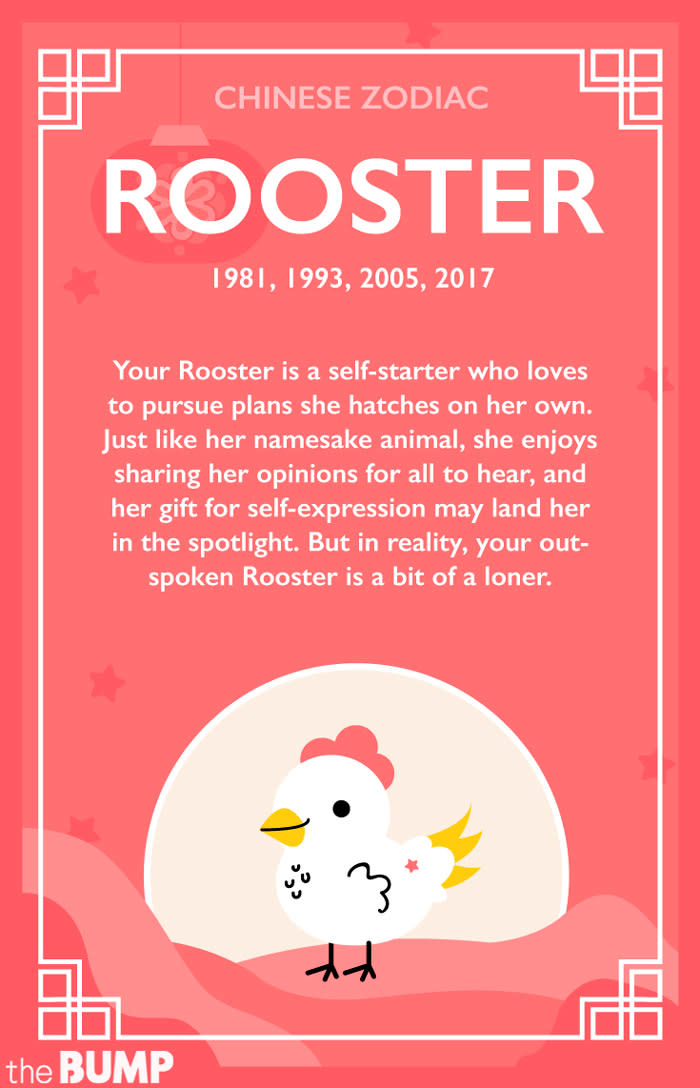 Personality traits: Your Rooster is a self-starter who loves to pursue plans she hatches on her own. And just like her cock-a-doodle-doo counterpart, your Rooster child lives for shouting her opinions for all to hear. Moreover, her gift for self-expression may land her squarely in the spotlight—which she loves (and her optimism and energy will help get her there). Interestingly enough, your outspoken Rooster is, in reality, a bit of a loner.

Predictions for 2019: “This child has a confidence that needs to be supported,” Tom advises. You can encourage Roosters to express themselves through singing, dancing or getting involved in the school play or community theater. 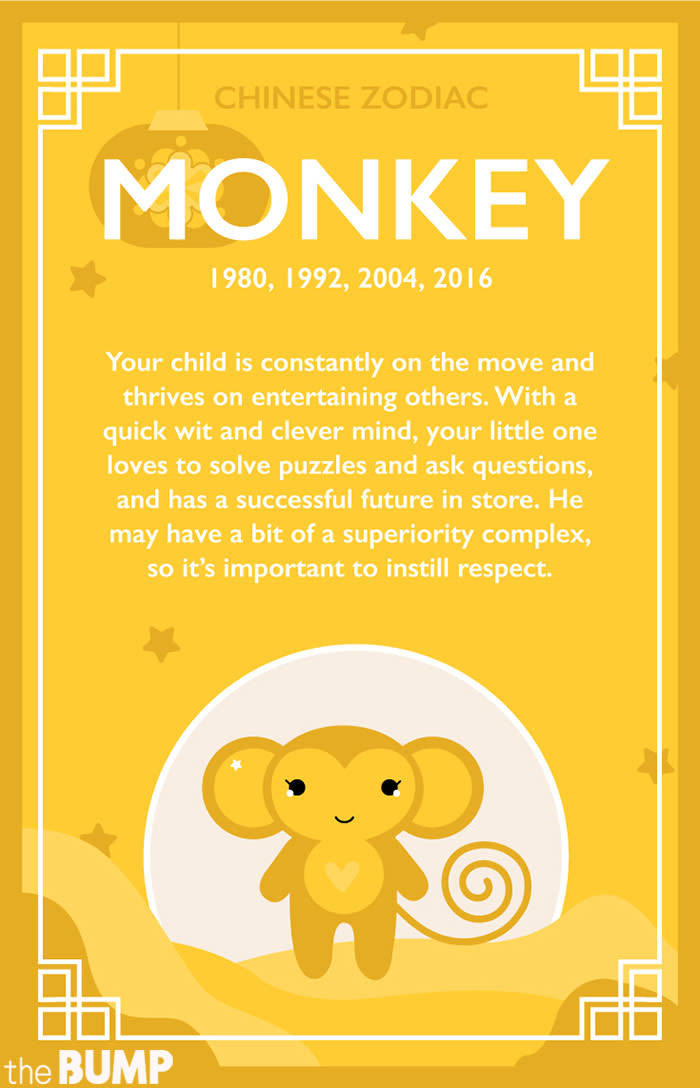 Personality traits: Who doesn’t love a monkey? Your child is constantly on the move and thrives on entertaining friends and family alike. He possesses a quick wit and clever mind, and has a successful future in store for him. Your little one also loves to solve puzzles, and ask lots of questions. He may have a bit of a superiority complex, so it’s important to instill respect.

Predictions for 2019: Last year may have been a year of meddling for the Monkey, but the new year is all about being a voice of reason. “The Monkey is a go-between this year and will address and solve any issues that develop on the playground,” Tom says. “They’re everyone’s friend with no judgement.” 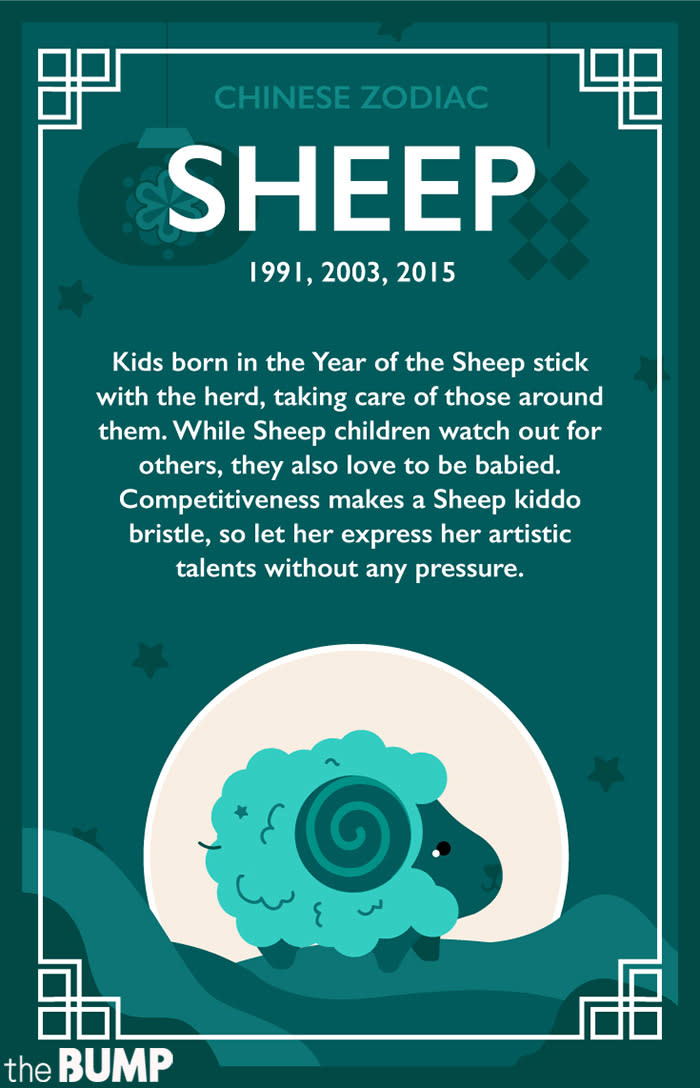 Personality traits: Like the animals themselves, kids born in the Year of the Sheep stick with the herd, taking care of those around them. While Sheep children have a knack for watching out for others, they also love to be babied. (Tip: Offer oodles of reassurance.) Since competitiveness makes a Sheep kiddo bristle, let her express her artistic talents without any pressure.

Predictions for 2019: The little Sheep in your life will learn a lot in 2019, specifically when it comes to daily routines. “Good habits are formed in early life and will set your child in a good routine for the future,” Tom explains. 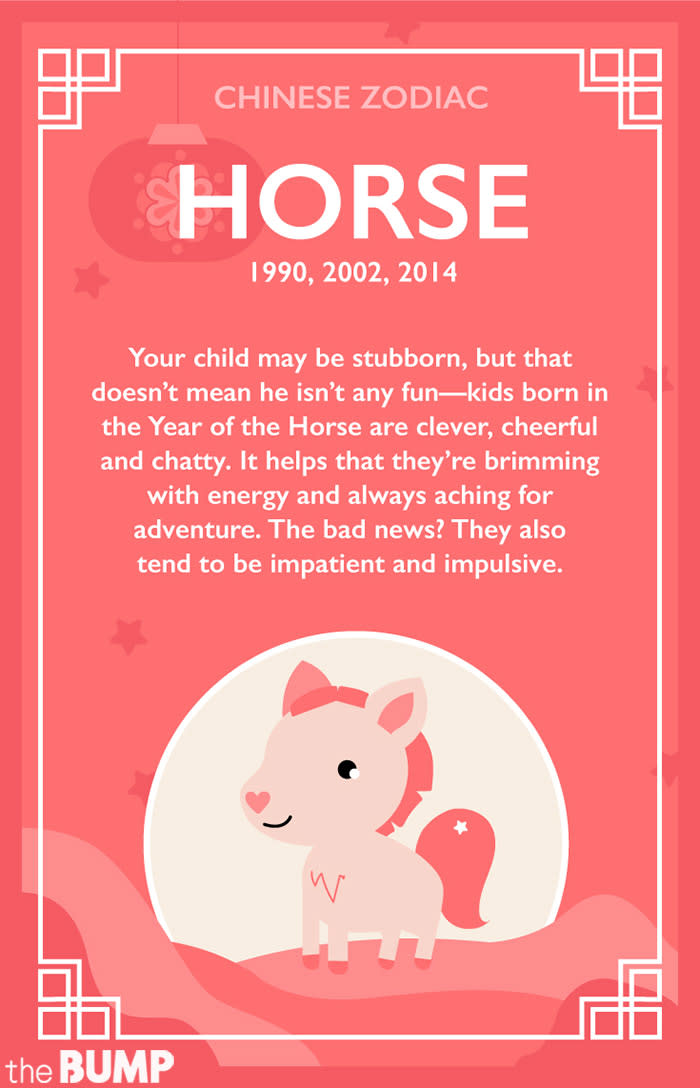 Personality traits: Stubborn and hard-working? Sure sounds like kids of the Horse sign. But that doesn’t mean your child is no fun—in fact, children born in the year of the Horse are clever, cheerful and oh-so-chatty. It’s even said these kids are the easiest to fall head-over-heels for. It probably helps that they’re brimming with energy and always aching for an adventure. The bad news? Your adventure-seeker is also the impatient and impulsive sort.

Predictions for 2018: Horse kids thrive on excitement! Unfortunately, the Year of the Dog will provide little of it for your child. This year, it’s up to you to serve up some scintillating activities, Smith says.

Predictions for 2019: Your free-spirited Horse will be difficult at times this year. Fear not, Mom. Tom says, “this is not negative, but shows true strength of character, even though it sometimes can be a challenge to deal with.” 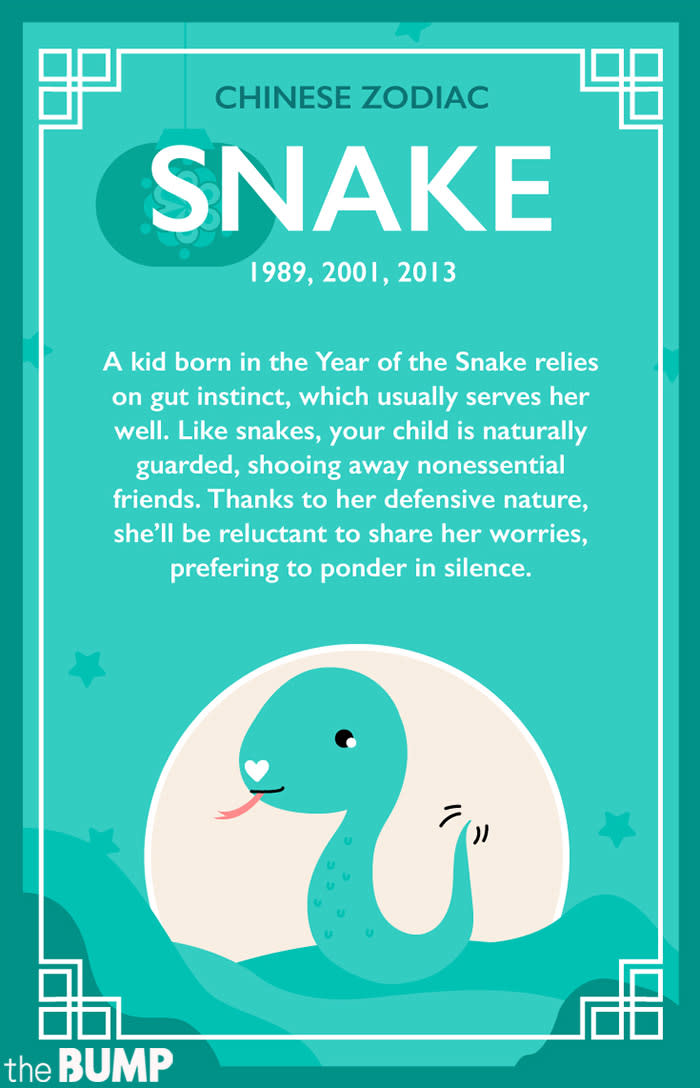 Personality traits: Much like your child’s animal counterpart, a kiddo born in the Year of the Snake relies heavily on his own gut instincts. And lucky for him, he’s often confidently led in the right direction. But also like snakes, your child is naturally guarded, shooing away nonessential friends. (However, the friendships your child deems worthy are deep.) Thanks to his defensive nature, he’ll also be reluctant to share his worries, opting instead to ponder in silence.

Predictions for 2019: This coming year is all about friendships and connections for your Snake, specifically with the Monkey. “The Snake has a great ally in the Monkey, so encourage playdates with children.” 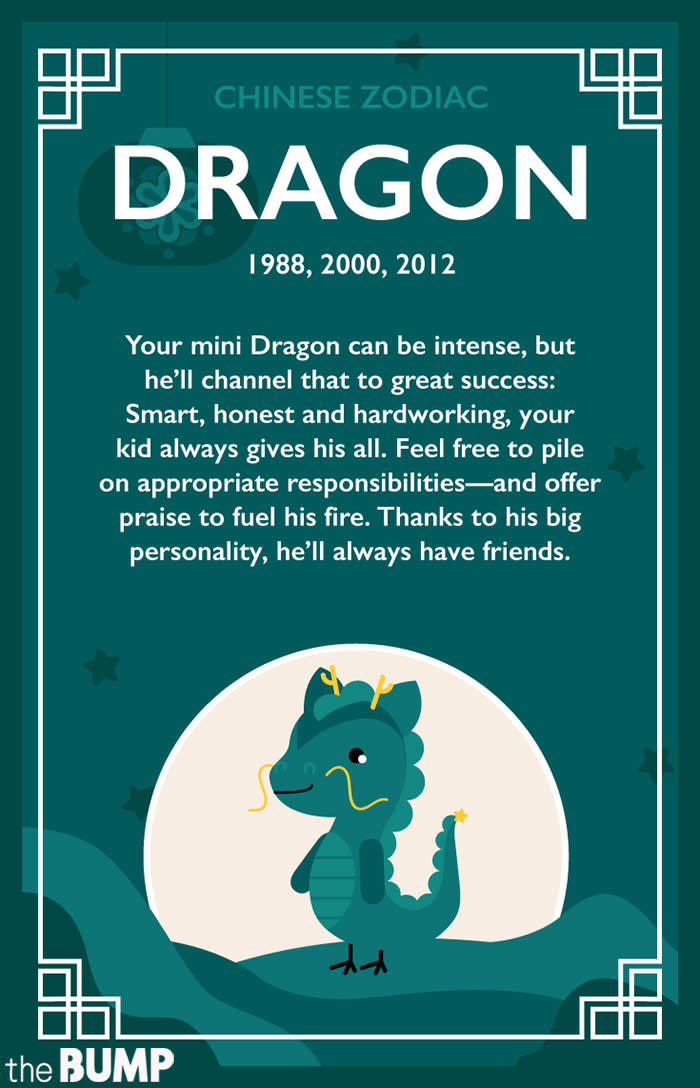 Personality traits: Your mini Dragon is kind of intense, huh? When she gets older, she’ll channel that to great success. For now, feel free to pile on appropriate responsibilities. She’ll love it—and thrive because of it. Just be sure to offer praise afterward to fuel her fire. Your intelligent and hard-working kid tends to give everything her all, so watch out for burnout, especially since she’s her own harshest critic. Your Dragon’s unwavering honesty and big personality ensures that she’ll always be surrounded by pals.

Predictions for 2019: It’s a big year for the Dragon in your life. “Encouragement is the key, and success can easily be achieved with the right support,” Tom explains. “They knows their direction and will apply everything in order to get there.” 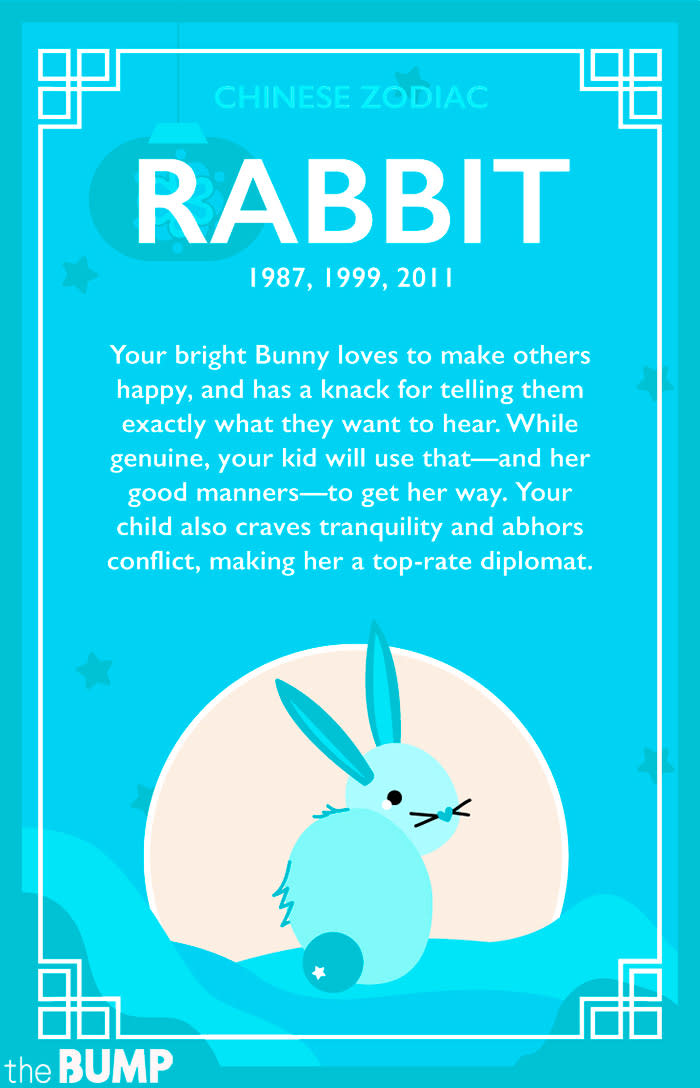 Personality traits: Your bright Bunny loves to make mom and dad happy, telling you exactly what you want to hear and impressing strangers with his good manners. While genuine, your kid will use all of the above to get his way. It also doesn’t hurt that the Rabbit is known to be the luckiest member of the Chinese zodiac. Finally, your child craves peace and tranquility and abhors conflict, making him a top-rate diplomat.

Predictions for 2019: Rabbits are a force to be reckoned with this year. Your child will push you to be the best version of yourself, and will be at the center of every decision you make. “This child needs to know the truth, as they are one who isn’t easily fooled,” Tom advises. 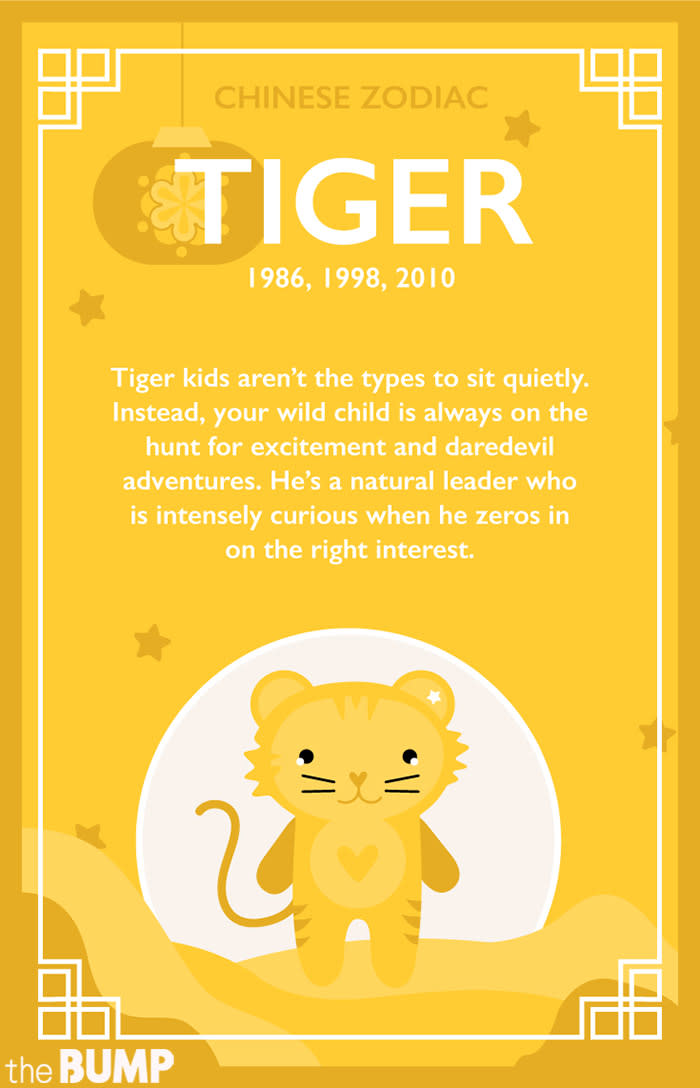 Personality traits: Tiger kids aren’t the types to sit quietly. Instead, your wild child is always on the hunt for excitement, fun and daredevil adventures. (That’ll morph into rebellion soon enough.) And because of her charismatic nature, bright-eyed optimism and big heart, she’s never doing it alone. At the same time, don’t let your Tiger’s tendency to daydream fool you: She’s a natural leader who is intensely curious when she zeros in on the right interest.

Predictions for 2019: Your little one will thrive during the year of the Pig. “The Tiger empathizes with the Pig completely—the two of them getting on very well,” Tom explains. In particular, your child will learn to appreciate team work in order to accomplish new goals. 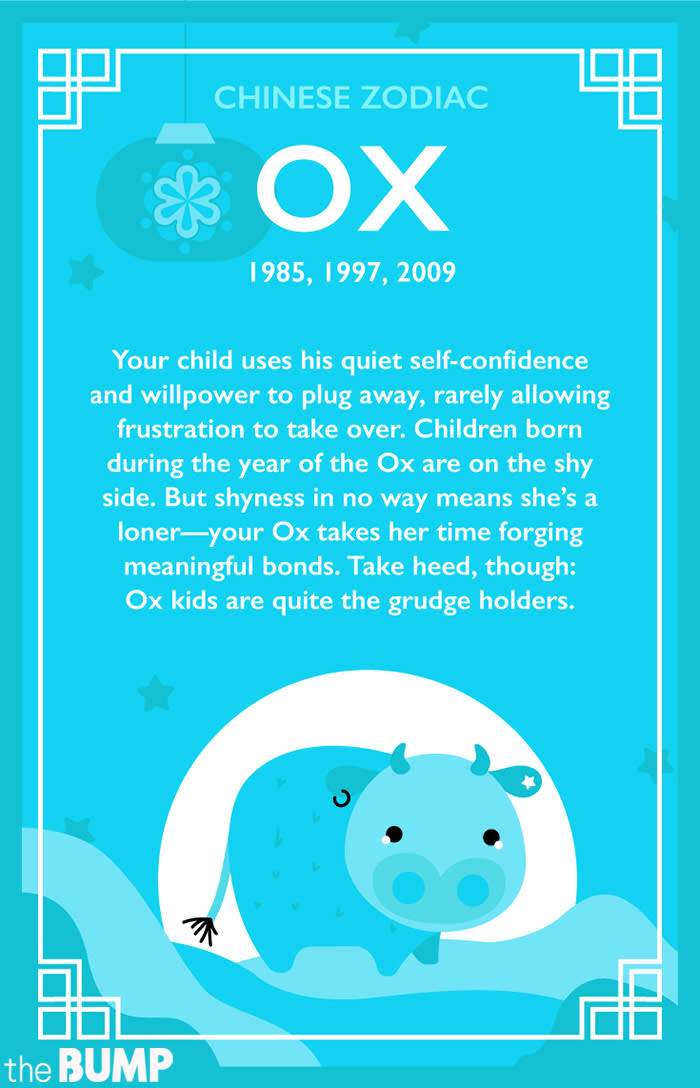 Personality traits: Temper tantrums aren’t typically in your Ox’s repertoire. Instead, your child uses his quiet self-confidence and willpower to patiently plug away, rarely allowing frustration to take over. Children born during the year of the Ox are on the shy side, so you’ll likely need to coax answers out of your little one with “what’s wrong?” questions. But shyness in no way means she’s a loner—your Ox takes her time forging meaningful, long-lasting bonds. Take heed, though: Ox kids are quite the grudge holders.

Predictions for 2019: Your Ox looks forward to spending quality time with family this year. “A gardening project, baking gingerbread men or simply reading a story in front of the fire will suit them well,” Tom says. 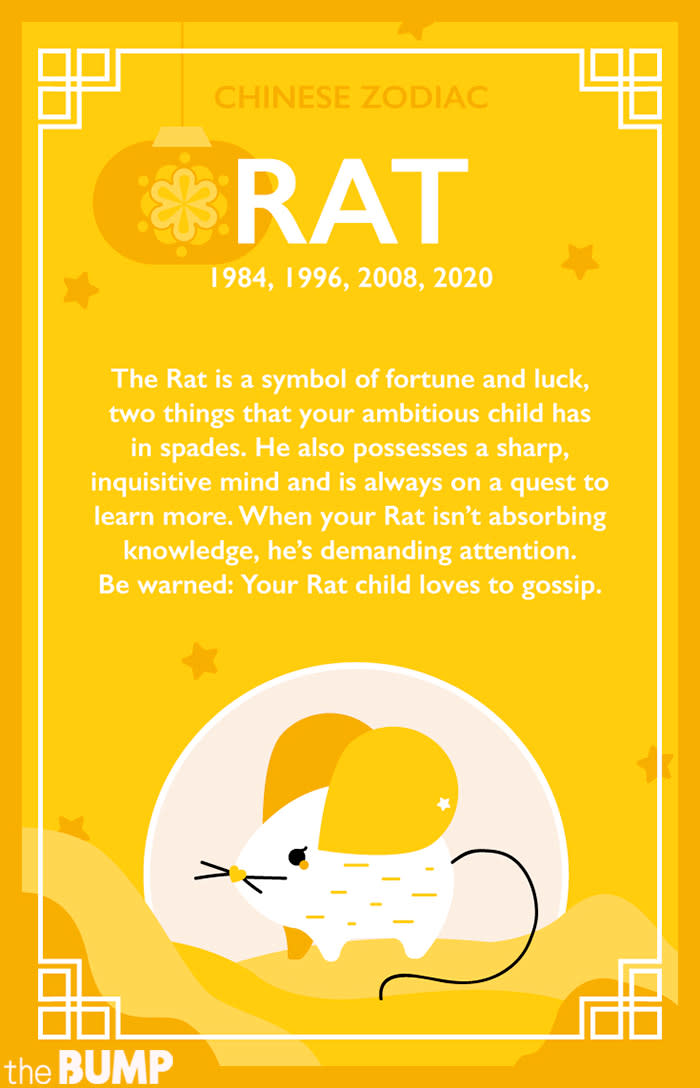 Personality traits: In China, the Rat is a symbol of fortune and luck, two things that your ambitious child has in spades. He also possesses a sharp, inquisitive mind and is always on a quest to learn more. (He especially excels in reading and languages.) When your Rat isn’t absorbing knowledge, he’s demanding attention by way of megawatt charm—or tears. Be warned: Your Rat child loves to gossip, and if he’s not careful, this tendency may cost him a friendship or two.

Predictions for 2019: In the coming year, your child will be bursting with energy that needs to be released. Tom suggests keeping the days busy so your Rat will be tuckered out and ready for sleep when when bedtime comes. Family gatherings, summer parties and outdoor activities are fun ways for your Rat to let out their excitement.