Next time you start thinking "let's just order in,” pull out one of these ingenious recipes. They’re fast, family friendly and delicious. 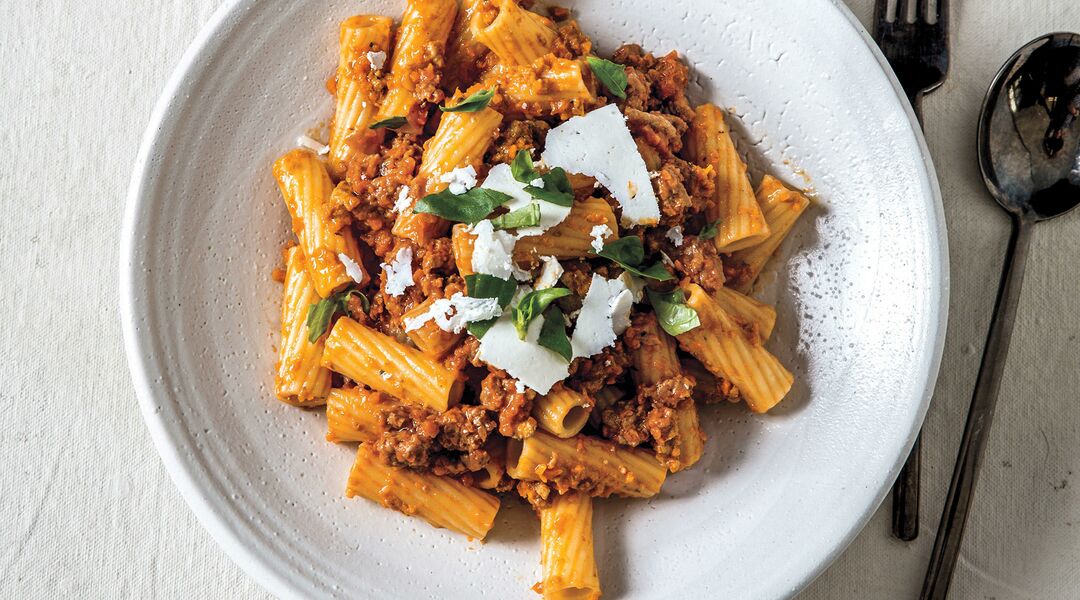 If we told you that cooking a meal during the week could be simple, quick and actually enjoyable, would you believe us? We know, it seems like there’s a better chance of a unicorn prancing through your kitchen then dinner being a cinch every night of the week—but we’re here to tell you that a delicious, easy-to-make dinner is well within your busy-mom reach. How do we know? We’re in the parenting trenches just like you, and we get that the struggle of school-night / work-night cooking is all too real. As food writers, we decided to marry our knowledge from the food world with our everyday experiences in a cookbook, The Dinner Plan, that’s more like a food-savvy best friend than a task master, serving up recipes that can work for whatever weeknight situation you’re faced with.

You never know what life is going to toss your way on any given night, whether you have family members spinning through a seemingly revolving door, a spouse who’s running late or a kid who needs to be picked up from swim practice five minutes ago. (Sound familiar?) Which is why we put together recipes that are “extra-fast”, for when you just don’t have more than 30 minutes to get dinner prepped, cooked and on the table. The following are a few of our favorite hectic- mom-friendly meals, so you can handle whatever the week throws at you—even if it’s a prancing unicorn. 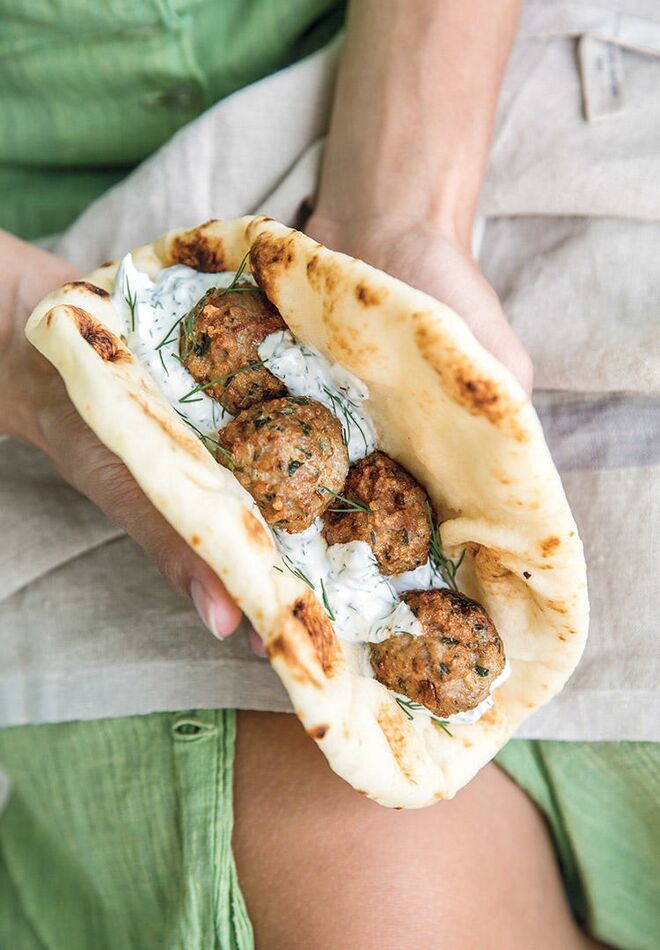 Let’s be honest, who doesn’t like a tiny, tasty meatball? This version uses leaner turkey meat rather than beef, with a lot of flavor coming from the tangy yogurt sauce and spices that are probably already in your spice drawer. Meatballs are also incredibly versatile: Serve them plain for the picky eater of your family, or over pasta, in a Greek Salad or wrapped in warm pita with a generous slathering of sauce for a hand-held meal that’s good to go.

Instructions
In a medium bowl, beat the egg. Add the garlic, shallots, parsley, cumin, chili powder, salt and pepper and stir together. Add the turkey and gently mix together with a fork or your hands. Shape the mixture into about 16 Ping-Pong–size balls and set aside.

In a small bowl, stir together the yogurt, garlic, oil, vinegar and dill. Stir in a little water to thin, if needed, then season with salt and pepper. 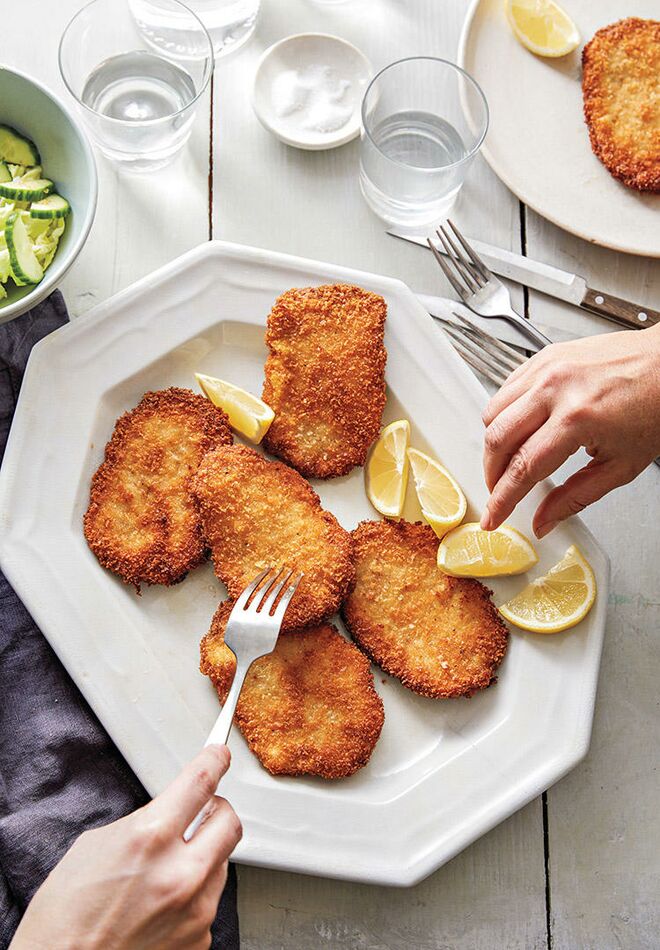 A working-mom friend of three extremely active boys recently made this recipe on a busy Tuesday night with a side of orzo and labeled it “a huge hit.” Unlike the classic chicken cutlet, we urge you to try using pork cutlets: Not only do they cook up beautifully, but they also tend to be moister and more flavorful than chicken. We like to squeeze a little lemon juice on top before serving with a side of buttered pasta and perhaps some broccoli or peas. We also like to double the batch so we have leftovers for lunch the next day.

Dredge one cutlet in the flour, coating completely, then shake off any excess. Dip it in the egg mixture, letting any excess drip off, then coat with the panko, gently pressing it into the panko so the crumbs stick. Put the breaded cutlet on a plate large enough to fit all of the cutlets without crowding and repeat with the remaining cutlets.

In a large skillet, heat about 1/4 inch oil over medium-high heat until it shimmers. Working in batches, add the cutlets and cook until golden brown, about three minutes. Flip the pieces over and cook until almost cooked through, but still pink in the middle, about two minutes more. Transfer the cutlets to a paper towel–lined platter, sprinkle with salt and tent with foil to keep warm. Repeat with the remaining cutlets, adding more oil if needed. Serve with lemon wedges. 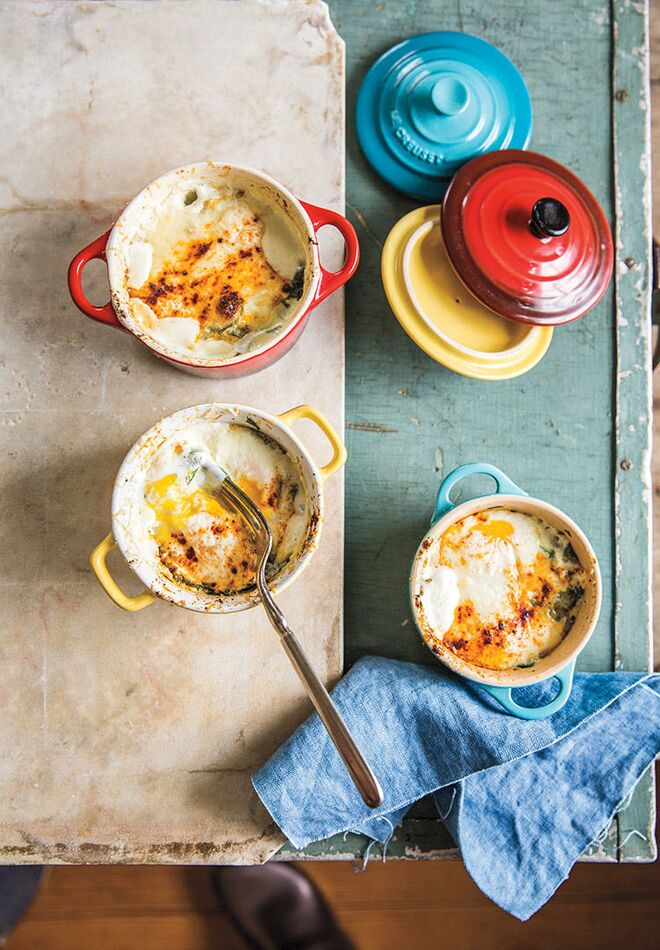 Baked Eggs with Spinach and Cream

Who says eggs are just for breakfast? If there’s one ingredient we always have in our fridge, its eggs, because they will save your dinner-life time and again (omelets! frittatas! added to a stir-fry!). But if you haven’t made eggs this way, we urge you to make this recipe immediately. Kids love to get their own little ramekin to dip toasted bread into, and you can personalize each one to everyone’s taste: Spinach or no spinach. Cheese or cream, or none for the lactose-intolerant. You can also add an extra egg to the dish for hungrier members of the family.

Instructions
Preheat the oven to 375 F with a rack in the middle position. Smear the inside of four half-cup ramekins with 1/4 tablespoon of butter each, then put them on a sheet pan.

Put one-fourth of the spinach in each ramekin, tamping it down if needed. Season with salt and pepper, then gently crack an egg into each ramekin and pour 2 tablespoons of cream over each. Top with a generous amount of cheese and a dusting of smoked paprika (if using).

Bake until the egg whites are set and the yolks are as runny or firm as you like, 12 to 18 minutes. Top with the herbs, if you like, and serve immediately.

Tip: If you don’t have ramekins, use a regular muffin tin. In this case, there’s no need to put it on a sheet pan, but be sure to generously butter the cups. To transfer the baked eggs to a plate, run a small knife around the inside of each cup and use a large spoon to carefully scoop outthe contents. 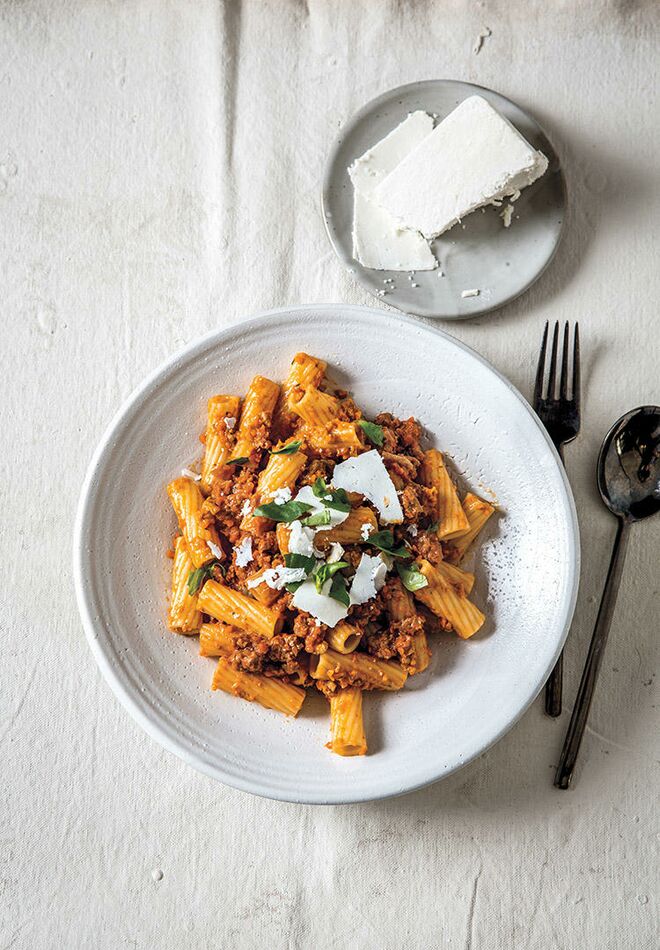 When the fall air turns crisp and wooly sweaters come out of storage, this is the dish we want to make every night. There’s something incredibly cozy about pasta tossed with a hearty bolognese and then topped with a flurry of grated cheese. Our version is different in two ways: Unlike a traditional bolognese, it doesn’t require a long simmer (without losing any of the rich flavor). We also added extra carrots to the sauce for texture and natural-sweetness (and to slip in some extra veggies—the kids will never see it coming).

Meanwhile, in a food processor, combine the carrots, celery, onions and garlic and pulse just until finely chopped. In a large high-sided sauté pan, heat the oil over medium-high heat. Add the chopped vegetables and cook, stirring often, until softened, about three minutes. Add the tomato paste, oregano and pepper flakes (if using), season with salt and pepper and stir for about one minute.

Raise the heat to high, push the vegetables to the sides of the pan and add the beef. Cook, stirring often and breaking up the meat until the meat is browned, about three minutes. Add the tomatoes and simmer, stirring occasionally, until the sauce has thickened slightly, about two minutes. Stir in the cream and simmer one minute more. Check the seasonings (it should taste a little salty and, if you like heat, a little spicy) and set aside. 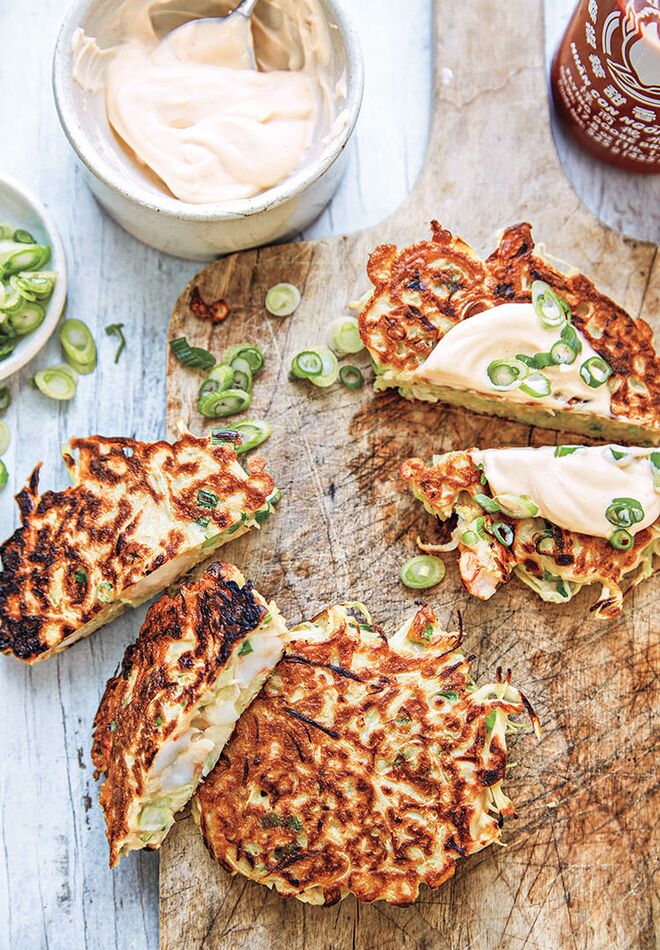 When you want to get that “whoa!” factor with dinner, make these incredibly tasty “pizzas.” It’s easy to see why this dish (which is more like a pancake than a pizza) is so popular in Japan (where Kathy’s mom is from): You make a quick batter, cook them in one pan like a pancake and serve them cut into wedges so they can be dipped in a spicy sriracha mayo (or soy sauce or plain if your kids don’t like spicy). Bonus: They’re good both hot and at room temperature (we’ve even made these for cocktail parties, where people go ga-ga for them). Note: Don’t be put off by the amount of cabbage in the recipe—it reduces during the cooking, and to make things easier, we recommend buying a bag of pre-shredded cabbage. Skip the shrimp for any vegetarians and add more vegetables like carrots.

Instructions
In a large bowl, whisk together the eggs, broth, oyster sauce, soy sauce and salt. Add the flour and cornstarch and whisk until just incorporated. Avoid over-mixing; some lumps are okay. Add the cabbage, scallions and shrimp and gently fold into the batter.

In a large skillet, heat 1 tablespoon of the oil over medium-high heat until it shimmers. Spoon about 1/2 cup of the cabbage mixture into the skillet. Use a spatula to lightly pat down the surface to form a round about 3 inches wide and 1/2 inch high. Repeat until the skillet is full but not overcrowded. Cook, undisturbed, until golden brown, about three minutes.

Flip the rounds over and cook, undisturbed, until cooked through and golden brown, about four minutes more. Transfer to plates and repeat with the remaining 1 tablespoon oil and cabbage mixture. (It’s okay if there’s liquid left in the bottom of the bowl; don’t use that.) Serve with the mayonnaise and Sriracha, if you like; you can also mix them together.

You can find a copy of The Dinner Plan on Amazon.com.

Caroline Campion is a freelance writer and the creator of the award-winning food blog DevilAndEgg.com. She was also a senior editor at GQ, Saveur and Glamour and has contributed to the New York Times, Martha Stewart Living and Redbook.

Kathy Brennan is a food/cookbook editor and writer. A winner of the Bert Greene and James Beard journalism awards and a graduate of New York’s International Culinary Center, she was a senior editor at Saveur and also worked at Gourmet and Food Arts. 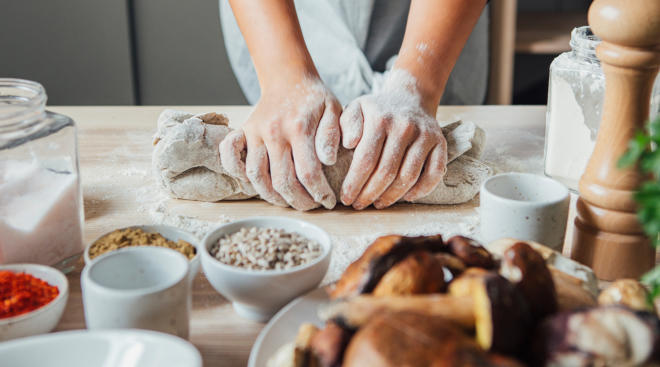 How to Make One Meal for the Whole Family 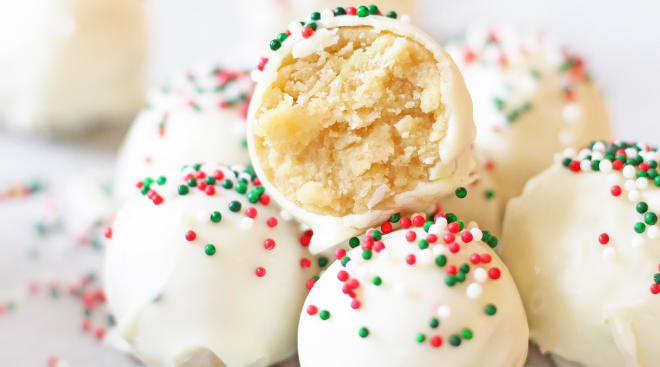 The Best Christmas Cookies for Kids (and Grown-ups Too!) 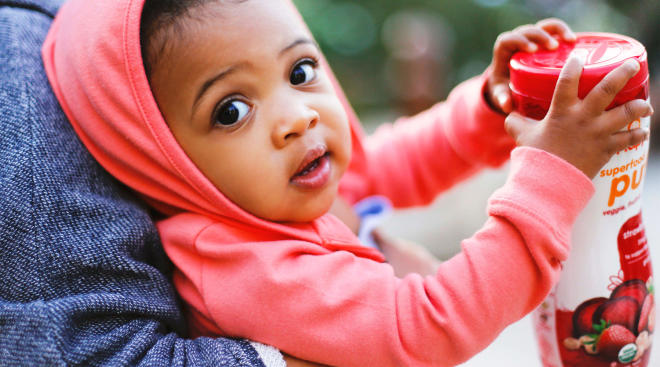 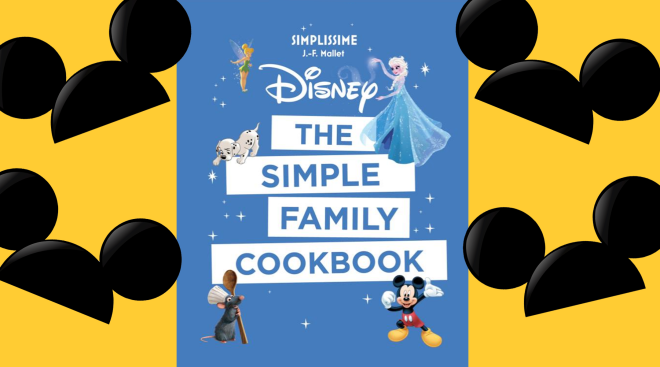 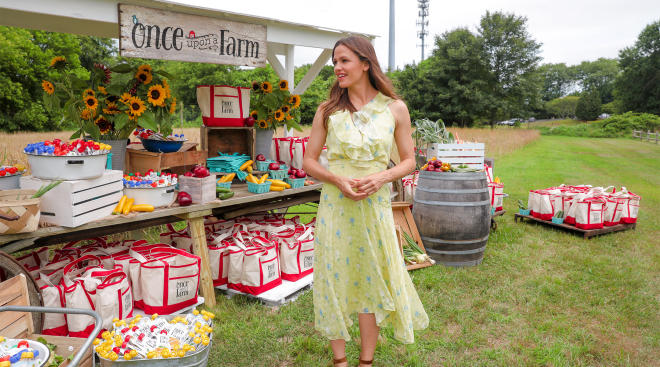 Jennifer Garner Plants the Seeds of a Fresh-Food Revolution 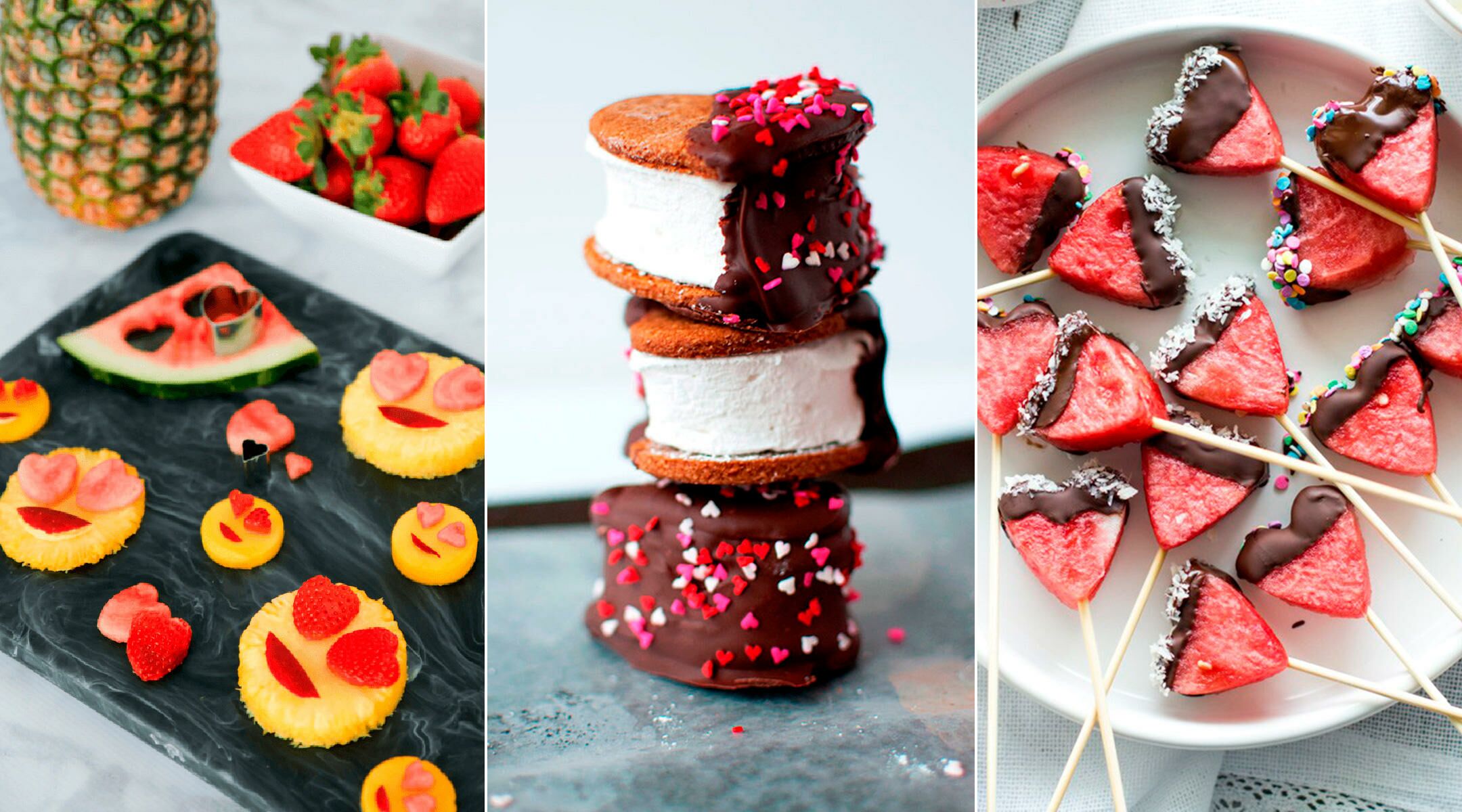 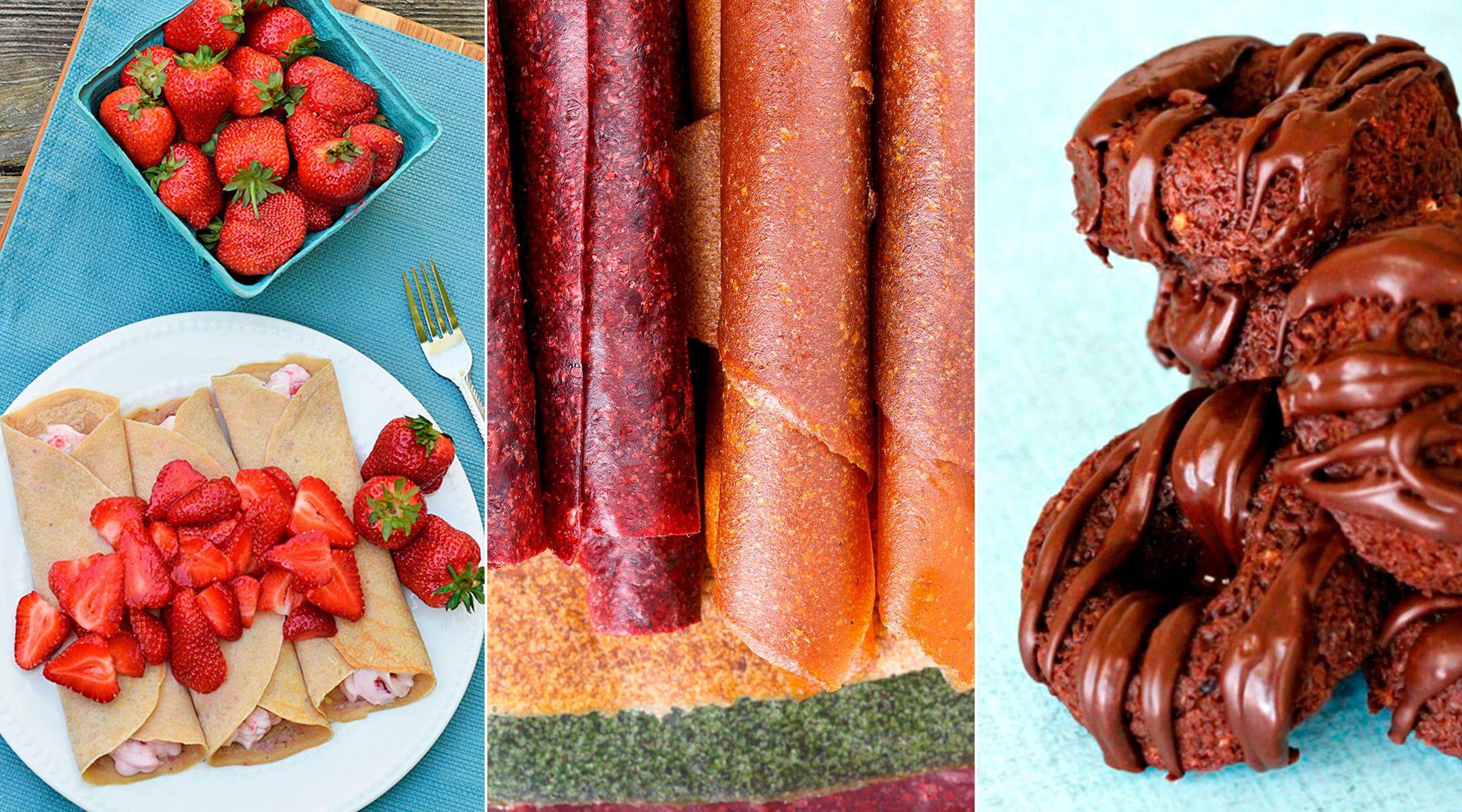 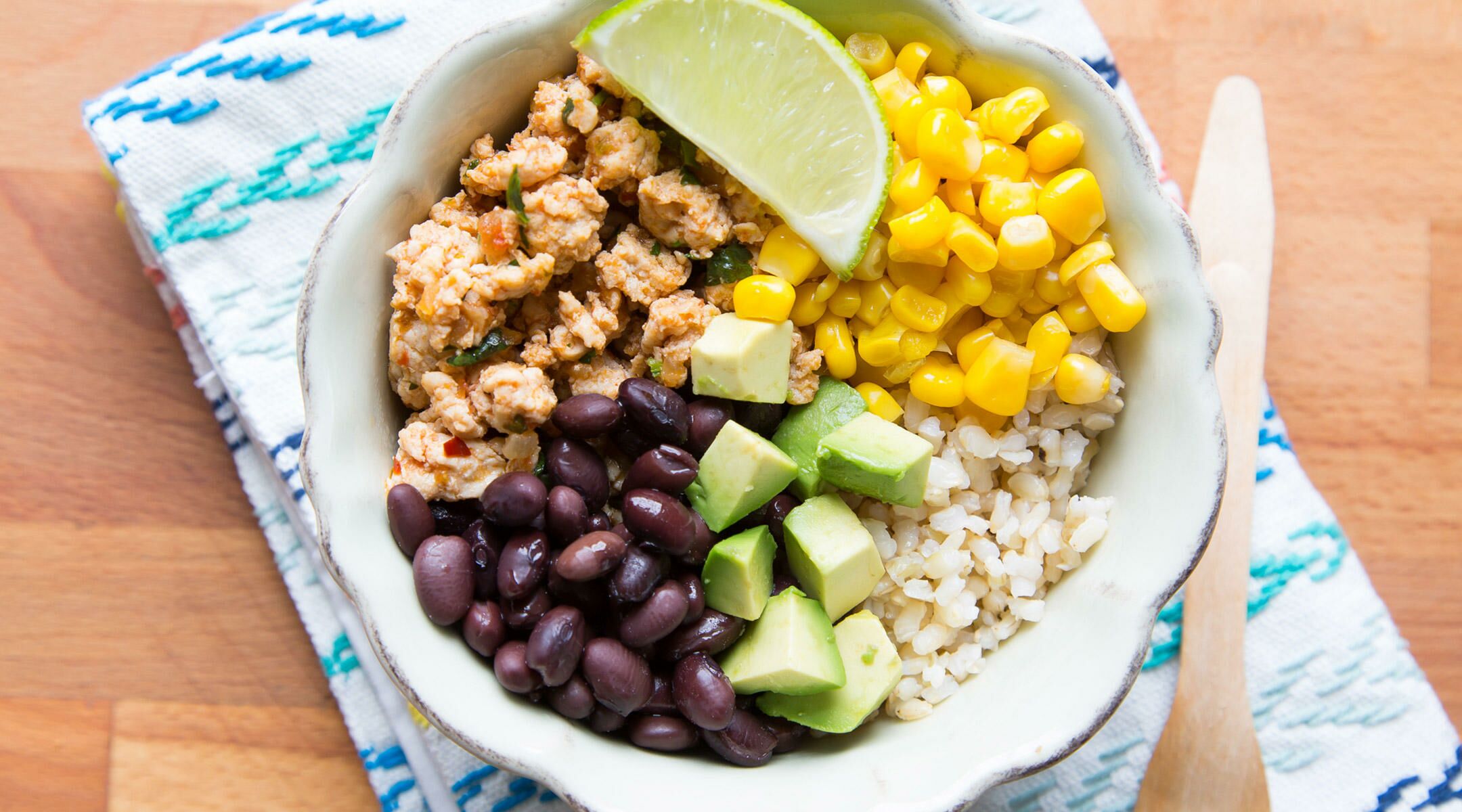 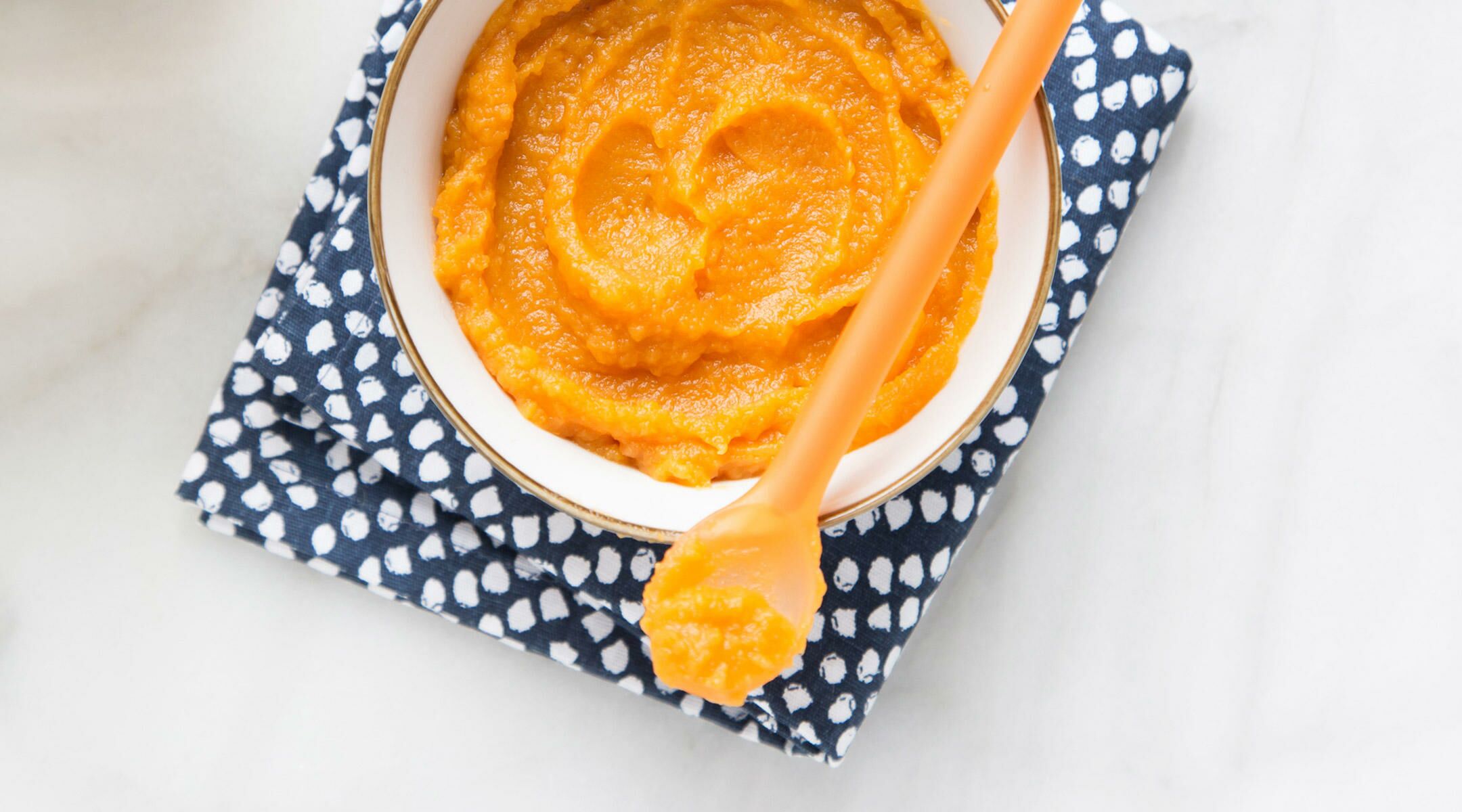 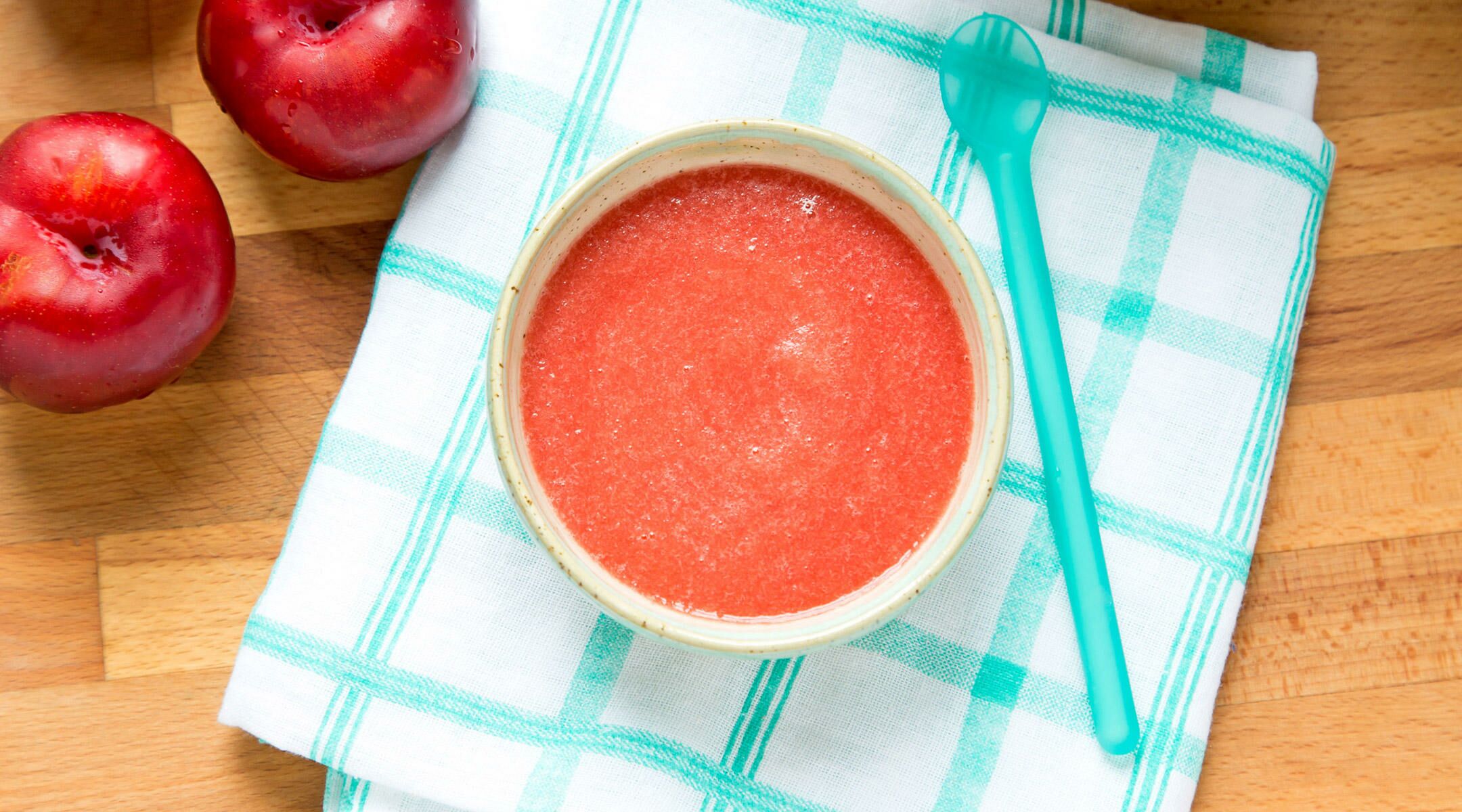 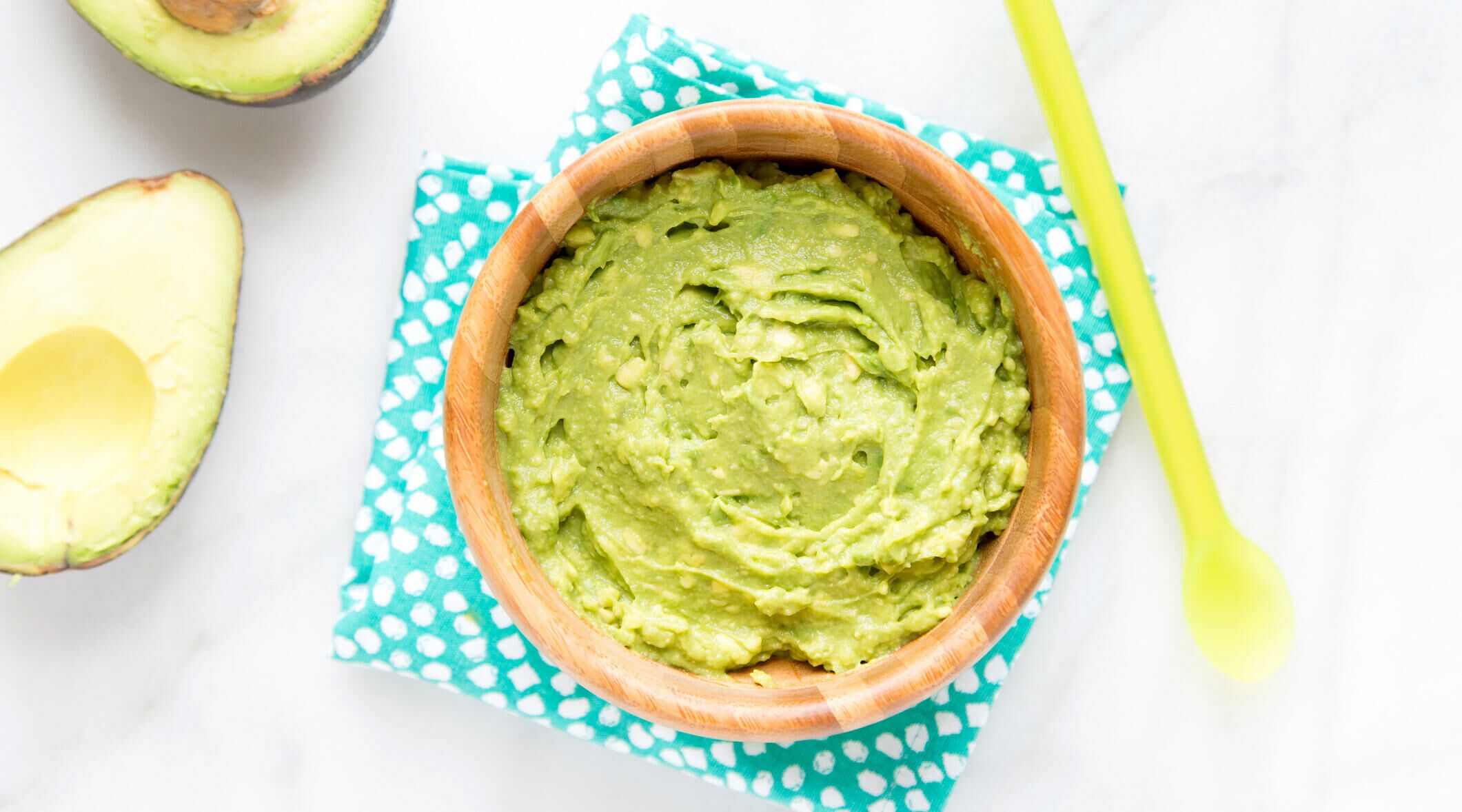 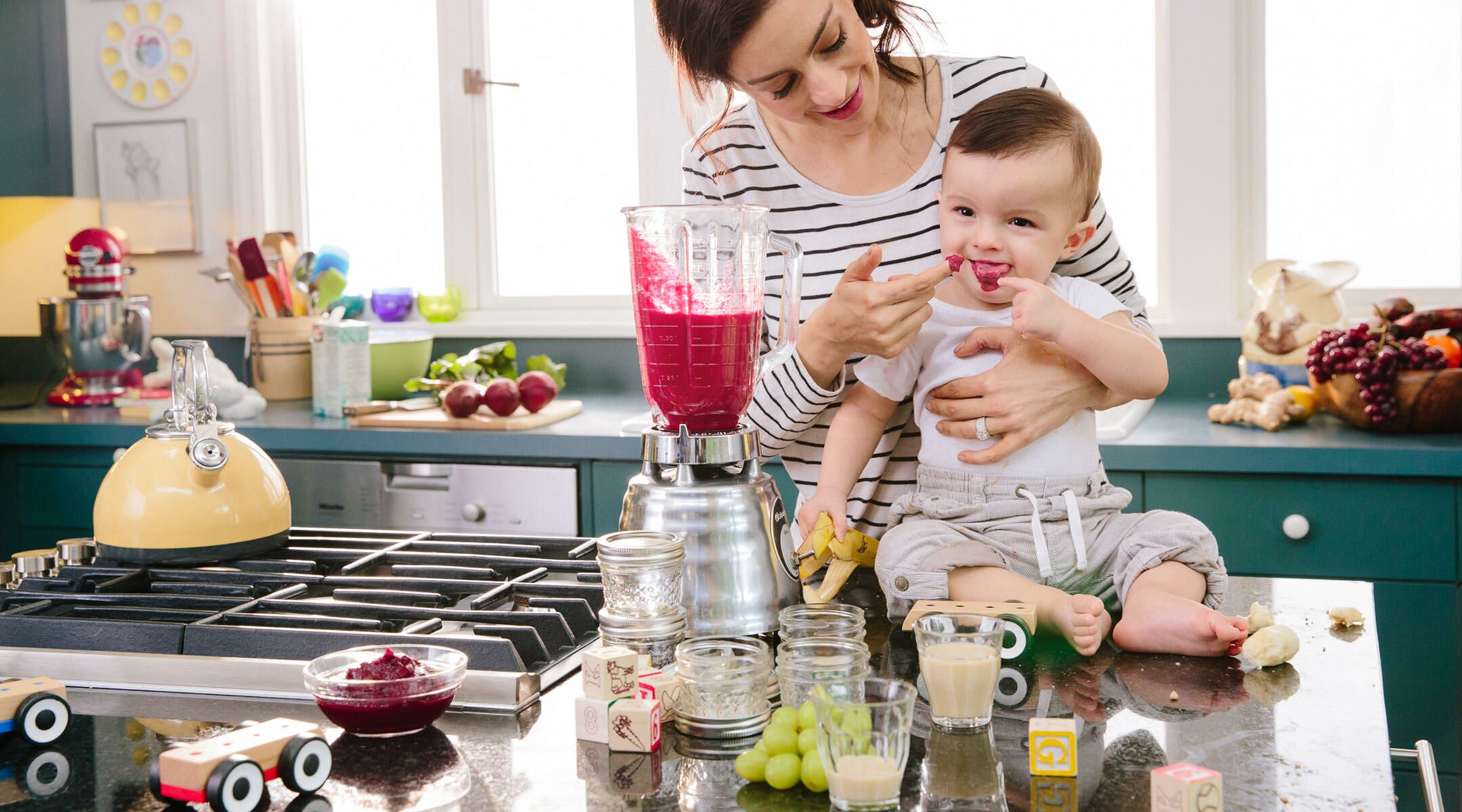 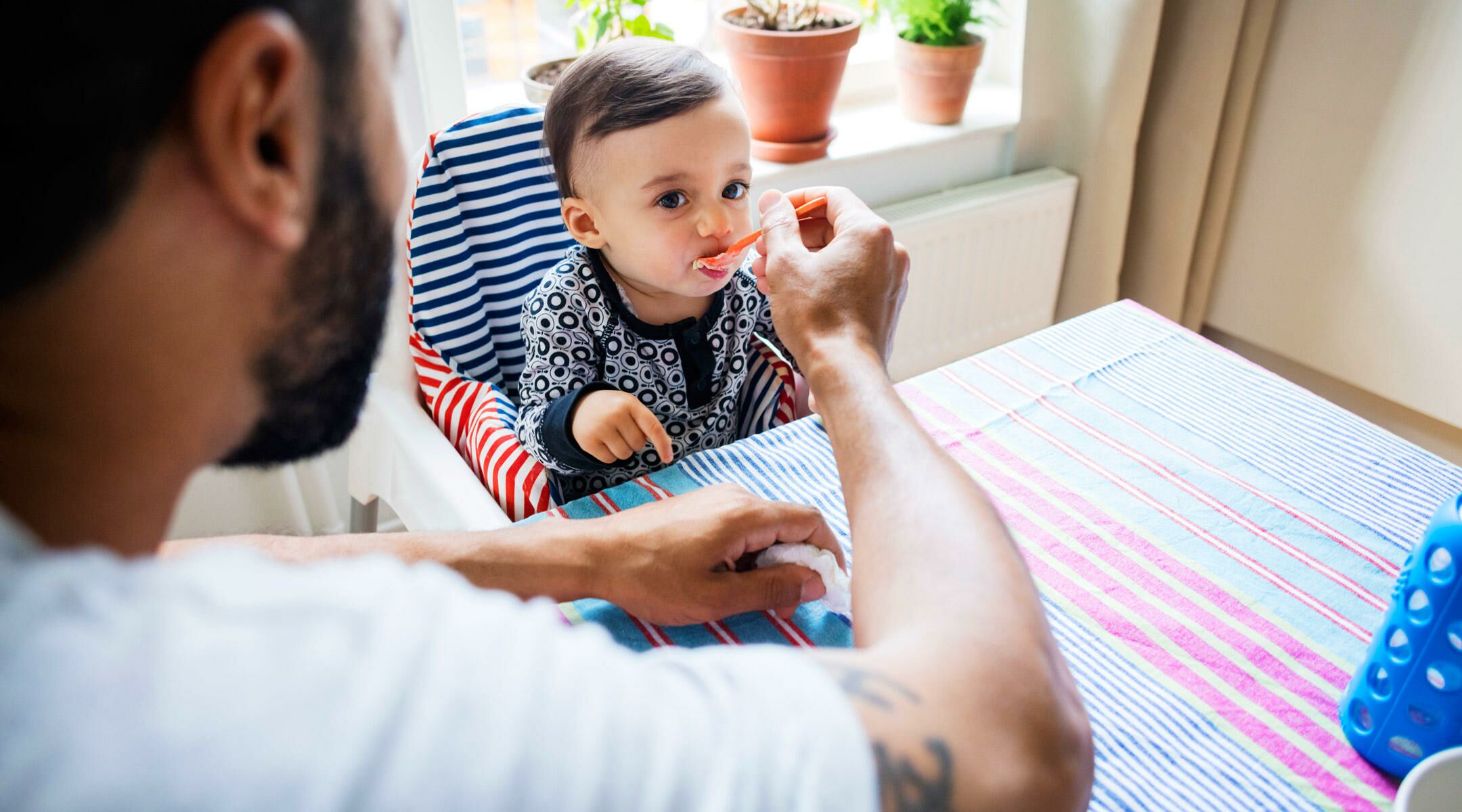 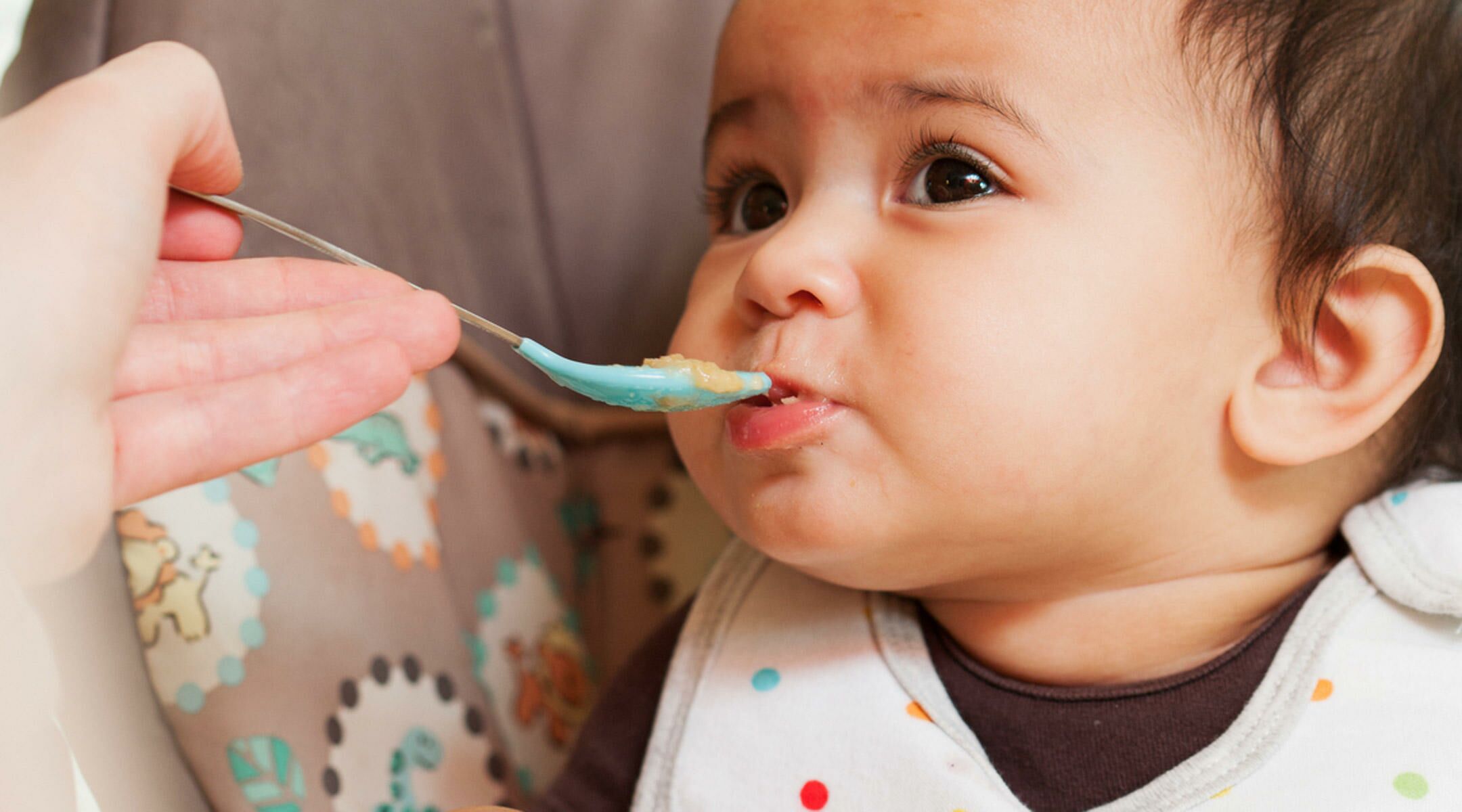