Confessions of a Fertility Doctor

Ever wonder why someone would work with eggs and sperm for a living? Or what funny things happen at the fertility clinic? Five reproductive endocrinologists reveal their behind-the-scenes stories. 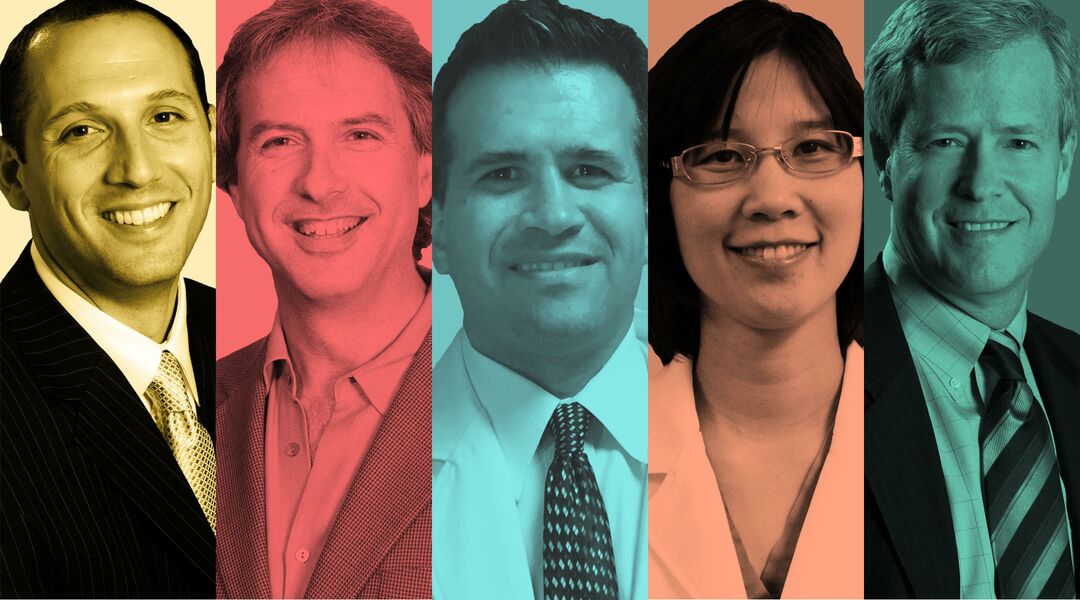 “We see patients at their best and their worst. I know if they stick with it, they’ll walk out with their family. The best part of my job is calling patients with positive pregnancy test results. I do the biggest fist pump in the world. But it’s not just inspiring moments like that—there are also some pretty funny moments too. I’ve had patients who wanted to lie down for three weeks after the procedure—they were afraid the implanted embryo would fall out! And let’s not forget the guys. Let’s put it this way: When you have eggs, you need sperm. The guys go in the ‘production room’ and everyone knows what goes on in there. We used to have DVDs and guys would invariably steal them and take them home. There was a series of Jenna Jameson videos I remember that had to keep getting reordered—and yes, there was one person whose job it was to keep porn in stock. The guys would take the disc and leave the case, so we had all these empty cases around. We changed over to streaming videos and solved that problem!” —Joshua Hurwitz, MD, Reproductive Medicine Associates of Connecticut

“No one wants to use donor eggs right away, but they come around.”

“One of the hardest things is telling patients their ovarian reserve is so low their only hope for pregnancy is to use donor eggs. That is devastating. If you think about it, most women, from the time they were young girls, wanted to have babies. Initially no one wants to use donor eggs. People come in saying, ‘I know how old I am but I know there’s one good egg in there and I want to find it.’ But women run out of eggs at a pretty rapid rate. When I tell them, they’ll say, ‘But I just read that a Hollywood star was 48 and had twins!’ Sometimes those [celebs] don’t say they used donor eggs because their publicist wants everyone to think they’re a superstar. A lot of times these women get upset with me and go see someone else. It’s like getting a cancer diagnosis in a way. They don’t want to accept it at first. They’re grieving the ability to have their own genetic child—they’ve got to go through a process. And often they’ll come back to me.

The amazing thing with donor eggs is that there’s no rejection. If you get a kidney transplant, there’s a 50 percent chance of rejection and you need to take anti-rejection medication. But there’s no need for that kind of medication with a donor egg. We don’t know why but they essentially work better than a woman’s own eggs. And no woman has come to me after using a donor egg saying she doesn’t think of the baby as her own. Some of them even say that sometimes they forget! We like to joke with our patients that we don’t have a return policy. But no one wants to exercise it anyway, so it all works out great.” —Kaylen Silverberg, MD, Texas Fertility Center

“I think mental health and infertility have a similar stigma.”

“I have two daughters, and while I have no personal experience involving infertility treatment, I do understand what my patients are going through, just being married and being a father. I know how important the biologic need to have children and an offspring is. Next to food, it’s the most primordial urge you have. I look at fertility and I think there’s a stigma. Sort of how some people think about mental health—these are more taboo problems. They’re not quantified by, ‘I have pain, so something must be wrong.’ If you look at the statistics, you see that most people with fertility problems don’t seek help—only a small fraction do. In some cultures, fertility treatments might be frowned upon, or they might worry it could hurt their marriage, and that their partner wouldn’t accept them if they were infertile. Some people just don’t want to know there’s a problem because they see it as a personal weakness. But it’s uncontrollable of course. It’s just like if you had a broken arm, kidney damage or liver failure—you need medical treatment to help you overcome it, and there’s nothing wrong with asking for help. One thing we commonly hear when people finally do become pregnant is that their biggest regret is they didn’t start sooner.” —Jesse Hade, MD, Boston IVF - The Arizona Center

“It was a little awkward being pregnant while seeing patients.”

“I’m a mom and it’s a very interesting experience to be pregnant at the same time as helping others trying to get pregnant. When I was pregnant, I was very careful about not talking about it. Most of my patients didn’t say anything, but a few felt comfortable enough to ask about it, especially late in the pregnancy. I respect that some wanted to talk about it. Fertility treatment is really hard to go through. There are sometimes injections, and many times patients cry. I make sure they feel they can share everything or ask me anything. If they did bring up my belly, I’d just say, ‘Well, I’ll try to do the same for you!’ I always make it about the patient, not about me. The focus should never be on the doctor—only on the patient. As a mom, I understand the urgency of wanting to have a child for infertile patients. It’s a very interesting dynamic.” —Janelle Luk, MD, Neway Fertility

“I switched careers from music to medicine.”

“I had a very different experience than most people. I was not personally devoted to becoming a doctor early in life. I was a musician, [but] I realized making a career in music was a hazardous direction to go in, so I went to medical school. I was interested in the fine art of the little things that go a long way, like interaction with patients, so this is the perfect field for me. I get to make a lot of judgment calls about what is the right treatment for each patient. Everyone is different and I love figuring out that puzzle: What can I fix in each patient’s situation that’s going to solve the problem? I also love that this field is so advanced in technology. We’ve been riding the wave of technology for the past 20 years, and it shows no sign of slowing down. A lot of my patients work in the dot-com world and it’s great to help people who are into technology reach their goals using technology. The new chromosomal screening for IVF is a very valuable one that helps us find and use the healthiest embryos. It offers a pregnancy success rate of 70 to 75 percent, and people are able to save embryos for a future pregnancy. Egg storing has grown tremendously as well. Probably about twice as many people are doing it this year compared with last year. Facebook and Apple decided to cover the cost of their employees freezing eggs, and I look forward to taking care of those people and helping them through the process. It’s been wonderful helping patients build families. I’ve never had more fun than I’m having today.” —Philip Chenette, MD, Pacific Fertility Center