Whether there’s a small chance you might one day consider in vitro fertilization, or you’ve already started the process, you’ll want to know the inside scoop on what’s involved.
Save article
ByElena Donovan Mauer
UpdatedFeb 2017 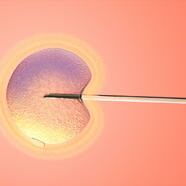 Do you need IVF?

Women who want to get pregnant usually see a fertility specialist after they’ve been trying to conceive for a while — but don’t wait long, say experts. “The recommendation is that if you’ve been having unprotected intercourse for a year and you’re under 35, you should be evaluated by a fertility doctor,” says Cynthia Murdock, MD, staff physician and fertility specialist at Reproductive Medicine Associates (RMA) of Connecticut. “It you’re over 35, you should only spend about six months trying before you’re evaluated.”

“Don’t dilly-dally,” emphasizes Jeffrey Steinberg, MD, FACOG, reproductive endocrinologist and US Director of the Fertility Institutes in Los Angeles. “IVF has greatly improved over the years and works very well, but after age 40, the success rate really plummets. Be your own advocate and watch out for yourself. Age is the number one enemy in this process.”

So how do you find the right fertility center? You can ask around for recommendations, but you should also do some of your own research. “Look on the Centers for Disease Control and Prevention (CDC) website, where you can see which centers have good pregnancy rates,” says Murdock. “You’ll also want to see the multiples pregnancy rate, the triplets rate, and how many embryos are usually implanted,” says Murdock. Having twins — and especially triplets — is considered risky, and while implanting multiple embryos may increase your chances of getting pregnant, it also may increase the risk of complications and health problems, so weigh all the stats carefully, she says.

Seeing a specialist doesn’t mean you’re instantly on the IVF track. You’ll get a full work-up that includes blood testing, an ultrasound of your ovaries and a check that your uterus is healthy. Your partner’s sperm count will also be evaluated. “Make sure they know the man’s sperm count — that should almost be the very first step,” says Steinberg. “It’s the guy who has a fertility issue 50 percent of the time. And he just has to give a sperm specimen, while the woman gets put through the ringer. It’s not fair to put her through all of that without knowing about the sperm.”

If you’ve got blocked  fallopian tubes or he has a low (but not too low) sperm count, your doctor will likely recommend IVF. But they probably won’t if you have poor ovarian reserves. Some other issues, such as anovulation, might mean trying less invasive treatments, such as fertility medication, before giving IVF a shot, says Murdock.

Given the green light for IVF? Your doctor will probably say, “Call us when you get your period.” After you do, you’ll probably be given fertility medications. Common ones include Clomid, which is a pill and given to women who make eggs but don’t release them. Or it may be an  injectable medication to help your body produce more than one egg in a cycle.

Yes, we said _injectable _and you’ll administer the shots yourself. But don’t freak out, says Steinberg. “It’s the kind of little needles that a diabetic uses,” he says. “Women worry about using them, but it’s a painless injection and we show them how to take it. Patients often say, ‘I can’t believe I lost sleep over this!’”

You’ll take medication for about three weeks, until the eggs are ready to come out. During this time, free up your schedule, as you’ll be taking frequent trips to the doctor — about three to five times in a 12-day period — for ultrasounds and blood tests to see how those eggs are doing. When your doctor says they’re ready, it’s time for what’s lovingly referred to as a “ trigger shot,” an injected medication that causes you to ovulate. 36 to 37 hours later, the eggs are ready to be extracted.

We know what you’re dying to know about next: The side effects. Well, the medications involved in IVF can affect some women barely at all or a whole heck of a lot. There can be symptoms similar to menopause — hot flashes and irritability. “We warn the husbands and partners that the woman will be put on an emotional roller coaster,” says Steinberg.

There may also be symptoms similar to pregnancy, such as nausea, breast tenderness and sensitivity to sunlight. “Wear heavy sunblock because you’re at higher risk for chloasma,” says Steinberg.

For the egg extraction procedure, the doctor will use an ultrasound camera (yup, inserted down there) to find the eggs in your ovaries and suck them out using a catheter. There may be anywhere from five eggs to 50! And no, it’s not fun, but you’ll be under local anesthesia.

Your partner will leave a sperm sample in the way you can probably already imagine, and four hours later, a tiny needle (one one-hundred the size of a human hair!) will be used to inject a single sperm directly into the egg. The cool thing about the ability to pick up just one sperm, is that specialists can screen them and filter out any sperm that are abnormal or low quality — weeding them down to the most likely to fertilize that egg.

Next comes a pretty tense few days, where you’ll be constantly worried how your little embryos are doing. The fertilized eggs will be carefully stored in an incubator until they become embryos. They’ll be tested to see if they’ve been fertilized properly, and you might get a phone call telling you how many were. Three to five days after the extraction, goal is to have at least one healthy embryos ready to transfer into your uterus. There may even be more than one — if so, you may have to decide whether or not you want to try more than one, with the chance that you could have multiples.

Now, there’s an alternative scenario that might play out. You doctor might tell you that your body isn’t ready for embryo transfer and that you should wait until it is. Your embryos will be  frozen and saved for another date — the good news is that frozen embryos have just as good of a success rate, if not more so, than “fresh” ones do.

Whenever you have your embryo transfer, you’ll have to wait until two weeks after to take a pregnancy test. (We hope it’s positive!)

Your chances of success

Of course,  medical advances seem to be constantly improving those odds, and many couples use more than one round of IVF to get pregnant. “If you’re under 35, after two cycles, you should be pregnant,” says Murdock. “If you’re older, we’ll likely to have to do more.”

If you haven’t tried IVF yet, you can probably imagine that it can be stressful. There’s the frustration of facing infertility, the physical side effects of fertility drugs, the chaos of seemingly endless doctor’s appointments, and the fear of going through all this and still failing. But, “stress is the number one anti-fertility hormone,” says Steinberg. And while  anti-stress techniques such as acupuncture, yoga and massage aren’t proven to boost fertility, they may help you through the process emotionally. The potential that they could help IVF work is just bonus! Other things that can help are speaking to a therapist, joining a support group and talking to other women going through the same things as you. Find some on our Infertility board.

And even though IVF can cause stress, it shouldn’t be scary. “The small minority of people are uncomfortable during it and have a rough time,” says Steinberg. “Don’t believe the bad things you may hear.”

How Much Do Fertility Treatments Cost?