“Reciprocal IVF let both my wife and me participate in the process—but did we really feel equally a part of creating our children? Yes and no.”
facebook
twitter
copy link
share
save
ByChristina Bailey
Co-Creator of Baby Bailey Mama Drama
PublishedOct 2019

Parents are usually terrified of the day their kids ask them: Where do babies come from? But as an LGBTQ parent, there are so many different answers to this question, none of which are scary—just a little more complicated. There’s never just one simple way for same-sex couples to go about making babies. Before my wife and I had kids, we explored our options but knew we were leaning toward reciprocal IVF. Why? Because it would enable both of our bodies to be involved in the process, so neither one of us would feel like we didn’t play a role in creating our child.

Reciprocal IVF is the process in which one woman has her eggs removed and fertilized by sperm, and then the fertilized egg, now called an embryo, is transferred to the other woman’s uterus. I had my eggs withdrawn (twice, after facing problems the first time), and after my second batch of eggs was successfully fertilized by our donor sperm, two embryos were transferred to my wife Katie. Both took, but one unfortunately miscarried, leaving our one baby at high risk for the majority of the pregnancy. My wife gave birth to our healthy baby girl, who’s now 3. All the embryos we didn’t use were frozen—but a little after our daughter’s first birthday, we had one transferred to my wife for our second child, and we now have two little girls in our family.

When we started our reciprocal IVF journey, we had a hard time finding lesbian couples who had done this process before. We searched the internet and came across only one family (that we still follow and admire today). When we went to our fertility doctor, they had never even done reciprocal IVF before on a same-sex couple. Today, the rise of reciprocal IVF is crazy! In fact, when you Google it, our faces pop right up. Before, it used to be just us and the one other couple, but now you can find quite a few. We’ve been referred to as “the poster lesbian couple for reciprocal IVF” (that’s a mouthful).

Reciprocal IVF is unique in that it let both my wife and me participate in the process—but did we really feel equally a part of creating our children? Well, yes and no.

It’s hard to accomplish what a heterosexual couple feels when they create a baby is that 50 percent each of them. That’s not a possibility for us, but we both yearned for a chance to be part of bringing a baby into our family. My wife carried both our girls. The first pregnancy was rough. While trying to create a child, we spent so much time crying, spending way too much money and worrying if we would ever have a baby that we forgot about our own personal feelings. When my wife finally became pregnant, we were ecstatic—but that joy dissapated when we faced the miscarriage of one baby and a high-risk pregnancy with the other. When we were finally out of the worry zone, our baby was almost born. But I won’t lie and say we both didn’t feel left out from time to time—in fact, we still face times where we feel left out.

When my wife was pregnant, she was asked questions that hurt her badly:

“Why are you a surrogate for Christina?”
“When will you have your own baby?”
“Will you feel left our knowing the baby isn’t yours?”

These were painful, seeing as the baby was both ours, but people still wanted to connect the baby to just me, because we used my egg. I, on the other hand, faced the issue of always being referred to as “the dad.” It was like there couldn’t possibly be two moms. Any class we took only identified a mom and a dad, and there were no other labels. I was never treated as if I were going to have a baby at work or by many others in our life because I wasn’t a pregnant woman.

After our daughter was born, my wife faced comments about our baby’s appearance:

“She looks so much like Christina.”
“Do you have baby pictures of Christina?”

If you were a heterosexual couple, these comments would normally be harmless, but to a same-sex couple trying to equally create a baby, they’re hurtful. We don’t want to hear about the baby’s appearance connected to only parent. I faced feeling left out when it came to topics such as nursing, the way your body feels after pregnancy and the instant bond our daughter had with my wife because I didn’t give birth to her. I attempted to connect with dads to understand what my stereotypical role was in our new baby life—but I still didn’t fully connect, because I’m not a dad, I’m another mom who didn’t carry our baby. 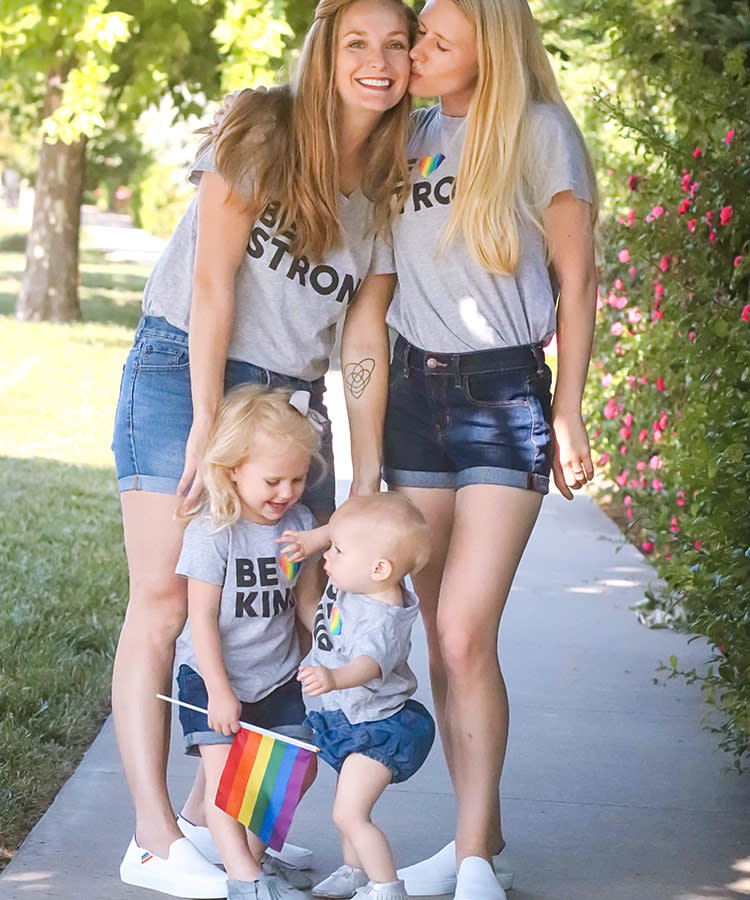 To this day, we feel that reciprocal IVF was the right choice for us. There’s no way for us to create a child and not feel left out in some way, but it was the best way for us to feel the least left out. We both played a part in creating our girls and we need to remember that, and try to stand strong when we hear comments that offend us. The questions we get from those who genuinely want to know more and admire how we created our family are the ones we enjoy answering. The questions that are doing more harm than good are ones we could live without. But we also understand that some comments aren’t meant to be hurtful. Some people just don’t know, and that’s why we’re trying to help explain those feelings. Perhaps one day there’ll be a way to create a baby that’s genetically half of each woman involved. Until then, reciprocal IVF is the best way for us and for many other same-sex couples to create a baby together.

We are a girl meets girl love story! My name is Christina and my wife’s name is Katie. We have two daughters, Kennedy (3) and Charlotte (1), who we had via reciprocal IVF. Our family is still growing, but for now, we’re enjoying our time as a family of four. We love to travel and show our kids as much of the world as possible. Follow us on Instagram at @babybaileymamadrama and Youtube.