We all want our kids to succeed—but here’s how to know if you’re being too hands-on and actually hurting your child’s emotional growth. 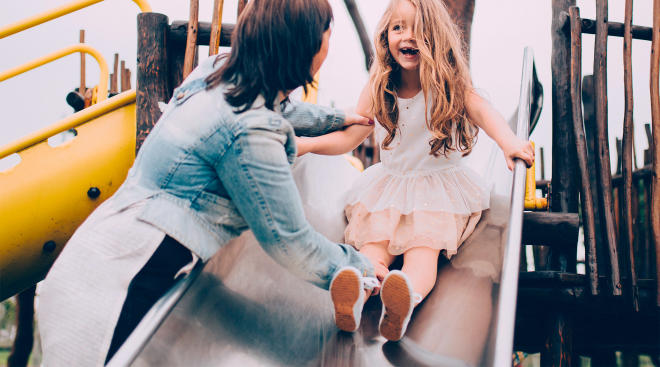 As a parent, it’s natural to feel those mama bear instincts kick in when you sense your child is in danger or needs your protection. After all, it’s our job to protect them and set them up for success. But there comes a point when kids need to learn to handle things on their own—and if we don’t back off, we’re in danger of becoming one of those always-ready-to-swoop-in parents you’ve likely seen at the park, on a playdate or at a kids’ birthday party, commonly known as “helicopter parents.”

What Is a Helicopter Parent?

“Helicopter parents, just like helicopters, hover closely and are rarely out of reach, whether their children need them or not,” says Fran Walfish, PsyD, a Beverly Hills, California-based family and relationship psychotherapist and the author of The Self-Aware Parent. “Partly enmeshed, partly worried and constantly assisting, this parent pays too-close attention to his or her child’s experiences and problems.” So that mom who bought a baby monitor for her day care center so she wouldn’t miss a moment? Or that dad who redoes his middle schooler’s homework to make sure everything’s correct? Totally helicopter parents.

Before the early 2000s, the term “helicopter parenting” wasn’t mainstream. But today, the parenting style is relatively widespread: In one national survey, 38 percent of college freshmen and 29 percent of college seniors said their parents intervened with school officials to solve problems on their behalf either “very often” or “sometimes.”

Helicopter parenting can have some positive benefits for kids, including:

• Greater awareness of a child’s abilities. “It certainly makes parents more aware of how their child is functioning in the world,” says John Mayer, PhD, a clinical psychologist at Doctor On Demand.

• Kids get lots of attention and dedication. “Parents are keenly focused on their role as parents, and moms and dads are more empowered than ever,” Mayer says.

• Greater dependence on parents, even into adulthood. “Out of what these helicopter parents believe to be love and generosity, they kind of cripple their children into becoming slightly dependent adults,” Walfish warns.

• Overlooking a child’s weaknesses. “Parents are so absorbed in their helicoptering that they don’t step back and collect the data on how their child is functioning,” Mayer says.

• Inability to cope with life’s challenges. Helicopter parents “neglect to do a full job of letting their child succeed or fail on his or her own merits,” Walfish says. “They’re worried about their child’s ability to function without them.”

Helicopter parents tend to keep their kids from experiencing struggle or failure. But let’s face it: What parents want to let their children feel disappointment and pain? Spotting helicopter parenting in action comes down to how a parent reacts to certain situations. Here, a few examples:

• When their child fails at something: If things don’t go as planned, helicopter parents will look for a way to reduce the pain of these situations—or may intervene to turn that failure around. So when their kid gets benched in baseball or fails a test, the parent may decide to take it up with the coach or teacher and argue, cajole or threaten their way to a better outcome. “There’s a consumer attitude in parents that didn’t exist in past generations—that is, parents are exercising their rights as consumers to get the best out of services for their kids, and that includes schools and teachers,” Mayer says.

• When their child wants to try something on her own: Helicopter parents may be concerned about letting kids go off on their own—you’ll see these moms insisting on joining school field trips and hanging out at drop-off birthday parties. “Helicopter parents hover over their child in fear that their son or daughter won’t succeed without their ever-present shadow,” Walfish says.

How to Not Be a Helicopter Parent

While all that love and attention can be a benefit for kids, helicopter parents need to let their kids learn to become independent, make mistakes and suffer an occasional failure so they develop the skills to succeed on their own. Here, some tips on how to avoid the pitfalls of helicopter parenting:

• Give your kids responsibilities. Chores are a great way for kids to learn to work on their own and develop skills they’ll need later in life. “As early as age 4, teach your child that they’re responsible for chores beyond dressing themselves, brushing their teeth and eating at mealtimes,” Walfish says. “Even kindergartners can make an honest attempt at making their bed before school, helping take the trash out, picking up clothes and putting wet towels in the hamper.”

• Don’t take over your child’s tasks. “Be brutally honest with yourself to own what is yours and not your child’s,” Walfish says. “Each time you feel the impulse to do something that’s your child’s responsibility, ask, ‘Am I trying to make my child’s life experience easier now but will set him up for disappointments later on?’” Even if your child’s homework isn’t perfect, refrain from jumping in to correct it and allow him to learn and develop.

• Let your kids struggle. It can be painful to watch your child stumble or fail—especially when you know you can make it all better by swooping in. But avoid the temptation: Life’s disappointments are, in fact, your child’s opportunity to grow. “If she falls, let her handle both the fall and the struggle to find a solution,” Walfish says. “Don’t rush in to fix anything. She may surprise you with good judgment and intuition.”

• Offer confidence-building encouragement. “Praise your children from a very early age with statements that promote a stronger sense of self-esteem and independence,” Walfish says. “Rather than saying, ‘Good job,’ which fosters dependency on pleasing Mom and Dad, you can phrase it as, ‘My girl is growing up. You must be so proud of yourself!’ or ‘That’s a good feeling you’ve got inside yourself!’” Such encouragement helps your child understand that accomplishing things on her own gives her a sense of satisfaction and pride.