Cutting-edge innovations in embryo testing and freezing almost seem like science fiction, but they’re not as out-there as you’d think. 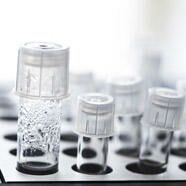 What if you knew that you carried a gene that could harm your baby or make getting pregnant nearly impossible? Or what if you were told that your chances of getting pregnant on your own were nearly zero? What lengths would you be willing to go? Advances in fertility medicine are helping couples who thought they could never have children of their own experience the joy of pregnancy, childbirth and parenthood.

Recent advances in preimplantation gene-tic testing — a step added to the  in vitro fertilization (IVF) process — allow doctors to screen embryos for genetic problems before they’re implanted. In IVF, egg and sperm are joined together in a lab. PGD happens next. Cells are taken from the resulting embryo (which is frozen right after) and tested to see if the embryo is viable. Healthy embryos are then thawed and implanted into the mother’s uterus.

“We can take one or several cells out of an embryo and ask genetic questions such as, ‘Does this embryo carry a disease like cystic fibrosis or Huntington’s, or a gene that only causes a risk for disease, like BRCA mutation, which increases the risk of breast and ovarian cancer?’ ” says Eric Widra, MD, medical director of Shady Grove Fertility in Washington, DC, and chair of the practice committee of the Society for Assisted Reproductive Technology. Cost for this type of testing ranges from $2,000 to $5,000, Widra notes.

PGD worked for Christina Leopold, who was only 19 when she was told she carries the gene for Fragile X, a rare genetic disorder, and had a 50 percent chance of passing it down to a future child. If the gene was passed, she was told the baby would have a 97 percent chance of having Fragile X. “I decided never to have children,” Leopold says. “I was really devastated.”

Years later, Leopold got married and had a change of heart. She and her husband researched  adoption but were put off by the cost — $5,000 to over $40,000. Then she learned that her health insurance covered 90 percent of the cost of IVF, which can run anywhere from $8,000 to $12,000. Leopold also learned that PGD could determine at the embryonic stage whether a baby was at risk for Fragile X, so she and her husband decided to give it a try.

Using blood samples from Leopold, her husband and her mother, doctors custom designed a test to see whether her embryos would have Fragile X.

Leopold had eight eggs harvested and then fertilized with her husband’s sperm. All eight embryos were tested — only one embryo carried the mutation. One of the other embryos was implanted and resulted in a pregnancy. Her son, Nico, was born in January 2014, and he’s perfectly healthy. The remaining six embryos are frozen in case she decides to have more children in the future.

“The most common reason for not getting pregnant or miscarrying is an embryo that has the wrong number of chromosomes,” says Widra. “So the other hot area of PGD testing is finding out which embryos have the correct number.” Testing costs between $2,000 and $5,000.

Jen Ruspantine’s first pregnancy ended with a miscarriage. The second time, a blood test showed the baby had a chromosomal condition; she and her husband chose to terminate. She learned that she carried a Robertsonian translocation, a rare chromosomal arrangement that makes it difficult to sustain a pregnancy and can cause chromosomal disorders such as  Down syndrome and Trisomy 18.

After another miscarriage, there was one chance left: IVF and PGD. Six embryos were created using Ruspantine’s eggs and her husband’s sperm. Only one survived, and it had a perfect chromosome profile. On July 27, 2012, the embryo was transferred into Ruspantine’s uterus. Nine months later, their son, Ryder, was born.

Egg freezing has come a long way in the last few years, says David Diaz, MD, of West Coast Fertility Centers in Orange County, California. The technology first became available in 2000, but its success rate then was low. Unlike embryos, which adapt well to the freezing and thawing proc-ess, eggs are more delicate.

But new freezing techniques developed within the last two years, including slow freezing and ultra-rapid freezing (vitrification), stop ice crystal formation, which can harm the eggs in the process. Because of that, more eggs survive freezing and thawing. Egg freezing costs from $5,000 to $10,000, and there’s no difference in cost between the two techniques.

Egg freezing helped Allie Marshall, who, in January 2014, at age 42, tested positive for pregnancy. The most surprising part wasn’t her age — it was the fact it was with an egg she had frozen seven years before.

“In 2007, I had just been through a divorce,” Marshall says. “I was 35 years old and feeling the clock tick. I saw an ad about egg freezing, and I thought, ‘If I can eliminate the pressure I feel when I’m dating, then that would be good.’”

Marshall remarried a few years later. Attempts to get pregnant on their own were unsuccessful — egg quality and, in turn, fertility decline as a woman ages— but she had five frozen eggs, made by her younger and more fertile self. When she and her husband were ready, they had IVF. Three eggs didn’t fertilize; two did and were implanted. One developed into a fetus. Egg freezing may also be an option for women with cancer who have to undergo radiation or chemotherapy.

High-tech treatments can help men in their plight to become parents as well. Chris Condit battled Hodgkin lymphoma at age 11. At the time, his future fertility wasn’t even a consideration. But later, when he and his wife, Mandy, decided to start a family, they found out there was a problem.

“After nine months of trying to conceive, my urologist told me I had zero sperm count,” says Condit. “And I probably wouldn’t have kids at all.”

The Condits switched doctors and found hope at Texas Fertility Center in Austin, Texas. Eighteen eggs were harvested from Mandy and fertilized using ICSI. With ICSI, a small needle helps the sperm do what they’re meant to do naturally — push through the outer layer of the egg in order to reach the nucleus and, hopefully, fertilize it.

Physicians include the cost of ICSI with the in vitro procedure (separately fees for the process range from $500 to $3,000). Fifteen eggs were fertilized. Out of those, two were viable. Both embryos were implanted but only one developed into a normal pregnancy. The couple’s daughter, Raquel, will be three in August 2014. And now, Mandy is pregnant with baby number two, conceived through a second round of IVF. She is due in November 2014.

The family is grateful for the technology that was available to them. “What changed our lives was knowing that we were going to be able to at least attempt to do an IVF,” says Condit. “And it was really something else, because after they do it, you get your first baby picture, which is a group of six cells. That’s Raquel’s first baby picture. She’s six cells.”