Hear one mom open up about her daughter’s stillbirth and how she and her husband are navigating this painful experience together.
facebook
twitter
copy link
email
save
ByJessica Sipe
Published September 9, 2019 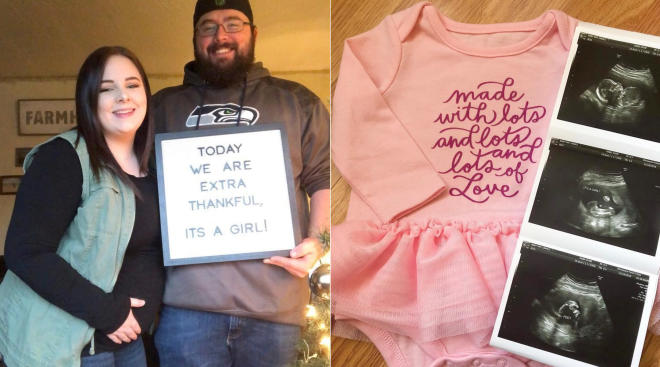 My husband Cody and I always knew we wanted kids—he often jokes he wants “5-ish kids,” whatever that means. When we got married we discussed trying for a baby right away, but since we honeymooned in Mexico, a destination with a risk of the Zika virus, we decided to wait. Waiting was so hard—it felt like forever—but we enjoyed the first six months of newlywed life.

And then after just two months of trying, it happened. I took a test a few days before I was set to start my period and a very faint line appeared. I couldn’t believe it, so I headed to the store on my way to work and picked up an early detection kit and a digital test. Sure enough, the extra tests came back positive almost immediately. This was really happening! I was freaking out but wanted to tell Cody in person so I had to keep my composure until that evening. Telling him had to be special, so I made a quick stop on my way home to pick up a cute onesie. I could hardly contain my excitement and handed over the box immediately. We were both so thrilled that we couldn’t wait to share the news with our families. We knew it was early, but we were just bursting with joy. Already we loved this little baby so tremendously.

My first trimester was rough. I was sick, all day, every day. No amount of saltines or ginger ale could curb the 24/7 nausea. Everyone told me that being sick equaled a healthy pregnancy and a perfect baby, and I believed them. Even though I was sick, I was so happy to be pregnant. I started showing right away and I felt beautiful. I was growing a life that would be a perfect mix of me and Cody.

Our 12-week scan and blood work looked perfect and the baby was measuring right on track. I was so excited to buy clothes for my growing belly and to share the news with everyone. I was a growing a life! At 18 weeks, Cody and I decided to find out the baby’s gender. Our family would be in town for Thanksgiving and we wanted to surprise them with the news. As luck would have it, baby had other plans. After almost an hour of jumping jacks, squats and laps around the building baby emerged from a curled up ball and revealed herself. It’s a girl! I had a gut feeling it was a girl but Cody was convinced otherwise. We cried and had the best time sharing our surprise over turkey dinner.

My second trimester was pretty uneventful. Once my nausea subsided it was just an occasional ache or pain or a little swelling. Our baby had a strong heartbeat at every check up, a great anatomy scan and she and kicked and flipped like crazy—even with an anterior placenta I could feel her moving constantly.

As I entered my third trimester, I started to get really excited. This was it, the final countdown! In 12 short weeks we’d get to meet our daughter. I passed my gestational diabetes test and went went in for my routine 28 week check up. My blood pressure was mildly elevated and I was experiencing some swelling so my doctor discussed preeclampsia with me—what signs to watch for, what to do, etc. My labs came back fine and the concern faded into the distance.

Thirty weeks arrived and I was filled with excitement but also anxiety. We had found the perfect new home for our growing family and I couldn’t wait to start decorating the nursery. Since my last appointment, I had done some additional research on preeclampsia and was scared. I tried to stay calm, reassuring myself that my labs were good and my baby was moving like crazy. Around 1 a.m. on February 13th, just hours from my 30-week doctor’s appointment, I woke in excruciating pain. At first I reasoned she was in a bad position. I drank cold water and layed on my left side, coaxing her to move. Nothing. I called the doctor on call who thought my symptoms sounded like kidney stones. I was told to take some Tylenol and drink some water. I woke Cody, but the pain continued. Something didn’t feel right so I called again and was instructed to come immediately to the hospital. The whole ride, all I could think was “she’s going to be okay, I’m far enough along her chances of survival are good, she’ll be tiny but still perfect.”

The hospital was expecting us and whisked us into Labor and Delivery right away. They took my blood pressure and temperature and tried to find her heartbeat with a doppler monitor. The nurse couldn’t find anything. In that moment, I didn’t think anything of it—the idea that she didn’t have a heartbeat wasn’t a thought in my mind. A doctor returned with an ultrasound machine. I immediately saw our baby’s sweet little profile, but the doctor said nothing. I didn’t see or hear a heartbeat. Holding Cody’s hand, all I could muster was “is she okay.” That’s when the doctor said, “I’m so sorry, there’s no heartbeat.” I couldn’t believe it. I was speechless, unable to say or do anything. I could hear Cody crying. I wanted to scream, CHECK AGAIN, YOU’RE WRONG, CHECK AGAIN. I was in such a state of shock I couldn’t even cry. The doctors and nurses stepped out to give us a minute alone. We called my Mom and Cody’s Mom. My Mom asked me if they were going to make me give birth. I just couldn’t believe it.

So much of what followed was a blur. Nothing felt real and I was experiencing so much pain, of all kinds. The hospital called my doctor and soon I was in a delivery room. All I could think was they’re wrong—how could they let me sit here with my daughter still inside me? This was not real life. Once I was settled they gave me some pain medication and an explanation. The doctors believed I had a placental abruption from preeclampsia. When I hear those words all the fears I had been having since my 28-week appointment were confirmed. This only happened in less than 1 percent of pregnancies. I never thought it would happen to me.

I was given magnesium for the preeclampsia and induced by IV. My cervix was softened thanks to a foley balloon and my water was broken to speed up the process. My doctor said it could take about 24 hours so I opted for an epidural. I couldn’t take any more pain. I was two centimeters dilated so we waited. And waited. I sent Cody home to grab a couple of important things like blankets for photos while my mom and mother-in-law stayed by my side. After what seemed like forever, I felt the urge to push. She was sitting in the birth canal and I could feel the pressure bearing down. I was terrified. I asked the doctor if I could hold her and asked if she would still be warm. At 9:59 p.m. on February 13, 2019, Hayden Rae Sipe was born.

At 3 pounds and 16 inches long, she was absolute perfection. She had Cody’s feet and his little ears, and my fingers, toes and squished up little nose. She was beautiful—everything I could have dreamed of and more. I could have stared at her all day, as every single feature awed me. Cody and I made her; she was ours. Every little bit of her, from her tiny hands to her toes, was perfection. She grew inside me, heard our voices, felt our love. Every fear I had before this completely disappeared the second the doctor handed her to me. After I held her in my arms it was Cody’s turn, and in that moment I saw him become a father. Even though our room was filled with so many sad emotions, his face lit up. He was so proud and so full of love. As much as I wanted to hold her, I wanted Cody to spend this time with her. He had waited so long for this. Hayden looked so tiny swaddled in his arms, so perfect. I had been picturing this moment for months. I watched him pace the room, talking to her, rocking her back and forth.

All of this wasn’t exactly what I pictured but it was more than perfect. This was my family, right here in this moment. I knew I would never get this time back so I soaked in every second, being as present as possible. We took turns holding her, talking about how perfect she was. Our doctors and nurses came in to meet her. It almost seemed like a normal night with a new baby, except ours never cried. Some hospital volunteers took a handful of photos of Hayden and took her hand and footprints and hand and foot molds. Everyone was incredible—we were well taken care of, checked on and loved on. The nurses held our hands, gave us hugs and cried alongside us.

After they took Hayden, I stayed in the hospital for another three days. As a result of the preeclampsia I needed more magnesium and additional monitoring, and afterwards I was released from the hospital. Leaving without our daughter was unexplainably difficult. I knew I would never get to hold her again. I would never get to see her sweet face, kiss her tiny hands or watch her grow up as I imagined I would. I cried the whole way home. I was holding a box of mementos and shaking from disbelief. Why do I have a box of only memories instead of my daughter? I wanted to jump out of the car. I was completely shattered.

Six months later, we’re not only grieving our loss of Hayden, but also the entire life we had been building for our family. Since the day she was born, it’s been a rollercoaster of emotions. Cody and I are learning to navigate this new reality without her—and it’s really hard. We have bad days, and some good days too. We still want more babies, siblings for Hayden who will know how important she is to us. She will be a part of their lives from the start and a part of our life forever. 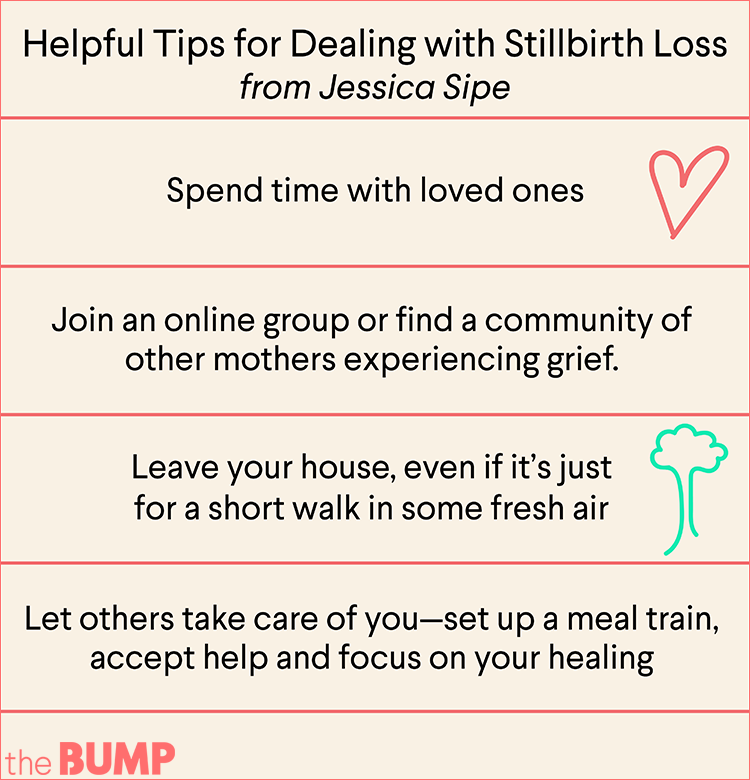 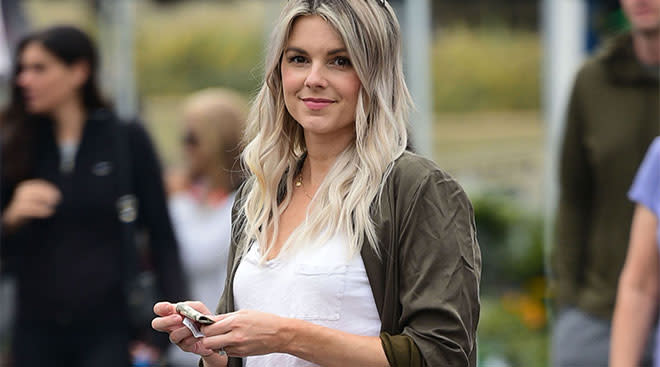 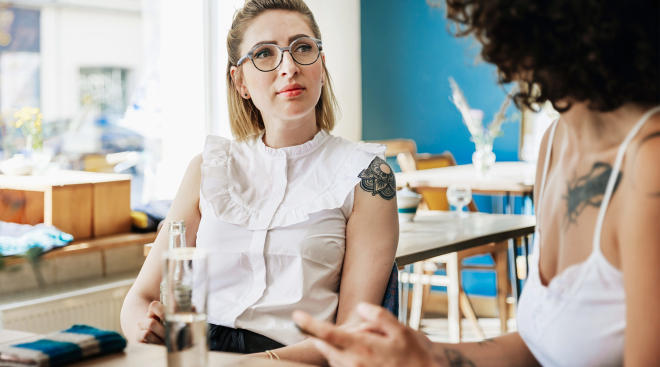