What Kind of Mom You'll Be, Based on Your Zodiac Sign

Wondering if you’ll be a fun mom or a flighty one? Doting or demanding? Here’s what kind of parent you’re fated to become, according to your zodiac sign. 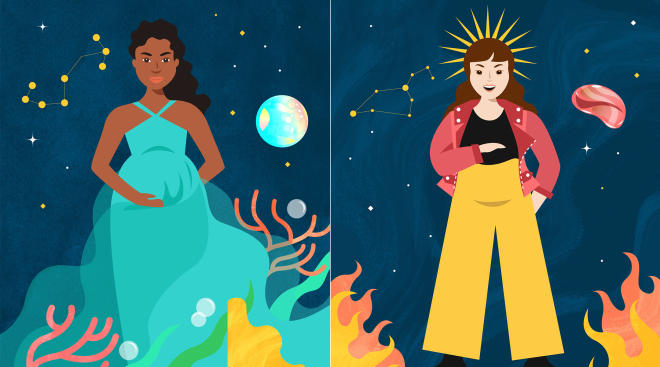 What mom-to-be hasn’t wondered what kind of parent she’ll be? Sure, you can read the baby books and come up with the beginnings of a parenting strategy, but the answer to your question might actually be written in the stars. Some say your astrological sign, based on how the planets and stars were aligned on the day you were born, can predict a whole range of personality traits—including your natural approach to parenting.

We turned to New York City-based astrologer Angel Eyedealism, who’s been giving readings from Manhattan’s East Village for over two decades, to get the inside scoop on what the zodiac says. For precise insights, she’d need details like the time and place of your birth, but these general predictions, based on sun signs, offer a peek into what kind of mom you may turn out to be.

“The geniuses of the zodiac, Aquarius moms can be wacky, wild and brilliant. As brainiacs, they bring intellectualism to motherhood and would encourage their kids to be well-educated and follow their dreams,” Angel says. Aquarians thrive on individualism and tend to be a bit rebellious—and often foster that rebellious streak in their kids, spurring them to challenge the status quo and make a difference in the world. “They typically want to be friends with everybody, so moms with this sign might be in danger of being more of a friend to their child than a parent. They’ll need to assert themselves and prove they’re the authority figure in the mix.”

“Perhaps the least practical of all signs, Pisces are more about instincts and feelings, and are very gentle, kind and compassionate. They’re super-sensitive to their children’s needs, but they also need to be reminded that kids need to learn things for themselves,” Angel says. “Pisces moms tend to be creative and musical, and encourage artistic endeavors for their kids. But they don’t have a good memory and often space out and forget things, so there should be somebody in the parental mix who can bring things down to earth and remind her of more practical matters.”

Ruled by Mars, Aries are the most action-oriented of the zodiac signs. “Aries moms are constantly on-the-go,” Angel says. “They typically encourage their kids to play sports and enjoy outdoor activities, and usually join in too.” As do-it-all kinds of moms, they’re known for not asking for help, she says, so if you’re an Aries, you’ll need to learn to delegate. “Aries women also tend to be bold and progressive, and are known for tough love. They’re the least domestic of all the signs and not the most patient, so when necessary, remind yourself to count to 10.”

“Tauruses are the most gentle, nurturing and patient of the signs, and make for very loving mothers,” Angel says. “They’re also the most materialistic sign, so a Taurus mom will want to surround her children with as much affluence as she can afford. She’ll always have money, food and shelter covered. Stubborn and practical, she’ll also want to teach her kids marketable skills for when they go off into the world.”

“Gemini moms tend to be chatty and very bright, but a little on the scattered side,” according to Angel. “They tend to be like children themselves—fun, playful, versatile, interesting and a little all over the place. Their ruling planet is Mercury, so they can be mercurial and inconsistent in mood, and need to learn how to be more stable and consistent in their parenting.” Quick-witted and intellectual, Geminis also tend to be excellent students and have thirsty minds, she says, and encourage their kids to learn as much as they can.

“Cancers are the mothers of the zodiac—they are mother to everything and everyone,” Angel says. “They’re generally shy people but come alive in a home environment. They are often excellent cooks and teach their children the bliss of domesticity. Cancers also tend to be on the passive side, and need to encourage their kids to stand up for themselves. But they’ll transform into streetfighters to protect their young. Sometimes overprotective, they can veer toward smothering their kids, so learning to give them room to grow is important.”

“Leos are kids at heart and need a huge amount of attention…They can make good mothers, [but] it’s important for them set aside their ego and learn to nurture their child,” Angel says. “They can be dramatic, but they can also be warm, generous and very creative. Leos can also sometimes get competitive with their kids…but they’re fun parents.”

“Virgos are the control freaks of the zodiac, so they have to be careful about being overly critical and learn to offer constructive criticism,” Angel says. “The classic Virgo is a bit of a germaphobe and is obsessed with cleanliness for their kids. They can also be hypochondriacs, so they have to be careful not to freak out every time their child has a cough or fever.” Virgos are also known for their intelligence and practicality, and are eager to pass on the same values in their kids. “They’re usually excellent at math and make good business people, and teach their children to be frugal and careful with their finances.”

“Libras are perhaps the most selfless sign, which is an important quality for mothers. They’re also gracious and grateful, so they’ll raise their children to have good manners and to be thoughtful and considerate of others,” Angel says. “Libras are famous for their indecisiveness—they think about every single aspect of the equation, and want the best for their kids. They strive to provide beautiful homes for their children and want them to go to university and broaden their horizons, both intellectually and culturally.”

“Scorpios make excellent mothers,” Angel says. They tend to be intense, passionate people who commit to things 300 percent—especially when it comes to raising their kids. As all-or-nothing kind of people, she says, Scorpios often need to learn to embrace moderation and rein in their tendency to be stubborn, suspicious and jealous. They don’t trust easily, but when they do, Scorpios prove to be incredibly loyal. “The most observant sign, Scorpios are always watching and use their eagle-eyes to protect their children—but they see so much that it tends to make them edgy,” Angel adds. “They can use that to teach their kids the importance of trusting their instincts and how to get in touch with their creative impulses.”

“Sagittarius moms love the great outdoors and are definitely not inclined to be couch potatoes. The first shoes she’s going to buy for her kids are hiking boots,” Angel says. “As a fire sign, they’re not known to be the most patient, but they’re very good natured people, so when they lose their temper, they get over it quickly.” Sagittarius moms also tend to be forward-thinking and action-oriented, and raise their kids to be optimistic and colorful. ”Since Sagittarius is the sign of travel, they want to show their children the world and teach them to broaden their horizons through hands-on learning,” she adds. “Instead of just Googling the pyramids, she would actually take the kids to see them in person.”

Kindred spirit: Elastigirl in The Incredibles

“The ball-busters of the zodiac, Capricorns tend to be strict disciplinarians,” Angel says. “They’re always concerned with boundaries and rules and regulations, and tend to be very black and white in their views. It doesn’t mean they can’t be good mothers, but they need to soften up a bit. They’re not always the most nurturing, but they’re responsible, reliable and very hard working, and teach their children the importance of gaining people’s respect and earning their living. A Capricorn mom typically has a very strong moral compass and would instill clear moral values in her child.”