Cow milk, almond milk, soy milk—oh my! Here's how to understand the differences between all the types of milk out there and what's best for your little one.

Since there are so many new “milks” on the market, it’s often confusing to know which is the best one to give your child. As pediatricians, we’re are often asked by parents weaning their little ones off breast milk or formula which is the best milk to use after age one. Here, we’ll discuss how much dairy is recommended for a toddler, the nutritional composition of milk alternatives and our top picks for parents.

Dairy provides fat, protein, vitamins and minerals for infants and young children. In infancy, the majority of calories come from breast milk or formula, but starting at age one, you can start to introduce cow’s milk into their diet. Dairy is still an important source of dietary fat, which continues to be important for brain development. From 1 to 2 years of age, the American Academy of Pediatrics (AAP) recommends that toddlers consume two servings of dairy per day, which is the equivalent of 16 ounces of milk.

Most children will continue on whole cow’s milk until age 2, but in some cases, the AAP recommends starting reduced-fat milk between 12 months and 2 years of age in children who are at risk of being overweight, or whose families have a history of obesity, heart disease or high cholesterol. From 2 to 3 years of age, approximately 2.5 servings of dairy is recommended daily and your child can switch to low-fat or nonfat milk.

Some children, however, may not drink any milk—and that’s okay, especially if they consume good sources of calcium and vitamin D from other sources, including cheese and yogurt. In fact, many pediatricians don’t want children to drink more than 16 to 20 ounces of milk a day, because milk can fill children up, preventing them from eating more nutritious foods. Additionally, too much milk consumption could also lead to iron deficiency (calcium blocks iron absorption) and subsequent anemia.

So what consitutes a serving of dairy?

The Rise of Milk Alternatives

Milk alternatives have become more popular over the past decade as some families choose to be dairy-free. Additionally, some children are allergic to milk protein. In both cases, milk alternatives are important to make sure your child is getting enough protein and calcium. Understanding the difference between your options can help you choose the best one for your child.

What do we mean by milk alternatives, exactly? Common milk alternatives include soy, coconut, rice and nut (cashew, almond) milk. Hemp milk, oat milk and milk made from pea protein are also available alternatives. Some will be found in the refrigerator next to cow’s milk, while others are found in boxes in the beverage section of your supermarket.

It’s possible that the lower levels of protein found in milk alternatives can impact children’s growth. Results from one study show that children who drink milk alternatives may be shorter than children who consume cow’s milk. The study, published in The American Journal of Clinical Nutrition, collected data from over 5,000 healthy Canadian children from 2 to 6 years old. The authors stated that each cup of milk alternative that a child drank each day was associated with an average decrease of 0.4 centimeters in height. A potential reason why their growth was lower? Many of these alternative milks do not contain enough protein and fat. More studies are needed to confirm this relationship, but the results do help raise awareness of the nutritional differences of milk and milk alternatives.

A Note About Soy Milk

There is a lot of conflicting evidence on the consumption of soy products, such as tofu, edamame and soy milk, and there is limited research on their effects in children. The debate stems from soy containing isoflavones or phytoestrogens, which are chemically similar to estrogen. On a positive note, soy has been linked to lowering the risk of osteoporosis, heart disease and breast cancer, but because it resembles estrogen, it has also been thought to be associated with infertility. The AAP states that there is no conclusive evidence in animal or human studies that soy will have a negative effect on development, immune, thyroid or reproductive functions. We agree that more studies in children are needed before a definite recommendation can be made, but as many cultures have been safely eating soy products for years, soy is likely safe to consume in moderation as part of a well-balanced, diverse diet.

Dairy provides an important source of protein for toddlers. If you’re choosing a milk alternative, we recommend choosing one that contains protein and is most similar in caloric content to cow’s milk. Almond, coconut and rice milk contain a minimal amount of protein, while hemp and oat milk both contain some protein. Newer to the market is Ripple Milk, a pea-based protein milk, which contains calories and protein more comparable to cow’s milk.

In general, using a toddler formula is unnecessary. Whichever milk or milk alternative you use, it’s important to speak to your pediatrician and possibly a dietitian to ensure that your child’s diet is not deficient in protein or vitamins and minerals. 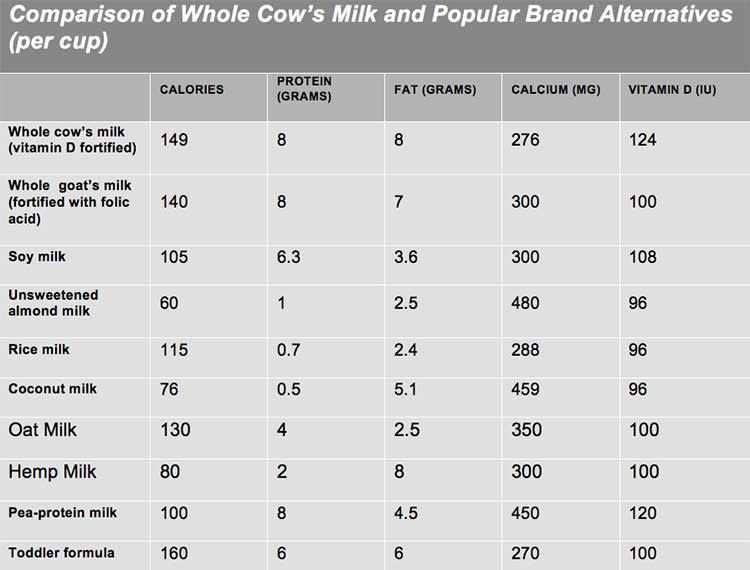 Dina DiMaggio, MD, is a pediatrician at Pediatric Associates of NYC and at NYU Langone Medical Center. She has received numerous research awards, along with Patient’s Choice award, compassionate doctor recognition and was featured in the New York Times Magazine as a Super Doctors and New York Rising Star. She and Anthony Porto coauthored the book *The Pediatrician’s Guide to Feeding Babies and Toddlers.

Anthony Porto, MD, MPH, FAAP, is a pediatrician and pediatric gastroenterologist at Yale New Haven Children’s Hospital and the medical director of the Yale Pediatric Celiac Program. He’s also an associate professor of pediatrics and associate clinical chief of pediatric gastroenterology at Yale School of Medicine. He has won numerous awards including the Norman J. Siegel Award at Yale University for leadership and providing outstanding clinical care as well as Physician of the Year during his time at Morgan Stanley Children’s Hospital. He has been named Castle Connolly Top Doctors since 2012. Vitamins for a Picky Eater?
ADVERTISEMENT