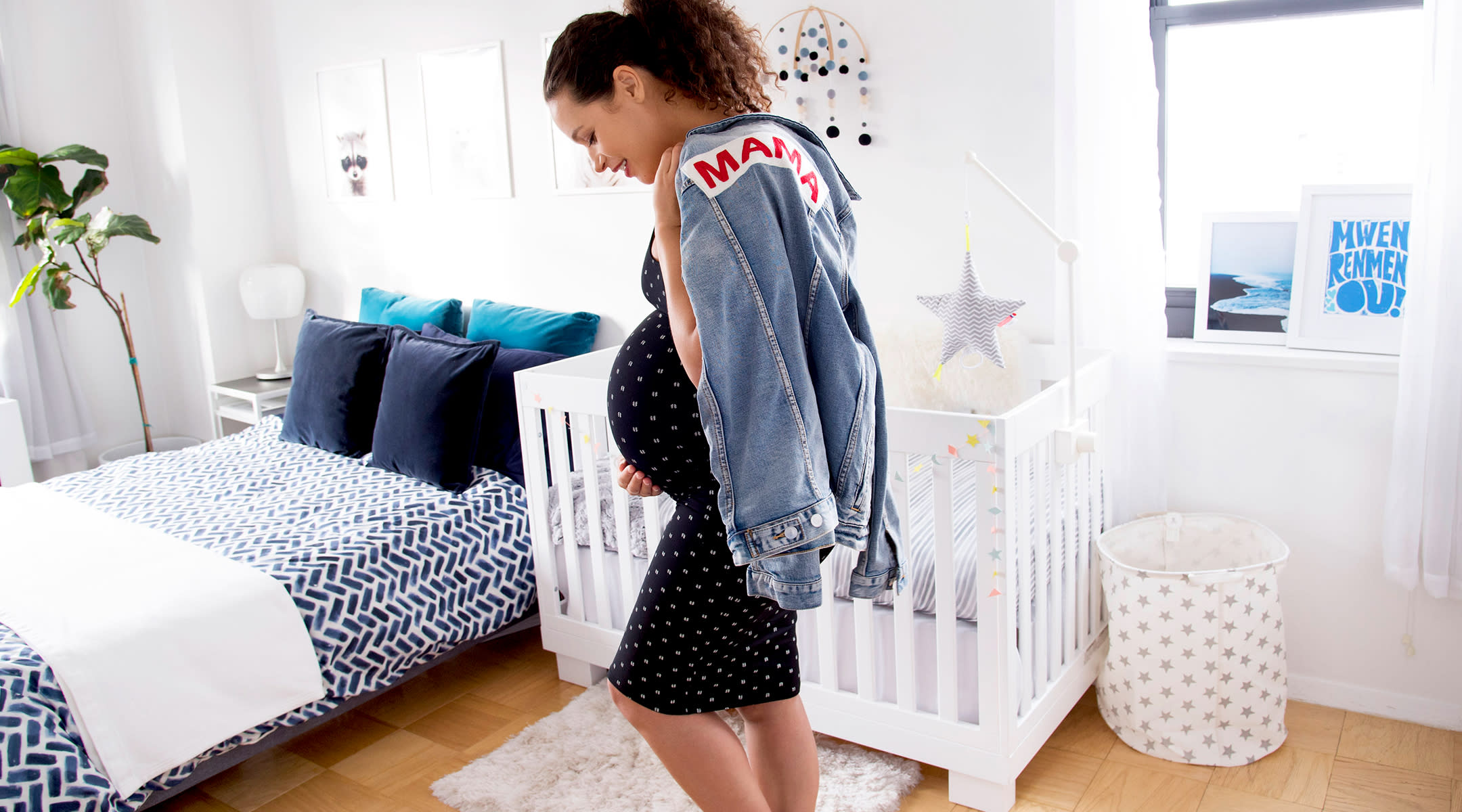 Seeing your body change is never easy, even when change is positive. Pregnancy is one of those examples. The shifts begin almost immediately: Breasts swell, blood and fluid levels rise, the uterus starts to expand and you feel bloated. You may not look pregnant at the beginning—but you certainly feel it.

I’ve been a model for 21 years, a doula for three and a prenatal yoga and fitness instructor for a year. I know quite a bit about pregnancy and birth, but the rational side of my brain has taken a back seat at times during my own pregnancy. I’ve been told that I’m too short, too curvy, too ethnic, since age 13. After spending the majority of my life in an industry that only values my physical appearance, the hardest part of pregnancy, for me, has been my perception of my body throughout all these physical changes.

I worked until 17 weeks pregnant when I felt I was showing too much and not feeling emotionally great about trying to “hide” my pregnancy. I thought that I was showing, and by the end of my first trimester, my agents and clients reaffirmed it. I received numerous comments on the amount of food I was eating during shoots (hello carbs!) and lost bookings because of my emerging bump (I now look back and realize how tiny I still was). I had been trying to suck it in, but there’s no sucking in a growing uterus and baby.

My first trimester involved more food than I’m used to eating. I ate a bagel for the first time in years. I had to eat every two hours to fend off nausea. This new food schedule forced me to acknowledge my poor food habits. While I’m a healthy eater, I don’t eat regularly or often. I’ll usually have a smoothie for breakfast and can easily go until 5:00 p.m. before eating again if I’m running to castings and appointments. Pregnancy just doesn’t allow for this. I knew that I needed an additional 300 calories each day for my baby, on top of making up my calorie deficiency from bad habits. At one point I found myself crying over the stove while making eggs for breakfast because I was feeling overwhelmed by having to think about food so much more than I ever had before. In addition to needing to eat, there is also so much pressure to get enough of the “right” foods during pregnancy. It was all just too much to think about all of the time.

Luckily, I found my outlet: Taking a break from modeling and focusing on teaching prenatal fitness was like a breath of fresh air. I was allowed to let my belly out. I publicly announced my pregnancy on social media around 20 weeks and felt such a sense of relief. There was no more hiding. But with that came more comments on my body from friends and strangers. While I’m sure many were well-intentioned, I’d suggest never telling a pregnant woman that she is huge, showing in her face/breasts/butt/thighs, or ask her how much weight she has gained. Ever. Whether you are best friends/family/a stranger on the subway.

Around 30 weeks I began to model maternity clothing. I was asked for my measurements and had a complete meltdown when I saw the numbers on the measuring tape. Rationally, I understood that it was impossible for my waist to remain 24 inches, and that my hips needed to expand to allow this little human to exit my body. But when you’ve had approximately the same measurements since age 14, it’s still not easy to process. Luckily, my midwives don’t focus on measurements. They don’t make me weigh myself but rather focus on how I feel and make sure I’m taking care of myself. This is what works best for me; I didn’t weigh myself pre-pregnancy as I realized years ago that I quickly would fall into an obsession of weighing myself every day at the gym.

I did my first nude photos ever around this time. They were beautiful, but all I could focus on was the cellulite on my thighs. I wanted to cry and never show these images to anyone rather than celebrate the changes and life that it all signified. It was such a challenge to even walk by a mirror and see fuller arms or thicker thighs that rubbed together for the first time. Let me tell you something that no one else will: Everything gets bigger. And I mean everything. Hands, feet, thighs, arms, face, armpits and even the labia get bigger. It’s just surreal.

All of these body image challenges considered, I’ve had a relatively easy pregnancy. I’ve been outspoken and honest about how I’ve been handling it because I want others to know it’s okay if they aren’t blissed out all the time. Both the emotional and physical changes are hard. Your life is changing. Your body is changing. While I’ve certainly felt betrayed by my body and pressured by expectations at times, my pregnancy experience has also been oddly empowering. I’m far more upfront about what I need and will speak up for myself more than I ever did pre-pregnancy. This little human is pushing my boundaries physically and emotionally and causing me to grow so much because of it.

Natural Ways to Take Care of Your Skin During Pregnancy