It’s not easy being separated from your newborn, but knowing they’re receiving the care they need can help. One mom shares her story and expresses her gratitude.
ByAdriana Quaranto
Creator of the 4F’s Given blog
Published October 29, 2021

Giving birth at 33.5 weeks was pretty surreal. For weeks, I’d been saying that the baby was coming early; I just felt that my body was being pushed to the max. Between my inflamed joints, tilted sacrum and pelvic symphysis dysfunction, I was in constant pain. I even had to take maternity leave early, and started getting weekly massages and chiropractic adjustments. So when I went into labor on September 17—six weeks early—I was ready to be done with pregnancy. What I wasn’t prepared for was being separated from my newborn.

Lying on the surgery table, incapable of moving, all I could do was watch as they took my little Beni away to the neonatal intensive care unit (NICU). His cry was a bit labored so they wanted to make sure they got him on oxygen immediately. I had no idea what to expect, as my first delivery was vaginal and full term; this was a new and unexpected experience. Once I was taken to my postpartum recovery room, I was given all of the information on my little Beni: He was born at 7:02 p.m., weighed 5 pounds and was in good health. He was on a CPAP machine to make sure he was getting the oxygen he needed and had an IV for fluids. I was filled with gratitude for the wonderful care he was receiving, but my heart hurt. I wanted to see him and hold him.

First thing the next morning, I called for a wheelchair to take me to the NICU. I was rolled next to the incubator Beni was sleeping in; it was so great to finally lay eyes on my baby boy. He was connected to so many machines and there were so many wires. My first question was, “Can I hold him and do skin-to-skin? The nurse said yes, so I quickly pulled open my hospital gown and put Beni on my chest for the first time. I was incredibly emotional. I still couldn’t put him to my breast because of the CPAP machine, but I held him tight and kept him close for as long as I could. As soon as I got back to my room, I let the NICU know that, while I was pumping colostrum and building my supply, I wanted them to give him donor breast milk. 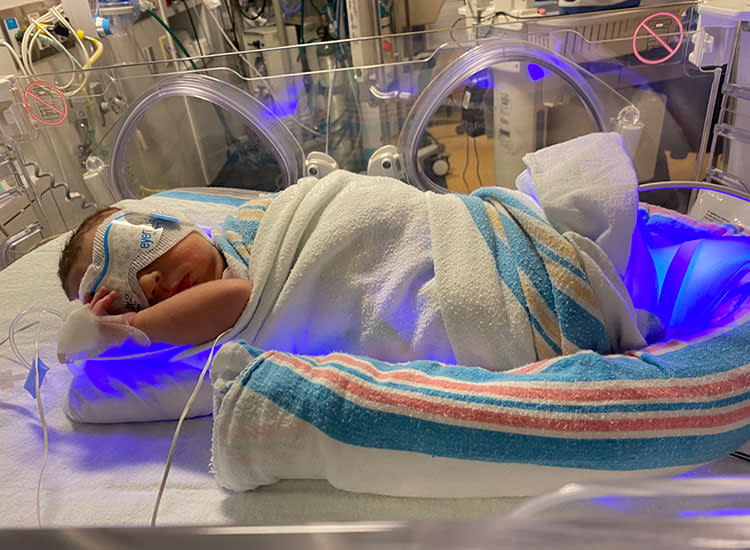 The next few days proved to be promising. Beni was progressing positively and was taken off the CPAP after two days. I was pumping more and more milk, and we were both getting stronger. After three days in the hospital, I was discharged to go home, but Beni was not. Leaving without him was the hardest thing I’ve ever had to do. It was bittersweet because I was eager to get home to see my young daughter Stella. She was having a hard time with this abrupt change and not having her mama home with her.

Beni continued to make strides toward being discharged. The nurses were happy with his progress, and they thought he’d be home in a matter of days. He was known as a “champ eater,” and soon his IV came out, which meant he was eating on his own. I spoke to the nurses daily; sometimes several times a day. They truly made the experience much more bearable.

As we were preparing to bring Beni home, we got a call from a nurse that he had what’s called a ”brady dip.” Technically, it’s called a bradycardia dip; this happens when baby’s heart rate dips too low, decreasing their supply of oxygen. Although it’s common with preemies, it wasn’t easy for us to go through. He was put on a ”brady watch,” and we were told that for every dip, he’d have to stay in the NICU for another five days.

At the same time, the nurse practitioner told me they had to take him off donor milk, and that I needed to provide him with all his milk or they would supplement with formula. I had been pumping every two to three hours and bringing my milk in as often as I could, but for some reason it felt insufficient. They suggested giving him booster feeds of formula, explaining it would help foster brain development. But I didn’t see the point, since breast milk is proven to boost brain development too, and I was committed to staying the course; he was gaining weight and had regular wet and dirty diapers. I had to carefully navigate that situation to make sure they were only feeding him my milk. Thankfully, the staff accommodated my wishes and didn’t push back. We were a team.

Since all of this was so unexpected, my partner, Eric, wasn’t able to take time off of work, so I was home with our toddler trying to recover. Because of the limited help, I wasn’t able to go see Beni, which was gut-wrenching; I knew he needed me as much as I needed him. Thankfully, we have some amazing friends and neighbors who dropped off loads of food, gifts and flowers to help lighten our load and brighten our days. 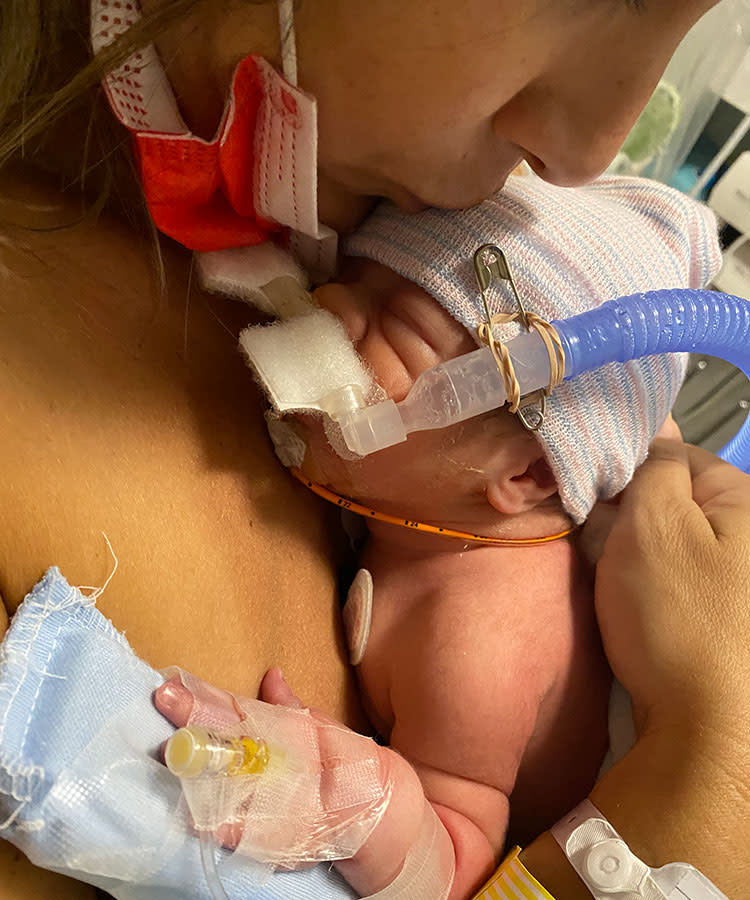 I spent every day that Eric wasn’t working at the hospital. I pumped around the clock to make sure he never ran out of milk, and I spent as much time with him as I could. I was tired and sore and didn’t carve out much time to recover, but I felt up for it. These are the sacrifices we make for our kids.

Beni made it through the five days of ”brady watch;” the last test was the car seat test (where they make sure the baby doesn’t have breathing issues while in their car seat), and he passed with flying colors. My Beni was discharged the following day. In total, Beni was in the NICU for 16 long days.

Being separated from my newborn for two weeks was not something I had imagined. It’s not how any parent pictures the postpartum experience. But the nurses and doctors who spend all day with these kiddos are truly a godsend. It hurts to leave your little one, but it helps to know that these NICU professionals care so deeply for the babies they’re charged with and their families. So if you are going through the same thing, know that no matter how frustrated or sad or happy you are, they’ll be there for you and baby with smiles on their faces. Their warm demeanor will help you navigate the NICU journey—whatever it looks like for you. I’m incredibly grateful for their patience, kindness and care.

About the author: Adriana is a CEO turned full-time snack holder. She is a mama of two (one boy and one girl), a breastfeeding advocate and marketing professional. She’s also now a lifestyle blogger documenting her journey into motherhood on her blog 4F’s Given, where she talks about her four favorite F words: family, fashion, food and fitness. Follow her journey on Instagram for real mom life sprinkled with humor and parenting tips.