“That ecstatic, full-hearted feeling of knowing we were welcoming a precious baby girl was being invaded by terrifying imagery of the world we live in.”

ByAdriana Quaranto
Creator of the 4F’s Given blog
Updated June 3, 2019 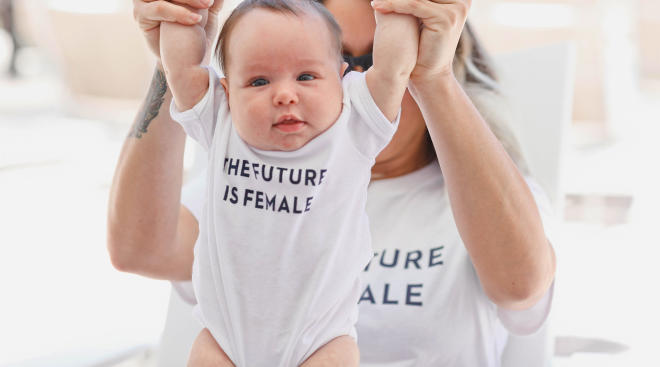 It was early Tuesday morning when my fiance Eric and I walked into the OB’s office for the routine bi-monthly pregnancy checkup and ultrasound. We didn’t know the gender of our little peanut yet and we weren’t sure we wanted to find out that day. There are only a few surprises left in life, as they say. But being the Type A obsessive planner that I am, I wondered if leaving that major detail as a surprise would lead to my having a full-on meltdown. I didn’t want to find out. And after months of trying on baby names and finally landing on two that we both loved—one for a boy and one for a girl—we were excited to attach a name to the baby we’d both spent countless hours trying to envision in our minds.

After a few minutes (that seemed like a lifetime), the nurse came in with her manila folder and asked if we wanted to know the gender of our baby. Eric and I looked at each other and simultaneously said, “yes!” The rush of excitement and nerves coursed through me. I could almost hear my heart beating. “You’re having a girl,” she said—and I burst into tears, overwhelmed with emotion. I immediately felt guilty. Wasn’t I supposed to jump for joy? I wasn’t sure what was wrong with me. I was flooded with emotions that I’ve never quite explained, until now.

I never really cared one way or another about the sex of our baby, but when we were told we were having a baby girl, my brain began to stitch together the various realities that Eric and I would be facing as parents—not only the day-to-day routines but also the challenges our little girl will face on her own. That ecstatic, full-hearted feeling of knowing we were welcoming a precious baby girl who we’d raise to be a strong, kind and independent woman was being invaded by terrifying imagery of the world we live in.

This world is messed up, systemically and politically, and there’s no sign of it getting better. With climate change in full swing, what will the world look like in 20, 30, 40 years? That idea alone is terrifying enough to incite celibacy, which could explain the historic decline in reproduction. Throw into the mix the realities of being a female in this world, and the worry is amplified. When my daughter comes of age, will women still be fighting for gender equality? Will the fate of her future still be determined by privileged white men? With my face in my hands, I found myself feeling overwhelmed by issues that haven’t improved much in my lifetime. My wish for my daughter to live carefreely and equally was staggering. How do we, as her parents, prepare her?

When we left the office, I looked at Eric and his face had changed. I asked him how he was feeling, and he said, “excited and scared.” When I asked him why, he said, “because the country is polarized, and the world is unjust. I just want her to be safe and I want to protect her.” At that moment, I knew he’d be the very best father to our little girl, and my heart exploded with love. I felt some relief in the fact that I wasn’t alone.

Fast forward to February 28, 2019, when Stella was born. The country is more polarized than ever before. Women are oppressed in many areas of the world with fear of being raped or beaten at any given time. Women are being paid $.80 for every $1 that men earn. More and more men with power, money and fame are being publicly accused of violating women. Racism is rampant across the country.

So what do we do with a little girl growing up in this mess? Can she make a difference? Can we teach her to be compassionate and kickass? The answer: Yes! But how? My parents raised two strong, compassionate women. Reflecting on their approach to parenting and how I might do the same, here’s my seven-part plan:

• 1. Foster independence and confidence. One way my parents did that was to let me pick out my own clothes. It made for some great photo perusing decades later.

• 2. Offer advice and guidance rather than place pressure, guilt and obligation. Let her make her own choices and learn that each choice comes with responsibility.

• 3. Praise her with confirmation and clarity. Give her specific reasons why she’s being praised to build her self-confidence.

• 4. Encourage competence & education. Teach her many things about the world. Talk to her about current events as well as history.

• 5. Promote a healthy body image. Talk to her about healthy eating and nutrition instead of contrasting fat and skinny.

• 6. Prepare her for sexism. Teach her that women are powerful and equal.

Make no mistake about it, raising a child—boy or girl—is no walk in the park. But raising a girl can be daunting when we live in a world with so much gender disproportion. Shout out to all those parents out there doing their best to raise the next generation of change-makers, policy-shakers and rule-breakers! The future relies on us to impart the proper tools and strong morals to our babies if we want to see real change. “Be the change we want to see” extends to how we raise our children, because they’re the ones who will shatter those glass ceilings that have been oppressing us for far too long.

Boston-born, Florida-raised and New York City-seasoned, Adriana Quaranto is the owner of an event production, public relations, social media and influencer marketing agency, and a New York Fashion Week show producer. She’s also now a lifestyle blogger documenting her journey into motherhood on her blog 4F’s Given, where she talks about her four favorite F words: family, fashion, food and fitness. She is also a contributing writer for the Miami Moms blog. Follow her journey on Instagram.