It starts with giving kids the opportunity to fail. 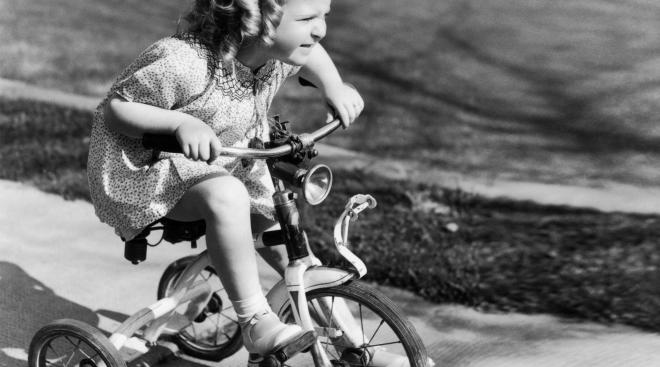 You’ve probably heard of grit, one of pop psychology’s most hyped notions when it comes to guiding children to success today. Tiger mom, helicopter parent, free-range; no matter what your parenting style, we all want success and happiness for our kids. Grit, which focuses on a child’s tendency to keep pursuing something even when faced with setbacks or failure, gives us another option to push them down the path to greatness when talent alone isn’t quite enough.

Of course, there are countless ways to define success. But recent research shows that teaching kids skills that help them rethink tough life obstacles as exciting challenges—a key tenet of grit—can, in the very least, boost their academic performance down the line.

Here’s the kicker: You can start developing grit in kids as young as age 1.

“[Grit is] a mindset that you want to start building in your children from a very early age,” says Chantell Prestcott-Hollander, a licensed school counselor at Stone Ridge School of the Sacred Heart in Bethesda, MD. “It’s giving kids an opportunity at young ages to fail—with toddlers, it’s letting them try to get a block into the right hole; letting them try to pull their sock on. It’s letting them have sufficient time to solve these problems on their own, which builds resilience.”

Grit challenges the idea that intelligence, talent and luck are the top predictors of success. Coined roughly a decade ago by doctoral student Angela Duckworth—now a psychology professor at the University of Pennsylvania—grit aims to level the playing field in achieving greatness. It is a character trait that can be developed; a gritty person is one who doesn’t see challenges as shortcomings of ability but as lessons to learn from and as tough tasks necessary to get to the next stage.

“You can lead a happy life without being gritty, but if you want to be as good as one of your heroes in the NBA, well, no one gets that good without passion and perseverance,” says Cameron French, communications manager of Character Lab, a nonprofit organization founded by Duckworth that helps schools instill character traits in students. “Grit helps pull back that curtain of excellence and shows people how masters become good at what they do.”

While grit centers around fostering perseverance over years in the conquest of a single passion, it builds upon a the longer-standing concept of growth mindset, which is the belief that ability is malleable and can be increased with effort and learning.

“Believing that your qualities are carved in stone—the fixed mindset—creates an urgency to prove yourself over and over,” writes Stanford University psychology professor Carol Dweck in her book, Mindset: The New Psychology of Success. “The growth mindset is based on the belief that your basic qualities are things you can cultivate through your efforts, your strategies, and help from others.”

Why Is Developing Grit in Kids Important?

There’s a growing body of research that suggests that non-cognitive factors—traits like grit, perseverance and mindfulness—can have just as strong as an influence on academic and professional performance as intellect. While much of the instruction specific to grit revolves around kids in middle school and up, new research shows a direct correlation between the praise that toddlers and preschoolers receive from caregivers and their academic performance down the line.

Elizabeth Gunderson, an assistant professor of psychology at Temple University, studied the way that a group of parents praised their 1 to 3 year olds at home. She checked back in with the kids at ages 7 and 8 as well as one to two years after that. Her findings: Children who heard encouragement like “you worked so hard” and “I like the way you used all those colors”— vs. “you’re so smart” and “good girl!”— were more likely to believe that qualities such as smartness are malleable. This growth mindset, a foundational layer to grit, helped predict these kids’ success in both math and reading comprehension in second and fourth grade.

“In contrast, viewing intelligence as unchangeable (a fixed mindset) leads children to be concerned about their level of fixed ability (e.g., how smart am I?) and to avoid challenges that might reveal that they have low ability,” Gunderson’s report says. “Such children may do well in subjects that come easily, but struggle to remain motivated when facing challenging material.”

Laying the groundwork for grit in young kids can also help with what psychologists say is lacking today: The ability to cope with everyday difficulties.

“Kids aren’t learning how to solve their own problems,” says Amanda Stemen, a licensed clinical social worker in Los Angeles. “I see so many kids who can’t handle basic problems such as not getting an A in school; things where I don’t think they should need to have therapy to deal with.”

How to Develop Grit in Kids

What’s the best way to kick off raising a gritty child? Above all, remember who you’re dealing with. “Your approach needs to be developmentally modified,” says Nina Kaiser, a child psychologist and founder of Practice San Francisco, which offers programs for kids, teens and parents on perseverance. “What you’re doing with toddlers and preschoolers is less of the direct skill and more setting the stage for those [strategies] down the road.”

Forget holding your 1, 2 or 3-year old to their commitments to keep them from becoming quitters. “This can lead to anxiety in parents and confusion in their offspring about who they are growing up for,” says Kyle Pruett, professor of child psychiatry at Yale University and social-emotional development advisor to The Goddard School. Instead, start by being mindful of the way you talk to them.

•Praise their process, not their talent. Children who get praised for their efforts—“You worked really hard at that!”—are more likely to believe that their accomplishments are due to deliberate practice, which can eventually lead them to seek challenges that will increase their abilities. This, Gunderson says, has the potential to foster academic success.

•Don’t overdo praise. Kids know when you’re laying it on thick. Praising them too much, like for everyday tasks that don’t require a lot of effort, might lead to distrust. It also devalues what you’re trying to do. “There’s danger in giving the message that praise for effort is like a consolation prize,” Gunderson says. “When the child succeeds and does something that is praiseworthy, reinforce the message that what got them there was their hard work.”

•Don’t label your child. Calling your kid “smart” or “nice,”—or worse, something negative like “slow”—evokes a fixed mindset, which might lead them to hesitate and back off when confronted with a challenge because they fear failure. “When you’re given a positive label, you’re afraid of losing it, and when you’re hit with a negative label, you’re afraid of deserving it,” writes Dweck in Mindset.

•Model grit. As your child’s parent, you are their best real-world example of any behavior you want to convey. Allowing them to see you put in the time to accomplish tasks—finish a book, a chore or project—serves as the best example of perseverance.

•Let them struggle (within reason). It’s so much easier to do things for our preschoolers. But allowing them the time to occasionally pull on their own shoes or solve a puzzle alone does two things, Prestcott-Hollander says: it enables both of you to focus on the child’s efforts, giving you the opportunity to praise them, and it allows them to get used to the discomfort of dealing with mistakes, which is crucial for developing resilience.

•Treat your child’s setbacks with dignity. Mistakes, writes Dweck, should be used as a platform for learning. Talk about what they learned and the next steps. Reacting with too much concern or emotion—or even too little, if you’re trying to gloss over it—can initiate a fixed mindset.

•Minimize distractions during tasks. When working with your child on a project, game or job that requires lots of focus, limit background noise and disruptions. Turn off TV, find a quiet spot away from siblings or pets. This helps your child with effortful control, or the ability to voluntarily manage her attention as needed to get something done, even if she’s not enthusiastic about the task.

•Enroll them in sports. There aren’t a lot of organized sports for 1- and 2-year-olds, but any type of exercise may help kids with executive function, or regulating their thoughts, actions and emotions. Sports offer a “really concrete context in which to practice some of these skills,” Kaiser says. “Most kids aren’t super skillful the first time they touch a basketball or lay hands on a soccer ball. Making mistakes and learning over the course of time—you miss a shot, you lose a game, someone else loses the game—are opportunities to bounce back and put a skill into place in an effective manner.”

•Introduce them to martial arts. Most martial arts practices like tai chi use elements of mindfulness, or being aware of exactly what’s happening at a given moment. This is a key principle of perseverance. “It’s accepting where you are—especially if you don’t want to be there—in order to move forward,” Stemen says. “As soon as you fully accept that you don’t want to stay there, it opens up other ways to seeing things.”

•Don’t force them into things. Grit involves doing something you’re passionate about. If your toddler resists an activity you sign them up for, “the risk of continuing to push at such moments is that your child may get the sense that you don’t understand them and push-back enters their repertoire of behavior, making control of what they like or don’t like the issue—not the possibility of enjoying a new activity with your support,” Pruett says.

Most kids will need guidance when it comes to staying the course en route to happiness. Grit can really help. “It’s a trait will serve kids well no matter what their goals or achievements are,” Kaiser says. “You’re teaching skills around mindsets that will help them cope better with stress and be more aware of their own interests and enthusiasm—and be better able to find their own happiness.”