Sudden Infant Death Syndrome: What It Is and How to Prevent It

Learn what the SIDS risk factors are and how you can keep baby safe while sleeping.
save article
BySona Charaipotra
Published August 18, 2017 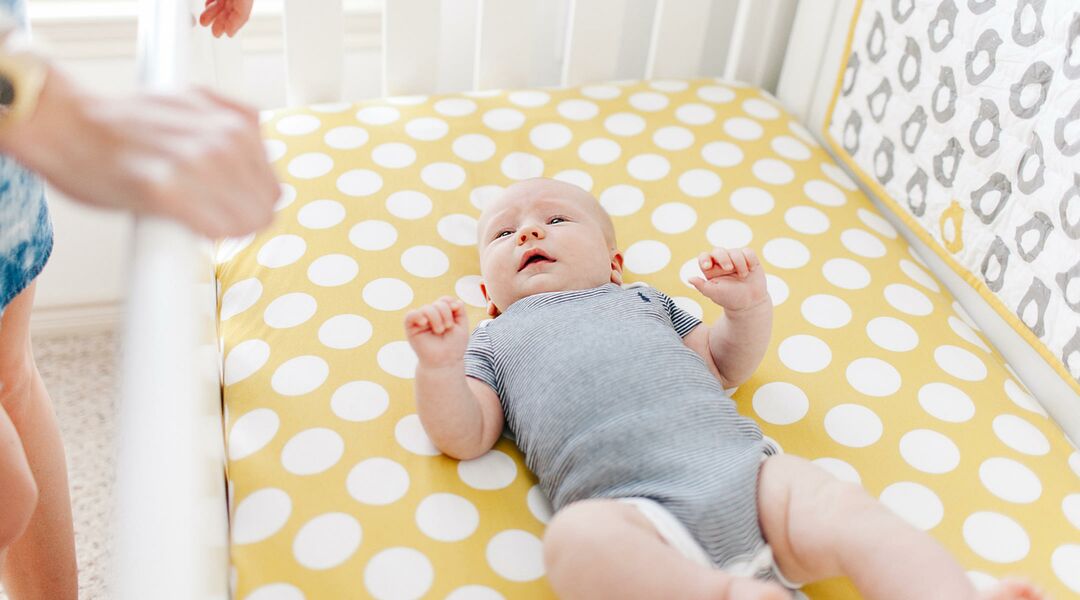 It’s every new parent’s biggest fear: One moment, baby is sound asleep and the next, she’s not breathing. By definition, Sudden Infant Death Syndrome (SIDS) has no known cause. It’s extremely rare, but a small percentage of babies do die in their sleep within the first year of life, without warning or explanation. The best way to decrease baby’s SIDS risk is to always keep her in a safe environment, especially while sleeping. Here’s what you need to know about SIDS risk factors and how to prevent SIDS as best you can.

In this article:
What is SIDS?
How common is SIDS?
When does SIDS occur?
Causes of SIDS
SIDS prevention

SIDS is defined as the “sudden and unexpected death of a baby (under a year old) that remains unexplained after a thorough death scene investigation, autopsy and review of clinical history,” says Debra Weese-Mayer, MD, professor of pediatric autonomic medicine at Northwestern University’s Feinberg School of Medicine and chief of the Center for Autonomic Medicine in Pediatrics at the Lurie Children’s Hospital of Chicago and Stanley Manne Children’s Institute. Since it strikes when baby is sleeping, SIDS is also sometimes called “crib death”—which is something of a misnomer, since cribs don’t contribute to SIDS risk. (They’re in fact the safest place to put baby to sleep.)

SIDS is actually part of the umbrella term Sudden Unexpected Infant Death (SUID), which includes babies who die unexpectedly in the first year of life due to a number of reasons, including:

SUID can occur if baby is placed to sleep on his stomach, in an adult bed or on a couch, in a bed with other children or adults or in a sleep space that includes blankets, soft bedding, toys or crib bumpers, says Deborah Campbell, MD, FAAP, chief of neonatology at the Children’s Hospital at Montefiore in New York City. But while these deaths are often referred to as “sleep-related,” they’re not categorized as SIDS, Campbell says, since there’s a clear cause of death.

How common is SIDS?

SIDS is the leading cause of death among infants 1 to 12 months old, and about 1,600 babies died from SIDS in the US in 2015, according to the US Centers for Disease Control and Prevention (CDC).

But those SIDS statistics used to be much higher: In 1993, 4,700 babies died from SIDS, according to the American Academy of Pediatrics (AAP). Since then, the number of annual SIDS deaths has been on the decline thanks to an increased focus on awareness and education. The “Back to Sleep” campaign, for example, was launched by the US National Institute of Child Health and Human Development and other agencies in 1994 to promote putting babies to sleep on their backs on a firm surface and following other safe-sleep practices.

When Does SIDS Occur?

“By definition, SIDS includes infants under one year of age,” Weese-Mayer says. “But 95 percent of SIDS deaths occur by 6 months of age. The peak SIDS age range is between 2 and 4 months of age.”

Age is the primary factor in assessing SIDS risk in babies. While other considerations may come into play—like location, environment, race and ethnicity—there’s no conclusive research that defines how these other factors play into a child’s SIDS risk. It used to be believed that SIDS was more common during the colder months of the year, Campbell says, but we now know that time of year has no bearing on the likelihood of SIDS.

What scares parents the most about SIDS is that there’s no known cause. Not surprisingly, the lack of a clear answer has sparked frequently asked questions about the potential causes of SIDS.

Many people ask, “Is SIDS genetic?” The answer is no—but fatal genetic mutations are sometimes mistaken for SIDS until they are discovered during an infant autopsy. “Some infants diagnosed as dying from SIDS have rare gene mutations that affect the function of the heart’s conduction system or change how the body’s metabolism works,” Campbell says. “These mutations can lead to a deadly heart arrhythmia or, in the case of a metabolic disorder, cause a buildup of chemicals that cause baby’s breathing and heart to fail. These babies die from a sudden unexpected death, but not from SIDS.”

Others wonder if there’s a link between SIDS and vaccines, but there’s no conclusive research that shows vaccines are causes of SIDS. “Vaccines, immunizations and infant shots do not cause SIDS,” Campbell says. So what can increase a child’s risk for SIDS? Read on.

While we don’t know what causes SIDS, scientists have pinpointed what has become known as the “triple risk model,” Campbell says, “a merging of three conditions that may lead to the death of an infant due to SIDS.” These three conditions are:

• A critical development period. SIDS risk is highest during the first six months of an infant’s life.

• A vulnerable infant. This refers to a baby who has brainstem irregularities in the region of the brain that controls breathing, heartbeat, temperature and blood pressure.

• Internal or environmental risks factors. This can be anything from an infection to exposure to tummy sleeping, soft bedding or exposure to tobacco smoke. In fact, researchers have found smoking during pregnancy nearly doubles the chance of SIDS for babies. Exposure to smoke after birth is also dangerous: It makes the part of baby’s brain that controls breathing less sensitive to low oxygen levels or a buildup of carbon dioxide, leading to potential catastrophe if baby is face down, wedged in a corner or has a blanket covering her face, Campbell says.

Together, these factors may combine to create an environment in which a predisposed baby experiences a shock to the system—one that, due to an already compromised system, the child can’t survive. “Most scientists believe babies who die of SIDS are born with one or more conditions that cause unexpected responses during sleep,” Campbell says.

Baby’s level of SIDS risk can also be increased by the following factors:

• Maternal drug use. A mom using drugs during her pregnancy increases SIDS risk dramatically once baby is born.

There’s no way around it: SIDS is scary. So what can parents do to decrease baby’s SIDS risk? While there’s no guarunteed way of preventing SIDS, doctors recommend following the AAP’s sleep guidelines to keep baby comfortable, cozy and as safe as possible. Here’s what you need to know:

• Put baby to sleep in your room but in a different bed. “It’s recommended that infants sleep in the parents’ room, close to the parents’ bed, but on a separate surface designed for infants, ideally for the first year of life but at least for the first six months,” Campbell says. Evidence suggests this arrangement decreases SIDS risk by as much as 50 percent, since a parent can keep a closer eye on baby.

• Lay baby on her back to sleep. Sleeping on her tummy, side or any other non-back position is “an enormous risk factor for SIDS,” Weese-Mayer says.

• Place baby to sleep in a crib. SIDS used to be called crib death, so some parents mistakenly believe putting baby to sleep on a bed, couch or bassinet will prevent SIDS. But that’s a myth—a crib is the safest place for baby. Even if baby falls asleep in the car seat or stroller, it’s best to transfer her to a crib if she’ll be asleep for a while. Because babies have poor head control, sleeping while sitting up might block her airways and deprive her lungs of oxygen.

• Get a good crib and firm mattress. Make sure your crib complies with current safety standards and has a firm mattress and well-fitting sheet.

• Avoid fluffy bedding and bumpers. You may think bumper pads are cute, but the AAP advises against using them. Contrary to earlier notion that bumpers keep baby safe, studies have found that they can suffocate, entrap and even strangle babies during sleep.

• Take everything out of the crib. Don’t worry about using accessories to make baby comfy—he’s just fine flat on his back. Never cover baby’s head with a blanket, avoid loose-fitting PJ’s and keep cuddly toys, blankets, pillows and stuffed animals out of the crib. The only thing that’s okay is a light swaddle blanket for babies 0 to 2 months.

• Use a pacifier. Using a pacifier engages baby’s mind and body, even during sleep. “Consider offering a pacifier at naptime and bedtime,” Campbell says. Before you do, though, make sure that breastfeeding is well established, which usually takes three to four weeks. And no matter how old baby is, “make sure there is no string or fastener on the pacifier that can wrap around baby’s neck,” she says.

• Don’t smoke. Be sure to place the crib somewhere smoke-free. In fact, keeping baby away from smoke altogether is the best idea—even when he’s still in the womb.

When it comes to the (ever-controversial) topic of co-sleeping, the latest AAP recommendations advise putting baby to sleep in the same room as you but in different beds. But it’s important to be clear about what co-sleeping means. “Co-sleeping and bed-sharing are two terms that are often used interchangeably but have different meanings,” Campbell says. Here’s what each term really means:

• Co-sleeping. This is a sleep arrangement in which the parent (or another person) and baby sleep near each other, either on the same surface or different surfaces, to be able to see, hear or touch each other, Campbell says. Co-sleeping can include bed-sharing, but it can also describe room-sharing with baby sleeping in a bassinet or crib adjacent to the mom’s bed.

• Bed-sharing. This is a category of co-sleeping in which baby sleeps on the same surface as another person, whether it’s on a bed, couch or chair. Experts agree: bed-sharing increases the risk of suffocation and other sleep-related causes of infant death. One study found that 13 percent of surveyed SIDS victims died while bed-sharing.

There’s no evidence that swaddling increases—or decreases—SIDS risk, but AAP sleep guidelines say it’s fine to swaddle baby, as long as it’s done properly. “Swaddling (aka wrapping baby snuggly in a cloth or light blanket) can help calm or soothe a newborn, but shouldn’t be done after the infant is 2 months old,” Campbell says. “It’s important to swaddle baby properly to avoid putting undue stress on the hips and the prevent baby from getting tangled up in the blanket.” Once baby is 2 months or older, it’s best to avoid swaddling because extra blankets in the bed could increase SIDS risk.

Reducing baby’s SIDS risk comes down to attention to details. Even though SIDS is rare, when it’s your baby, you’ll want to do everything you can to prevent it from happening.

The Best Bug Spray for Babies and Kids
Article saved.Go to My Saved Articles
Article removed.