How My Surrogate Has Helped Me Through My Twins' First Year

It takes a village. 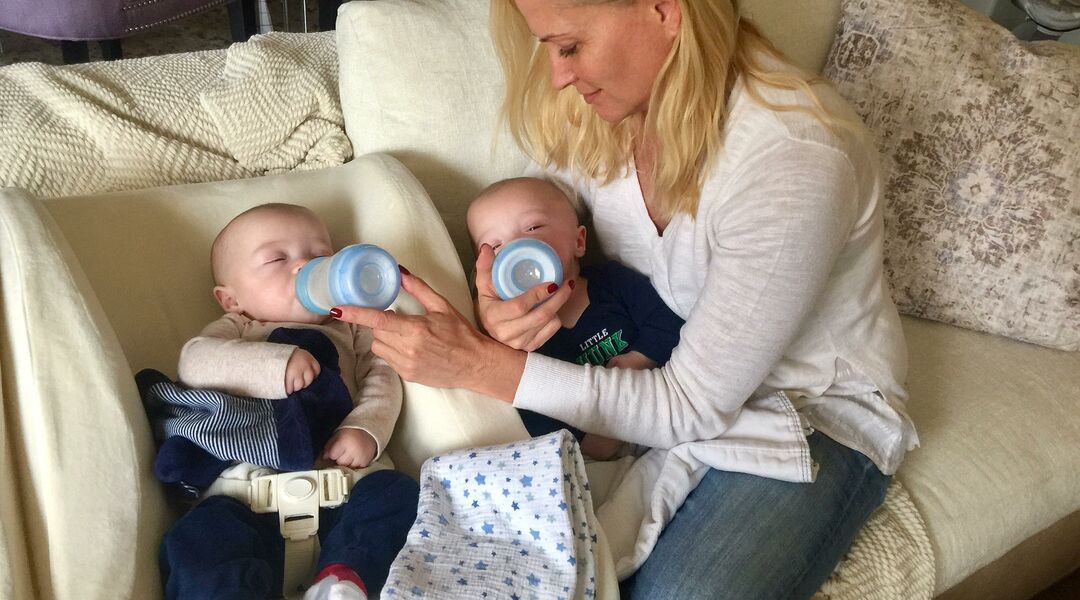 In June of 2016, Jennifer Biffer wrote about her 46-year journey to motherhood via surrogacy. At the time her surrogate was 24 weeks pregnant with her identical twin boys. The twins turned one on August 16, 2017.

It has been a roller coaster of a year, to say the least. With the help of our surrogate, Diane, my twin boys arrived on August 16 of last year—eight weeks early and four weeks ahead of their scheduled c-section, initially planned for 36 weeks.

I was blessed to be in the operating room holding Diane’s hand as they first delivered Wyatt Gabriel and then one minute later, Aiden Royce. After months of waiting to see them in person it was surreal, awe-inspiring and terrifying all at once. Up until now it was Diane’s job to keep them healthy, and now it was going to be mine. As I followed the neonatal team and the babies to the NICU, Diane’s husband entered the operating room and took over the hand-holding duties.

Before I knew it, both babies were intubated, put on ventilators and had feeding tubes inserted into their umbilical cords. It would be three days before I could hold Aiden, 10 days until I could hold Wyatt and another three weeks until I could hold them together. Ultimately, Aiden stayed in the NICU for 38 days and Wyatt for 68 days. Neither seemed to be able to wean themselves off of oxygen support. Both of them were constantly sticking their tongues out. MRIs, CAT scans, x-rays, EKGs, EEGs, barium swallow studies, chromosomal studies, blood and urine tests—you name it, they had it done to them. In the end, the diagnosis for their oxygen needs was chronic lung disease due to prematurity. The tongue issue, I am still told, may one day be named after us. The Biffer Syndrome. Great—just what every mother wants to hear. 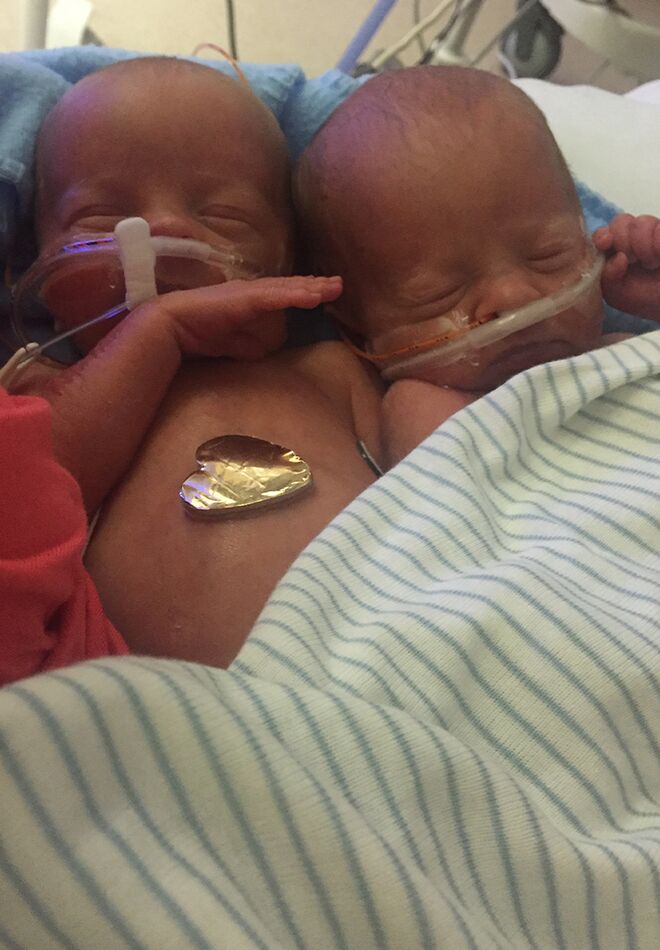 One piece of good news? After initially receiving Diane’s colostrum, both boys were tube-fed my breast milk. I had taken hormones throughout Diane’s pregnancy to convince my body it was pregnant. Once she was in the hospital, I induced lactation by pumping. Eventually I got up to 12 ounces a day, which was incredible considering I had been in menopause for 23 years!

The team of specialists my boys have now is extensive. Both have a cardiologist, neurologist, gastroenterologist, developmental pediatrician, physical therapist, occupational therapist, chiropractor and feeding/speech therapist. Additionally, Wyatt has a pulmonologist. He’s still oxygen dependent at night, and there is no telling when or if he will outgrow this. Aiden has an 8 millimeter hole in his heart, an Atrial Septal Defect, and will need open heart surgery in a few years. Even with all of that, both boys just celebrated their first birthday, love their swimming lessons, are almost walking—lord help me—and each have four teeth. They sleep through the night and wake up with a smile, which is all a mother can ask for. 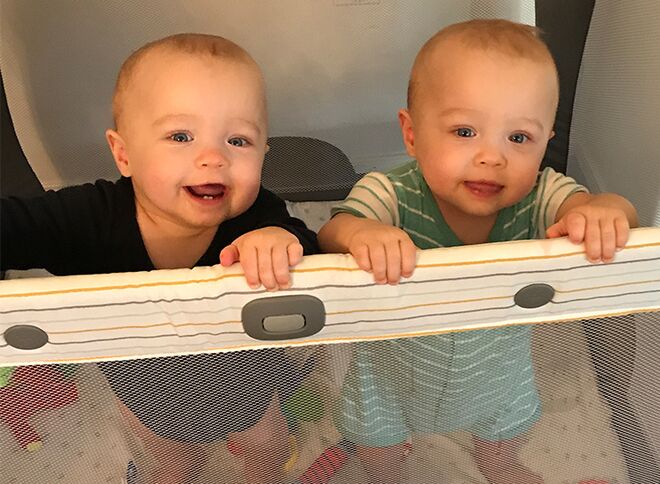 I am so blessed to have been on this journey with Diane and her family. Whenever I am in California with the boys we make time for a visit. I even text or call her for parenting advice—most recently on what to do when the babies try to crawl away from me in the middle of a diaper change.

Strangers are often amazed at the bond I have with Diane, and ask all sorts of odd questions, like, “What if she wants them back?” or “Do you have to send her pictures?” or “Do they look like her?” I just smile and say, “I’d be happy to send them to her when they are 2 for a year.” or ”We are friends and talk and text photos all the time.” or ”No—don’t you think they look like me?”

I look forward to many years of making memories and I can’t wait for the boys to be old enough to understand our connection to Diane and how indebted we are to her for making our family a reality. It’s also amazing to see the natural connection my boys feel toward her. They are both at the stage where they only want mommy, but when they see her they must recognize a smell or a pheromone because they cuddle right into her arms. 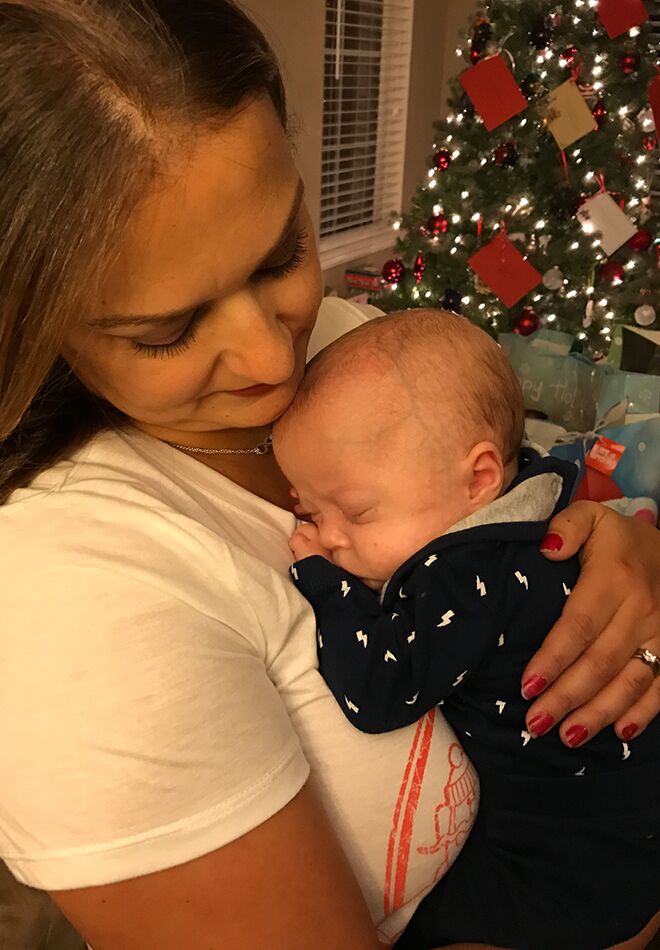 I consider myself and my boys blessed beyond words to be where we are today—even with all their health issues, even as an exhausted single mom of twins, even at 3:00 a.m. when they are both teething and want mommy to hold them. That time late at night when I rock them back to sleep? It’s become my favorite time of the day.