Eager for baby to say his or her first words? Find out what age babies start talking and how you can encourage things along.
Save article
ByHolly C. Corbett
UpdatedMay 2017 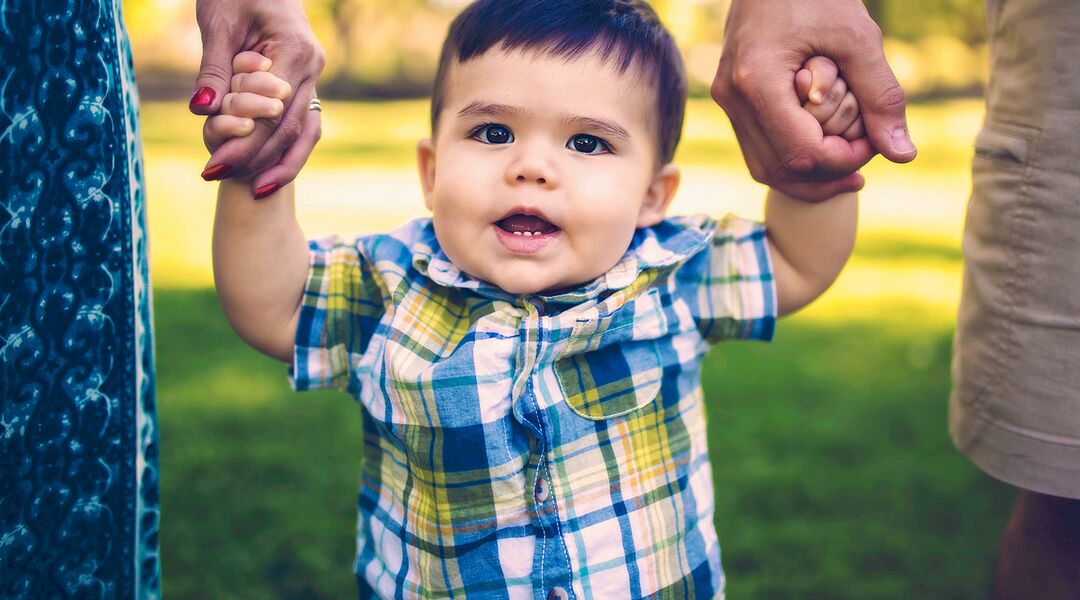 Further proof that babies are pretty incredible: They start learning language even before birth! That’s because baby could hear you speaking while in the womb, and got familiar with the rhythm and sounds of the language you spoke. In fact, studies show that babies whose moms read specific books to them while pregnant go on to prefer hearing those books once they’re born, as measured by an increase in their sucking motion, according to Marianella Casasola, PhD, who researches babies in her Infant Studies Laboratory at Cornell University.

When do babies start talking?
How to teach baby to talk
What to do if baby isn’t talking

When do babies start talking?

Apart from babbling around 6 months of age, when babies start to play with language sounds (think: “ma-ma” and “da-da”), babies won’t say their official first words for a year or so, though they have their own ways of communicating with you from birth—by crying, of course, and also by gurgling and sighing. Very quickly, you’ll learn to distinguish between baby’s various cries: her hungry cry, tired cry or bored cry. After about 1 month, baby will also begin cooing as a way to interact with you. At about 2 months, baby’s reflex smile disappears, and she’ll soon begin to smile on purpose, letting you know when she’s happy and content.

So at what age do babies talk? Well, there isn’t an exact answer. “There can be huge differences in how language progresses from one child to another,” Casasola says. Some research shows that babies as young as 4-and-a-half months can learn to distinguish the sound patterns of their own name from those of similar-sounding names. Here’s a general timeline for when babies say their first word, when babies start talking in full sentences and when babies talk clearly:

By 6 months…
Most babies are babbling regularly by 6 months, making short strings of consonant-vowel sounds such as ba-ba, ma-ma and da-da. “It’s all practice because those babbles form the basis of his first words,” Casasola says. “Babies exposed to two languages will even babble in ways that are consistent with both languages.”

At this stage baby is rapidly acquiring receptive language, meaning language that he can understand, even though he can’t yet speak it. Experimental studies show that babies can associate “mama” with you, his caregiver, as early as 6 months.

By 9 months…
By about this age, babies can begin to string sounds together to form multiple syllables, such as “ba-da-ma.” Babies can understand a lot more language than they can produce at this stage. Largely because infants don’t have the motor skills to form words with their mouths yet, Casasola explains, and because it takes more cognitive skill to be able to pull a specific word from their memory than it does to just understand it.

By 12 months and beyond…
Get ready for your heart to melt to the sounds of “mama” and “dada.” Babies say their first word around 12 months, and will talk more clearly at about 18 months. Your budding linguist may speak in full sentences by 24 months, though two-word utterances such as “my toy” are more common.

How to teach baby to talk

“Babies are hardwired to learn language” in order to get what they need and connect with you, Casasola says. “The key is to interact and have fun, because every interaction is an opportunity to teach them language.” Try these tips to get the conversation started and help teach baby to talk.

• Talk, talk and talk some more. “Studies show that how much you talk to your child is directly related to the number of words they learn, so simply chatting with her does wonders,” Casasola says. Naming things helps baby connect a word to an object, especially if she’s the one to show interest in it. So if baby points to a ball, for example, say its name out loud. Visual cues help too, so point to the ball or hold it up for baby to see as you say its name.

• Use names instead of pronouns. To help baby start talking, use a specific name when referring to a person, such as “Daddy,” instead of saying “he.” The more a baby hears a concrete name, the easier it will be for him to associate that name with a face.

• Enunciate your words. Baby doesn’t automatically know how to make a “gra” sound using the back of her mouth and her tongue. These speech skills must be learned. You can teach baby to talk by speaking slowly and articulating the various sounds that make up specific words, such as “Ggrraanndd-mmaaa” for “Grandma.”

• Sing songs and read rhymes. There’s a reason that reading books and singing songs to babies is an age-old practice. “Music and language have always been very interconnected,” says Susan Darrow, a child development expert and CEO of Music Together. “Mothers instinctively know to speak to babies in higher, sing-songy voices, and research confirms that this higher-pitched, rhythmic, slower speech facilitates language comprehension in infants.” Just listening to music isn’t as effective as making your own though, so go ahead and sing your heart out. And no worries if you don’t have a voice like Adele—baby will be happy to hear you sing no matter how it sounds because it’s coming from you.

• Repeat words. Baby’s babbling may signal that he is focused and ready to learn, so offer specific words in response to his babbles and repeat them a few times. For example, if baby says “baba” while pointing to a banana, touch the banana and say the word a few times to help it start to stick. “It has to do with what child development experts call ‘serve and return,’” Darrow says. “A baby ‘serves’ a sound by making it, and you ‘return’ it by making the sound back to enable him to learn. It’s also a nice bonding experience.”

• Turn off the TV. Even educational programs can’t replace simply talking to baby when it comes to learning language. One study shows that 10-month-olds were able to understand some sounds of Mandarin Chinese when exposed to live speakers, but not when watching videos. “It makes sense that kids don’t learn from TV,” Casasola says. “Communicating is rewarding for kids because they’re connecting with you, and they can’t get that from screen time.”

• Encourage imitation. Narrate what you’re doing—and be sure to use specific words—when you’re with baby to help her learn to label her world. You might say, “Mommy is scrambling eggs with a spoon for Brianna’s breakfast. Can you say ‘egg?’” Look her in the eye and say “egg” a few times to see if she tries to mimic you. You can also use words to describe baby’s actions as well. (Think: “Brianna is putting the bottle in her mouth.”)

What to do if baby isn’t talking

Keep in mind that there’s a wide range of normal when it comes to babies developing language skills. Sometimes, although you may be concerned that baby isn’t yet talking, all the language-learning he’s been doing suddenly clicks and he’ll start talking nonstop seemingly out of nowhere.

However, if baby’s first word hasn’t been said by about 14 months, or if by age 2 he doesn’t seem to understand about 50 words or say about 10 words, speak to your doctor. “The sooner you recognize any potential problems, the sooner you can get help that could enable your child to catch up developmentally,” Casasola says. “Trust your gut as a parent if you think something might be abnormal. It’s okay to be assertive or ask for a second opinion.”

If baby isn’t reaching his speech milestones, here are some other tests you might want to ask about:

• Hearing tests. If your child has trouble hearing, there’s a good chance she’ll also have speech delays. Babies are screened for hearing impairment soon after birth but some things, such as recurring ear infections, can affect hearing and lead to language delays.

• Speech evaluation. Speech-language pathologists are specialists who help with communication issues of all kinds, from stuttering and lisps to language comprehension. The type of testing and therapy baby may need will depend on his particular challenges. For example, sometimes children can hear and understand speech but they’re just not able to articulate the sounds themselves and need some help learning how.

• Developmental screenings. These screenings are typically done at well-child visits and are a way for your doctor to tell if baby is hitting typical milestones for her age or if she might be delayed. For example, if your one-year-old isn’t making eye contact or doesn’t seem motivated to communicate, it could be a sign of a delay. “Don’t worry about stigmatization,” Casasola says. “Testing can help give kids the skills they need to overcome their challenges and adapt their learning and environment in a way that’s best suited for them.”

Experts: Marianella Casasola, PhD, associate professor in the Department of Human Development at Cornell University; Susan Darrow, a child development expert and CEO of Music Together, a music program for babies and parents that has classes in more than 40 countries.