Before you know it, baby will be on the go. Learn about the signs baby is ready to crawl, the different types of crawling and how to help baby crawl.
Save article
ByBonnie Vengrow
Contributing Writer
UpdatedJun 2017 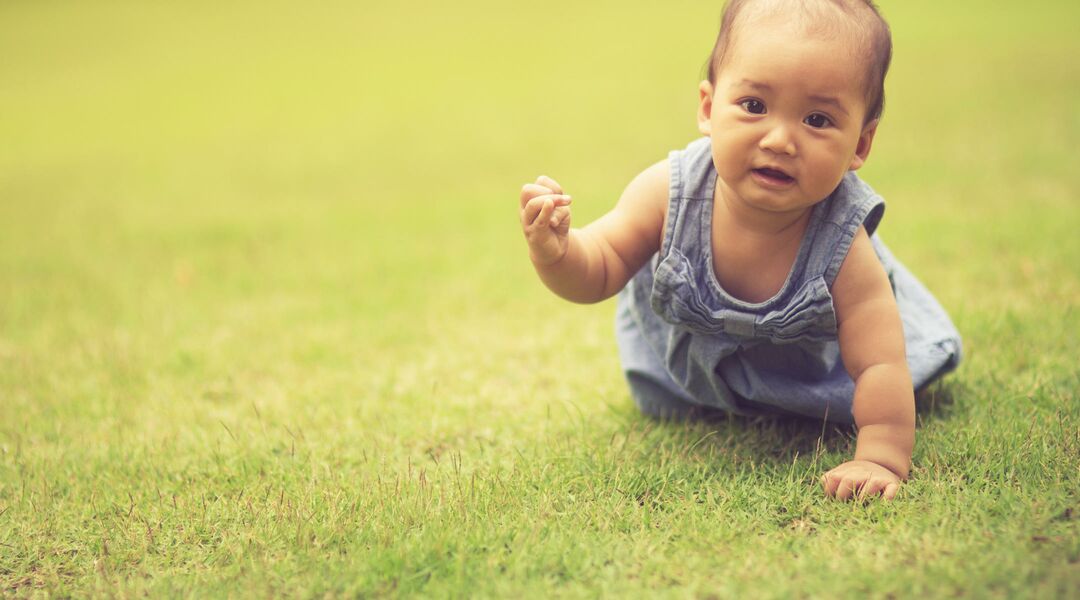 Crawling may be the cutest milestone ever, and almost from birth, parents begin wondering when do babies start crawling? A belly lurch forward, a backward scramble—crawling is baby’s first attempt at moving around independently and a natural next step after rolling over and sitting upright. But when do babies crawl? Typically, babies start crawling anywhere from 6 to 10 months old, but don’t worry if your little one seems completely content staying seated for now. Some babies skip the crawling milestone altogether and go straight to standing, cruising and walking.

In the beginning, those first attempts at baby crawling may look more like boot camp drills. Crawling baby might start out by “creeping,” or dragging his belly and legs, using just his arms—this looks a lot like baby’s tackling the barbed wire obstacle on a Tough Mudder course. Baby may also scoot his bottom along the floor, roll from point A to point B or even slide backward before moving on to traditional on-all-fours crawling. Rest assured, all of these stages of crawling are normal—not to mention adorable.

Signs Baby is Ready to Crawl

It’s hard to predict the exact age babies crawl, but there are a few signs baby is ready to crawl that will clue you in that it’s time to grab the camera. So when do babies crawl? For starters, baby will have already mastered rolling over on her own and sitting up without any help. “Look for your baby to sit upright with pretty good control and no support,” says pediatrician Ashanti Woods, MD. She may also get on all fours and just rock back and forth in place.

One baby’s preferred style of crawling may look completely different than another’s—and that’s okay. There are seemingly countless ways baby can propel herself forward and, especially in the beginning, even backward. “If there’s a way people can move, there’s probably a baby who’s done it,” says Riley Hospital for Children at Indiana University Health pediatrician Michael McKenna, MD. These are some of the most common types of crawling, according to the American Academy of Pediatrics:

How Do Babies Learn to Crawl?

Like so many baby milestones, crawling is all about control. In order to begin crawling, baby first has to master head control, then rolling over and sitting upright. As baby checks the box on each of these milestones, he’ll naturally be ready to explore the ever-widening world around him.

As baby learns to sit upright on her own, which happens around 6 to 8 months old, she will use her hands mainly for support to keep from falling. She may place her hands between her legs and lean on them for support—a position known as a “tripod sit.” But as she gains control of her torso, she’ll use her hands less for support and more for exploration, reaching for toys and other items just out of her reach.

Eventually, she’ll pull herself onto her tummy from a seated position. “Once you start seeing her resting face down on her hands with her butt raised high in the air, that’s usually a sign she’s trying to move,” Woods says. At this point, your days with an immobile baby are numbered, as she’ll soon begin propelling herself forward in one of the types of crawling outlined above.

How to Help Baby Crawl

If you’re wondering how to help baby crawl, the best thing you can do is offer lots of opportunities to practice tummy time. This mini workout will help baby strengthen his neck, back and shoulder muscles and master head control—two crawling essentials. Plus, all that time face down will help baby get used to and comfortable being on his stomach.

Along with tummy time, you can also help baby stand up by placing your hands under his arms so that he is putting all his weight on the legs and thighs. This simple exercise wakes up those little-used muscles in baby’s lower extremities. Or work on helping baby sit upright, which engages pelvic and back muscles. “To crawl, you need both the lower extremity muscles and the ab muscles,” Woods says. Try a game like peekaboo or patty-cake to keep baby interested (and sitting upright longer).

And don’t discount the value of a good incentive. Babies don’t need any special toys or gear to learn to crawl, but parents sometimes like to introduce one as they figure out how to teach baby to crawl. A play tunnel can spark baby’s curiosity and entice him to get moving—just keep in mind that you might need to crawl through it first a few times to show baby how it’s done.

McKenna also suggests placing a favorite toy just out of reach and encouraging baby to crawl or scoot toward it. Anything that’s visually stimulating makes a great learn-to-crawl toy—try activity balls that roll around and make sounds, play music or flash lights. But, McKenna adds, “anything you can use to engage your child in activities is good, whether it’s a toy or a box or an empty plastic two-liter bottle.”

Create a Safe Crawling Environment
Don’t forget to finish babyproofing (if you haven’t already) and making sure you’ve covered any and all potential danger zones before baby begins crawling. “The best way is to get on your hands and knees and see what you can find,” McKenna says. In addition to sharp corners and breakables, look for choking hazards (coins on the floor, a dropped thumbtack or pin); easily accessible chemicals (household cleaners, dishwashing pods); dangling cords or anything baby can yank on to pull things down on him or herself; and any exposed outlets. Install a baby gate at both the top and bottom of your stairs, and double-check that all heavy furniture and electronics are securely anchored to the wall or floor.

What If Baby Isn’t Crawling?

You’re likely waiting with excitement (and your camera at the ready), wondering when do babies crawl, but don’t be too alarmed if it never happens. Contrary to popular belief, the crawling milestone is actually not a major one. Some babies bypass crawling altogether and move right on to standing and walking. If baby doesn’t crawl, it’s generally not a sign that she’s about to stop hitting other major developmental milestones.

That said, there are other ways to gauge when should baby crawl: if by 7-months-old baby feels loose or floppy in your arms or refuses to bear any weight on the legs after multiple attempts to support her while standing, a call to your pediatrician may be in order. “We expect muscles to bulk up around that age,” says Woods. “When babies have a low tone or are very floppy, that could be suggestive of other things.”

Another tip to consider if you’re stressing about when do babies crawl is to keep an eye on baby’s overall progression. If a handful of months have passed with no new developments, consult your pediatrician. “Parents have a decent sense of when something is wrong with their child,” McKenna says. “There’s not a problem every time, but if you’re worried or have questions or think something doesn’t feel right, talk to your doctor.”