Baby’s first year is full of, well, firsts. Here’s your guide for what to expect when—and what to do if baby’s a little off schedule. 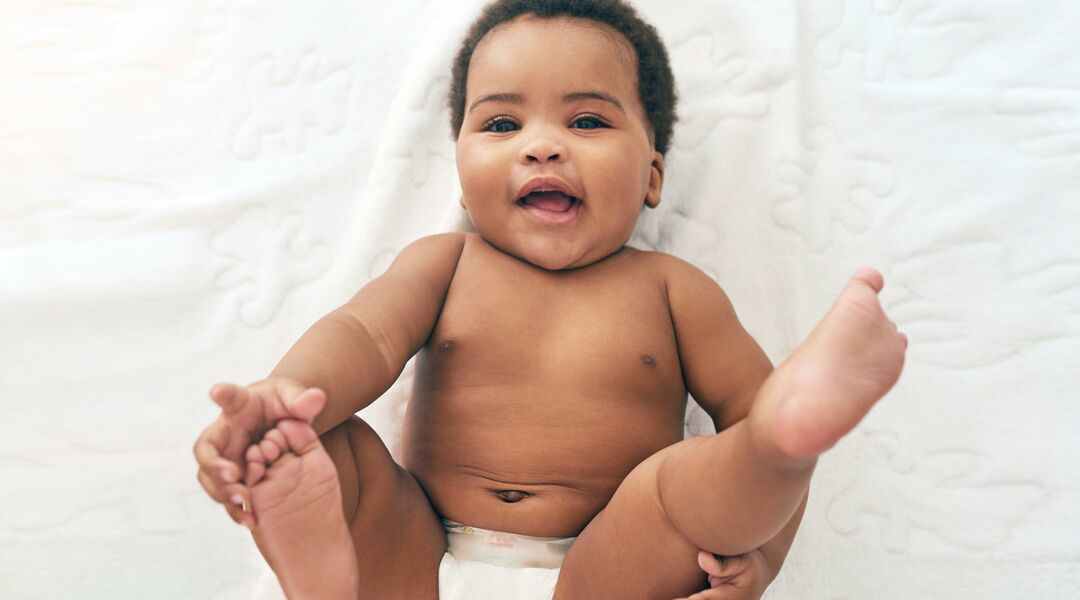 Watching baby grow and gain new skills is incredibly thrilling—and it happens fast. That first year is packed with moments when your infant masters a tricky movement and reaches exciting baby milestones. He actually smiled! She clapped her hands! He pulled himself up!

Can’t wait, right? So when will baby be able to do what? Every child hits baby milestones at his own pace—so don’t freak out if yours doesn’t follow this guide to a tee. “If it’s just one milestone that your child is a little behind on, you can mention it to your pediatrician, but chances are, everything is probably fine,” says Tanya R. Altmann, MD, author of Mommy Calls (American Academy of Pediatrics, 2008). “However, if your child isn’t hitting multiple milestones across the board—not smiling and not rolling over, for example—then I’d be a little more concerned”; let your child’s doctor know. Of course, there are instances when it may take a little longer for baby milestones to be reached—such as if baby was born prematurely. If that’s the case, your doctor can help you adjust expectations accordingly.

Baby milestones in this article:
Smiling
Rolling over
Sleeping through the night
Sitting up
Speech
Clapping hands
Reaching, grasping and holding
Waving
Crawling
Pulling up to stand
Walking

When to expect it: Baby should be smiling back at his parents around 2 months of age. You might notice baby smile in her sleep at first, but then she’ll start to smile back at you when she’s awake and alert, which makes playtime all the more fun.

How to encourage it: You’re probably already doing it: Talk to baby and throw plenty of smiles his way. “Smiling is really one of those first baby milestones I’m looking for as a pediatrician,” says Altmann. “If the baby isn’t smiling back at the parent by 2 months of age, I want to keep a close eye on him. Sometimes it will happen by 3 months, but if not, that’s when I’ll get concerned about possible neurological issues.”

When to expect it: Some infants start to roll as early as 3 months, but it’s usually more likely to occur around 4 to 6 months, Altmann says. “Initially, she’ll probably roll from front to back, and then she’ll master rolling back to front. Very often, baby will get stuck and may get upset and cry.” Even before baby has the whole rolling thing down pat, though, never leave baby alone on an elevated surface—babies start wriggling around pretty early on and can fall.

How to encourage it: Get down on the ground and talk to baby, cheering her on. Hold blocks or toys just out of reach so she can flip over trying to reach them. If baby isn’t trying to roll over by 6 months of age, let your pediatrician know. Most likely, Altmann says, baby just needs more time to hit this baby milestone. But if she’s not making any effort, that could be a sign something else is going on.

Baby Milestone: Sleeping Through the Night

When to expect it: Generally, after 4 months of age, baby should be able to sleep at least six to eight hours straight without feeding, Altmann says. And by 6 months, he should be able to go at least 8 to 10 hours without a feeding.

How to encourage it: Let baby sleep! Slowly start extending the time between nighttime feedings until you get there. And don’t rush to pick up baby the moment he cries at night. He needs to learn that if he wakes in the night, he doesn’t need you to help him fall back asleep again. If he’s not sleeping through the night by 6 to 8 months, it might just be because you’re checking on him too often at night, Altmann says, and you may want to consider backing off. But you may still want to mention it to your pediatrician—if baby keeps crying and can’t fall asleep, that can be a sign of gastroesophageal reflux (GERD).

When to expect it: Altmann estimates that about 50 percent of babies can sit—but probably pretty wobbly or propped up—at 6 months, but by 8 months, they should be able to sit comfortably and more steadily on their own.

How to encourage it: As with all baby milestones that center around motor skills, your child needs an opportunity to learn, so be sure you’re giving him plenty of free time on the floor. If you’re always wearing baby, carrying him or strapping him in a swing or chair, it may take him longer to learn to sit up, pull up to stand and walk. If baby isn’t sitting on his own by 9 months, your pediatrician may suggest he be evaluated by a physical therapist.

When to expect it: Generally speaking, babies start cooing at 2 months, laughing at 4 months and making some consonant sounds at 6 months. But every baby is different. “Between 6 months and one year of age, some babies start developing words, and some don’t,” says Dyan Hes, MD, medical director of Gramercy Pediatrics in New York City. “Some babies at 9 months might say ‘dada’ or ‘mama,’ because we say it to them. But it’s nonspecific—they’ll just say dada for everything.” (Dada is actually an easier sound to say, so mama often comes later.) By one year, babies should have at least one word that’s specific, like “hi,” “bye,” “up,” or “go.” They may even start putting two words together, like “give me.” Between 16 months and 18 months, Hes says, kids should have four to five words in their vocabulary. As for when baby’s words will actually be comprehensible? The rule of thumb is this: By 2 years, 50 percent of your child’s speech should be intelligible. That goes up to 75 percent at 3 years of age, and at 4 years old, all speech should be understandable.

How to encourage it: Talk to baby. “Whatever you’re doing, you should just say that word and point to the object. ‘Shoe.’ ‘Fork.’ ‘Spoon.’ Whatever it is, you can’t talk to your kids too much,” Hes says. “You’d be surprised how many parents don’t talk to their kids.” Reading books and listening to music in which words are sung are also great ways to help baby along. If by 2 your child still isn’t speaking, bring it to your pediatrician’s attention. “Any time there’s a speech delay, the first thing you do is get your child a hearing evaluation, because that’s the most common thing—that they’re not hearing well,” Hes says. “If the child does hear well, then we’ll likely start speech therapy.”

When to expect it: It could be as early as 6 months, when baby sits up on her own, but it’s more likely to start closer to 8 or 9 months, Altmann says—and it may take a few more months for baby to master it.

How to encourage it: Play patty-cake and other clapping games with baby. Your own clapping gets baby so excited, she’ll start to bring her hands together in an effort to clap along with you. If by the one-year pediatrician’s visit baby isn’t mimicking any of your actions—whether it’s clapping, waving or responding to you when you call to her—definitely let baby’s doctor know.

When to expect it: “At 6 months of age, babies can bring both hands to their midline. So if you were to hold a toy in front of them, they would bring both hands up and try to grab it,” Altmann says. But it’s not until about 8 or 9 months that they use a pincer grasp, using their thumb and forefinger. “This is when they can pick up small objects and bring them to their mouth—and often when parents start finger foods,” Altmann says. “You also have to be careful, because that’s when they bring other small objects up to their mouth as well.”

How to encourage it: To help those motor development baby milestones along, offer baby safe objects—colorful or noisy toys work well—to grab and jiggle. If baby isn’t picking up small pieces of food and feeding himself by 12 months—one of the food-related baby milestones for babies—let your pediatrician know.

When to expect it: Around 9 months, babies usually start waving—but some start as early as 7 or 8 months, Hes says.

How to encourage it: To help baby learn to wave, you’ll have to demonstrate how to do it. “There’s no way they’ll do it on their own,” Hes says. “Once you show them, then they get excited about it and start doing it themselves.” If baby doesn’t wave at 9 months, it’s not a huge red flag, unless it’s in conjunction with other delays. “If at 9 months a baby also isn’t picking up little pieces of food and feeding themselves, or if the baby isn’t holding her bottle, that could be a sign of low motor skills,” Hes says. Your pediatrician might recommend physical therapy to strengthen them.

When to expect it: Baby should start crawling between 6 and 9 months.

How to encourage it: Give baby plenty of tummy time and free playtime on the ground. “Get down on the ground with her and show her a bright-colored toy, move the toy a foot away from her and then coax her to move toward the object,” Altmann suggests. If baby doesn’t hit the milestone by 9 months, don’t stress—she may be right on track anyway. “Many experts don’t consider crawling one of the baby milestones, because a lot of infants won’t crawl at all,” Altmann says. She usually tells parents her definition of crawling is simply the method baby uses to get from one place to another. She could be wriggling on her tummy, rolling, scooting—it doesn’t have to be the typical hand-and-knees crawl most parents visualize.

Baby Milestone: Pulling Up to Stand

When to expect it: Though most infants will pull themselves up to a standing position between 9 and 12 months, Altmann says it’s not unusual for it to happen even earlier—like 8 months. “I warn parents at the six-month visit to drop the mattress down [in case] your infant pulls to stand in the middle of the night when you’re not aware that he can,” she says. “You don’t want him to fall out!” You’ll also want to be aware of any furniture that baby could try to pull on that could tumble, like a top-heavy chair or an entertainment center.

How to encourage it: As with sitting, make sure baby gets lots of free-range playtime. If he’s not pulling to stand by his first birthday, let your pediatrician know. “It doesn’t mean that there’s something wrong with him, because he could be almost there,” Altmann says. “But I think it’s a good idea to check in with the doctor to make sure there’s nothing else going on.”

When to expect it: After they learn to pull themselves to stand, at around 9 to 12 months babies start to cruise—teaching themselves to walk by holding on to furniture. “When they initially pull to stand, they’ll grab on, let go and drop down on their bottoms. But then they’ll figure out that they can hold on and walk along the couch,” Altmann says. “Within a couple weeks to a couple months, they’ll let go and take their first step.” She says to expect that around the one-year mark, but for some kids, it may not be until 15 months or even later.

How to encourage it: One of the most anticipate baby milestones, walking can be encouraged with more floor play! If baby doesn’t hit the milestone in the expected time frame, there’s probably nothing to be worried about, unless baby’s missing other baby milestones as well. But it’s worth a mention to your child’s doctor and maybe an evaluation by a physical therapist.