When Do Babies Start Walking?

Is baby about to become a toddler? Find out the average age babies start walking, signs baby will walk soon and how to help baby walk independently. 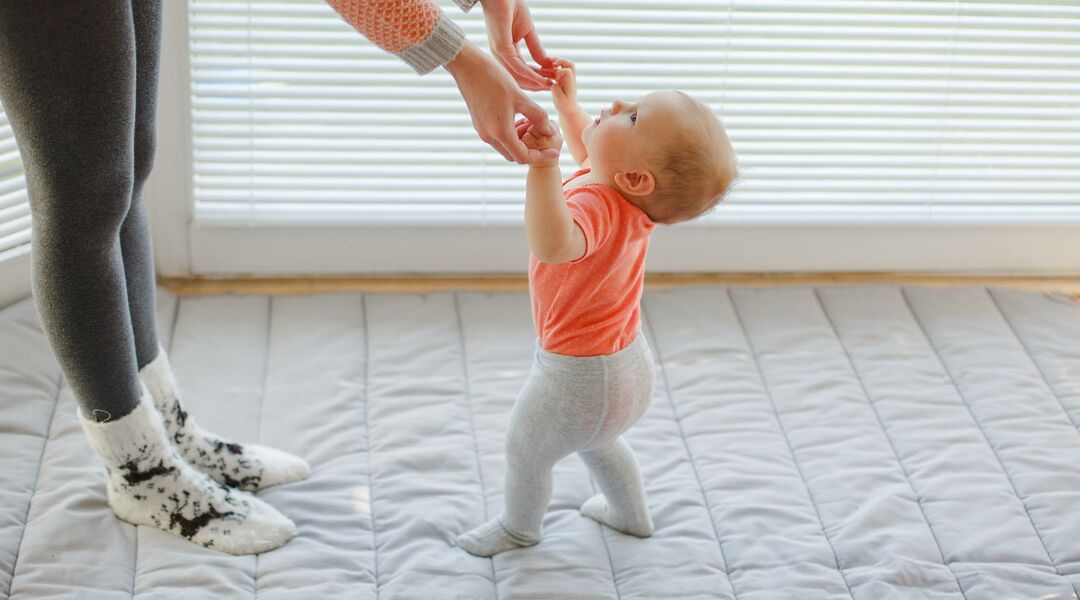 Ready to hear the pitter-patter of those little feet on the floor? It’s one of the most anticipated milestones, and like most parents you’re probably waiting eagerly, wondering, when do babies start walking? And there’s good reason to applaud when baby’s first steps finally happen. “I think we forget how complicated walking really is,” says Natasha Burgert, MD, a private-practice pediatrician in Kansas City, Missouri, who blogs at KCKidsDoc.com. “Not only do baby’s leg muscles need to gain strength to carry his or her body weight, but walking also requires strong ankles, hips and core, and an increasingly mature sense of balance. Some babies will gain that combination of skills more quickly than others, since so many parts are in play.”

So when do babies start walking? While you may have heard about some uber-precocious 6-month-old baby walking, most babies usually hit the walking milestone a bit later, between 9 and 18 months. Read on to learn the signs baby will walk soon and the strategies for how to encourage baby to walk.

Baby doesn’t hit the walking milestone overnight. In order to develop the necessary skills, babies need to progress through a series of other milestones before they can even think about taking their first steps. The road to walking begins very early on as you let baby practice tummy time, which helps strengthen and develop good head and neck control. Tummy time also sets baby up to learn how to roll over and then sit up by himself. From there, most babies start crawling (generally around 7 months), then pulling themselves up to standing (generally around 9 to 12 months), followed by cruising.

Cruising, which happens around 9 to 12 months, is baby’s way of testing the walking waters and is one of the biggest signs baby will walk soon. He’ll try a few tentative baby first steps while holding on to something for support—the couch, coffee table, pretty much whatever is in sight, so make sure any wobbly furniture is securely baby-proofed. Finally, baby will begin walking independently. It’s normal for baby to spend a few weeks mastering each new skill before moving on to the next one, but not every child follows this timeline or even the same progression. “Some children crawl for a few days and then get up and cruise, some crawl for months before they stand up, and some children never crawl,” says Carrie M. Brown, MD, a pediatrician at Arkansas Children’s Hospital in Little Rock, Arkansas.

Generally, once baby is cruising around with confidence, you’ll want to be on high alert, watching out for baby walking those first steps. Don’t forget that personality plays a role too, though. Even if baby has developed the skills to walk, it might take longer for her to get up the courage to actually do it. But if you have a bolder baby, she may start walking sooner than later.

How to Help Baby Walk

The good news is you don’t need any fancy equipment to help baby build those key skills needed to start walking. “It all starts with tummy time, and then the acquisition of one skill builds to the next,” Burgert says. “For most babies, tummy time leads to rolling to sitting to crawling and to pulling up.” Here’s a few tips on how to encourage baby to walk:

When thinking about when do babies walk, here’s a high-level view of what you can expect: Once baby’s first steps happen, it’s usually a matter of weeks, give or take, before she starts taking more confident, steady strides on her own. After that, running is, on average, just six short months away!

At this point you may be wondering, when should my baby start walking up and down stairs? As you can imagine, baby walking up and down stairs is a tougher skill to tackle, though it’s one baby will probably be eager to develop. Soon after baby starts to walk more steadily, you can let her attempt to climb the stairs by holding onto the railing and your hand. Practice here is key. Most children are able to manage stairs on their own by the time they turn 2.

Many parents start to worry if baby isn’t walking by his first birthday—and even more when the 18-month mark passes by and baby’s first steps still haven’t happened. But rest easy knowing that some babies are just late walkers. There are several causes of delayed walking, many of which aren’t serious but more related to baby’s personality. “It’s important to remember that milestones are not absolute,” Burgert says. “I’m more concerned when parents notice a regression of skills, or that a child isn’t even attempting to move forward in their progress.” So, for example, a child who isn’t attempting to crawl or pull up by 12 months is more of a concern than a child who is actively pulling up and cruising—but not yet walking—at 15 months. “Even though both of these children have a relative motor delay, the concern is the lack of forward progress in the 12-month-old,” Burgert says.

Of course, any concerns about delayed walking in babies should be reported to a pediatrician so you can find out if further testing needs to be done. But keep in mind, experts say some babies may simply be late bloomers. As long as baby is moving in a positive direction with other milestones, he’s likely just taking his time in hitting the walking milestone. Enjoy it now, because once baby takes off on his own, you’ll be wishing for the days when you weren’t running after him 24/7!

Bindi Irwin and Chandler Powell Are Expecting Their First Child