“The hard truth: Despite the fact that we literally built an entire human being, this baby is a complete stranger to us, and us to her.”

I spent much of my pregnancy imagining what my daughter would look like, whether she’d favor me or my husband or perhaps a blend of us both. I’d lie in bed for hours talking to her, mostly babbling, but also practicing the many hard conversations I would need to have with her one day—about how to love herself and others deeply and relentlessly, even when it’s hard. Especially when it’s hard. And like an invisible but marvelously tangible cord, I felt our connection grow and deepen. Already, she had a dozen nicknames, a profile on Netflix and “her spot” on the couch. It seemed only natural that our connection would intensify when she made her arrival into the world.

Except it didn’t. Not at all.

Never during the first five years of my marriage did I think I wouldn’t one day be a mother. As a nanny for more than 15 years, I spent roughly half my life helping parents raise their children. Having and raising my own seemed only natural. But when I was suddenly struck ill with an unknown chronic disease, and was bedridden for the better part of a year, it occurred to me for the first time that we might never have children. It was the darkest, hardest, most exquisitely fragile time for me.

After administering every test under the sun, the doctors were finally able to provide a name for my illness: fibromyalgia—a particularly nasty condition that affects nearly every facet of the human chassis. In the months to follow, I managed to retain some semblance of my former life, but only with the help of strong medication—medication I’d never be able to take if I wanted to have a baby. Just imagining life without the drugs was enough to send me into a weeklong insomnia spell. So that was that.

Until one day, nearly 10 years later, we found out we were pregnant.

I crashed into motherhood, hard and fast, like a burning star. I weaned off my medication in three days and wasted almost no time falling in love with my daughter. As my child grew inside of me, so did my love for her—but that had no bearing on the absolute terror I felt the moment she made her entrance into the world.

It wasn’t until my daughter, a mere 6 pounds 10 ounces, made her way out that I understood real fear. She was so small, but so loud. And in the days that followed, she only got louder and angrier. She cried and cried and cried, and then cried some more, which we were told by our pediatrician was completely normal for babies with colic. I did everything short of hula dancing in a coconut bra to try and comfort that child. But nothing worked. Again and again we were told she was healthy and would eventually grow out of it. In the meantime, however, I proceeded to lose my mind.

To put in that much energy and effort and love into someone who appeared to actually despise me was a crushing blow to what had been a very pretty picture of motherhood I had in my head. I spent weeks sobbing and raging in equal measure over the fact that she wasn’t soothed by my presence. That I was unable to take her from a place of pain and frustration into maternal nirvana—something, judging by all those blissful, Madonna-esque pictures floating around social media, I should be able to do. But I couldn’t. And for a while there, it killed me a little each day—and if I’m being completely honest, still does occasionally.

Women are notoriously hard on ourselves, aren’t we? When we become mothers—a role we’re supposedly born for—the disconnect between our smitten hearts and the gritty reality is difficult to process, isn’t it? The hard truth: Despite the fact that we literally built an entire human being, held an actual soul inside our bodies, this baby is a complete stranger to us, and us to her.

I fell in love with my daughter the second I knew she was alive. Yes. Absolutely. But the truth is, that was the easy part. It was a sweet, fluffy love, like cotton candy. This part—the part where I show up for her in all my sleep-deprived madness, drenched in spit-up and hormones, and allow her to her crack and bruise all my pretty illusions and lofty expectations of what motherhood would be like—this is love. This is the real stuff: sloppy, sharp and raw. This is what makes me a mother, not how many ridiculously cute pairs of moccasins I bought for her. (Which would be three—ahem, twelve.)

My Hazel Gwen is 3 months old now, and we are just starting to figure each other out. She knows my voice and will, if so inclined, smile as I enter her line of sight. But not always. And that’s okay. She lets me clean the boogies from her eyes without much protest, but draws the line at letting me ensnare her in restrictive, freakishly adorable outfits. I now know which toys will earn me extra big smiles and the way she prefers I cradle her body. I know she loves fans and bright lights. I can predict and recognize the look in her eyes just before she’s about to unleash a poopocalypse. I know she likes to have her forehead stroked a few times as she’s settling down to sleep, but would rather I just leave the room and let her get on with it already. 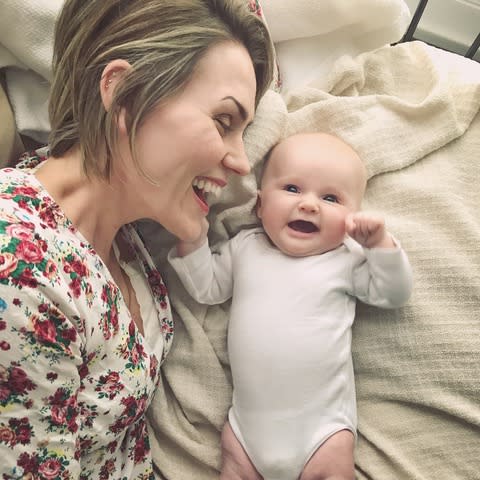 My daughter and I are not who I thought we would be. But in more ways than I can count, we are better. Because we are us. Because we are real. Because we belong to each other. The rest… the rest we’ll figure out together.

Cara Rosalie Olsen is an artist, writer and run-of-the-mill extroverted introvert. She is wife to the most patient man on the planet, and mama to her excruciatingly delicious daughter, Hazel Gwen. On any given day you’re likely to find Cara tucked away in her studio, painting something floral, drinking something caffeinated, or more often than not, knee-deep in an intense round of peekaboo. Follow her on Instagram at @molluskgrl and check out her work on Etsy and Goodreads.