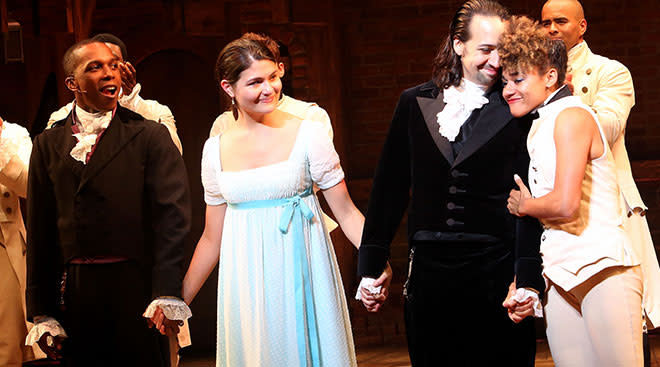 Photo: Bruce Glikas / Getty Images
We have included third party products to help you navigate and enjoy life’s biggest moments. Purchases made through links on this page may earn us a commission.

Representation is incredibly important, especially for young kids. Children start to pick up differences in race very early on, and it’s important they see themselves represented in books, movies, TV shows, other media and more. Now, one little girl’s heartwarming reaction to Hamilton actress Phillipa Soo is going viral—and showing the power and importance of representation.

Soo, who is Chinese-American, shared the video of the young girl on her Twitter account, writing in the caption, “Little Jenna here is exactly why representation matters. I am so grateful for this show, that so many young people can watch this show and say ‘It’s me.’”

The video, which was also shared by Hamilton creator Lin-Manuel Miranda, shows a little girl at home watching Hamilton, which was recently adapted as a movie for Disney Plus. As she watches Soo, Jenna says, “Look it’s me!” When her mom corrects her and says, “That’s Eliza,” the little girl responds, “It’s me.”

The sweet moment already has over 111,000 likes and 16,500 retweets—and reinforces the importance of including diversity onscreen.

While Hamilton, which first opened on Broadway in 2015, casts plenty of diverse actors—all which play a group of historical figures that were white—since its launch on the Disney Plus, it has been receiving some pushback from critics. They feel Miranda cast BIPOC actors as a display of virtue signaling, yet still wrote a play that glorified flawed men who most likely bought, sold or owned slaves.

Miranda responded to the criticism in a tweet that read, “All the criticisms are valid. The sheer tonnage of complexities & failings of these people I couldn’t get. Or wrestled with but cut. I took 6 years and fit as much as I could in a 2.5 hour musical. Did my best. It’s all fair game.”

Even with the criticisms, one thing Hamilton has taught is the importance of representation, especially for young children like Jenna.