Why I Think ‘Breast Is Best’ Should Be Banned

One mom describes what happens when breast isn’t actually best—and why the phrase is so loaded.
Save article
ByNatalie Thomas
Contributing Writer
UpdatedOct 2017 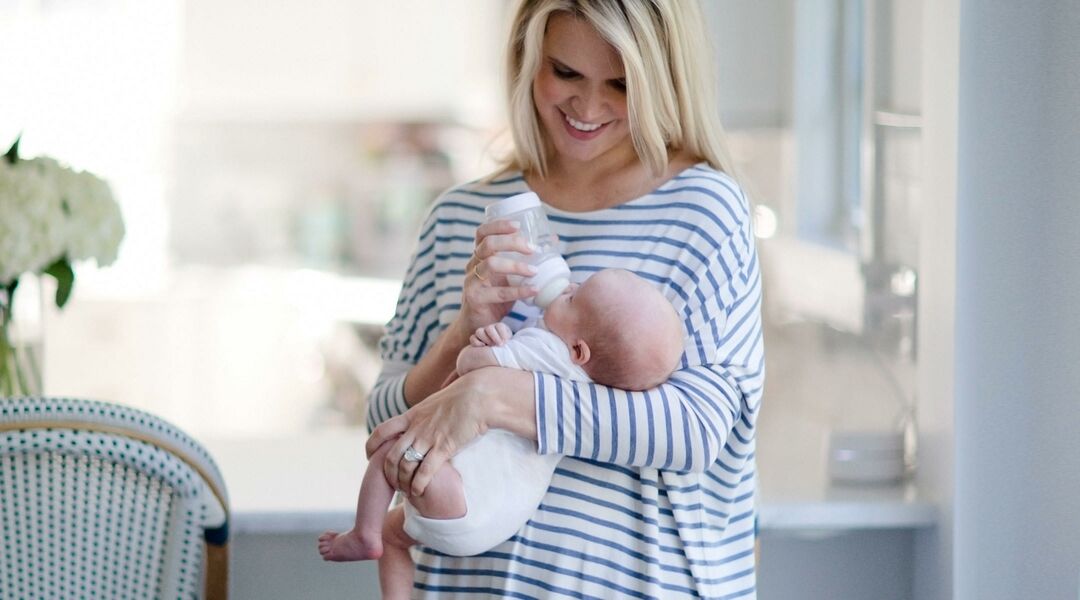 Flashback to June 2013: It was an average morning in my New York City apartment, and I was literally sobbing over spilled milk—my new normal. It was 4 a.m.; I’d been up since 2 a.m. feeding my baby and, after having swaddled her and gotten her to sleep, was now pumping to have enough breast milk to supplement the next bottle of formula. And by “enough,” I mean eeking out 0.2 ounces to add to the 3.5 ounces of formula that I reluctantly had to feed her.

I’d tried everything to increase my milk supply, all to no avail. I had strangers in the form of lactation specialists in my home, kneading my breasts, all convinced they could solve the problem and save me. I spent a small fortune on pumps, tea, beer, compresses, nipple shields and cream, my nipples were cracked and bleeding and my spirits were shattered. But that morning, I got almost 0.5 ounces from each breast—more than I’d ever come close to producing before—and I was elated. Finally, after four weeks and all my efforts, I was getting somewhere. I raced over to the kitchen to store the liquid gold in the fridge. And in my excitement and exhaustion, I knocked not one but both bottles of breast milk over and into the sink. As I tried to frantically scoop up the swirling milk, ultimately watching it flow down the drain, my heart broke. So did I. I started screaming, prompting my husband to wake and come find me curled in the fetal position on the floor. After that emotional early morning, I never came close to pumping an ounce again, and several weeks later, I ceased the charade that breastfeeding was for me.

A lot of time has since passed, and my parenting hurdles have progressed. The pain of not being able to breastfeed gave way to dealing with the terrible twos, sleep regression, potty-training troubles and threenager battles. And then there was a miscarriage that made nursing issues feel like amateur hour.

So when I finally conceived again, I promised myself and my husband that this time, I wouldn’t put us through that whole spiral of frustration and shame. I decided I’d try to breastfeed (they say every baby and postpartum experience is different)—but if I was once again faced with low milk supply, I vowed not to get upset about it and not to let the judgement of others get to me. After all, my beautiful, bright, happy 4-year-old daughter—who’s just as healthy and intelligent as any of her breastfed friends—is powerful living proof of what a formula-fed baby looks like.

And yet, despite my four years of on-the-job mom training, the countless articles I read, the hundreds of mothers I talked to and the vow I made to have confidence in my choice as the mother of my baby to decide what was best for my family, I still succumbed to shame in that hospital room. There I was, not even 12 hours after giving birth to my son, beside myself.

Having practically starved my daughter when she was born, thinking she was getting the nutrients she needed when I actually had little to no supply, I wasn’t comfortable exclusively breastfeeding my son, so I asked for a breast pump and supplemental formula ahead of time, should I need it. The request fell on deaf ears. When pressed again, the staff said they’d have to see if they could locate some, like they were talking about bottles of water during a drought. This was a hospital labor and delivery unit—surely, they had pumps and formula. When the question was raised a third time, a nurse robotically replied, “You know, breast is best.”

I lost it. Years of bad memories, pain and shame came flooding back. I was once again letting this setback—which happens to so many women—rob me of my joy. I had a perfectly healthy baby, one I fought so hard for, and here I was still letting societal expectations suffocate me. But as I started to cry, the nurse suddenly snapped out of it and corrected herself, saying, “Sorry, sweetie, fed is best.”

The phrase “breast is best” should be banned. As mothers, we come in all shapes and sizes, from different backgrounds, faiths, classes and perspectives. The thing that unites us? We’re all doing the best we can. All we want is the best for our babies, to be good mothers and raise good kids. So when you offer up the “breast is best” line to a new, sleep-deprived, emotional mother who’s doing everything in her power to feed that scared, screaming, starving baby and, despite all of her attempts, is unsuccessful at it, you’re kicking her while she’s down.

What she needs is support. Moral support. Not yet another lactation consultant (she’s likely met with several) or a hot or cold compress, not tea or lactation cookies and certainly not a slogan immediately guilting and convincing her that the way she’s able to feed her infant is somehow second rate. What she needs to hear is that it’s okay. That she’s a good mother. That there are options.

We shouldn’t need approval from others, but postpartum is an especially vulnerable time. I’m usually a “you do you” kind of person. I’ve never been one to go with the grain and typically don’t care what others think—but motherhood is my Achilles’ heel. Like every other parent out there, I just want to be successful at my job. I want to raise healthy, happy kids. And when you tell me that I’m not “choosing” the healthiest, best option when it comes to providing for my child, it’s gonna strike a nerve.

I’m not ignoring the science—I’m saying it’s often more complex than that. Sure, scientifically speaking, breast milk is best. But if, in the process of trying to provide breast milk, the mother becomes depressed, is getting no rest and is so stressed that she’s unable to bond with her baby, is breast milk still really the best? What about adoptive and foster mothers? Mothers who’ve had breast cancer? Widowed or divorced dads? Two-father families? Are those people providing subpar care because they formula-feed?

One woman likened my need to give my children formula to choosing to give them juice and chocolate every day. To her and anyone else out there that still insists on breast milk, I say: Without having considered the issue on a case-by-case basis, without having put the mental health needs of the mother (and, in turn, the baby) first and without having acknowledged there are many ways that make up a family and many options for how to nourish and provide for a child, think before you speak. Until you’ve walked a mile in my shoes or pumped from my breasts, please don’t tell me “breast is best.”

Natalie Thomas is a lifestyle blogger at Nat’s Next Adventure, an Emmy-nominated TV producer, contributor to Huffington Post, Today Show, CafeMom, heymama and Womanista, and former editor and spokesperson of Us Weekly. She’s addicted to Instagram and seltzer water, lives in New York with her tolerant husband, Zach, 4-(going on 14!)-year-old daughter Lilly and newborn son, Oliver. She’s always in search of her sanity and, more importantly, the next adventure.