“I always assumed I’d exclusively breastfeed my son on demand. But once he arrived, that “on demand” part was really hard to deal with.” 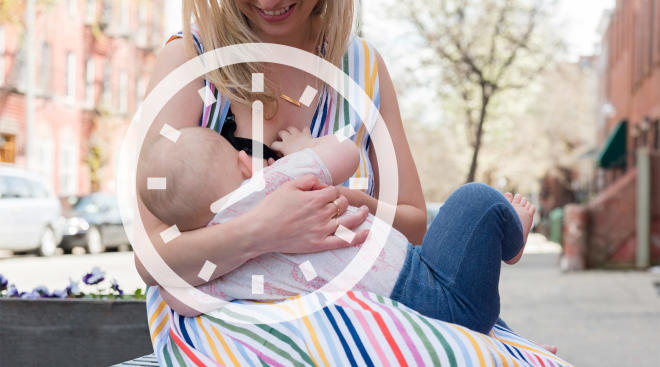 I always assumed I’d exclusively breastfeed my son Eli “on demand,” as they say—meaning whenever he wanted, around the clock. But once he arrived, that “on demand” part was really hard to deal with. So I did the exact thing you’re not supposed to do: I started nursing my newborn on a schedule.

Whether you already have a baby or you’ve got one on the way, you’re probably familiar with the American Academy of Pediatrics’ recommendation that babies be exclusively breastfed for at least the first six months of life, and on demand during the newborn phase. As many new moms learn very quickly, it’s a huge, selfless, emotionally charged commitment that you can’t fully understand until you do it.

From the second Eli was placed on my chest and my midwife asked if I’d like to try nursing him, it felt like my entire life revolved around feeding my baby. I don’t remember too much about those early days in the hospital and when we first brought him home. But I do remember that if Eli wasn’t actually attached to my boob, I was trying to interpret his cues and cries to figure out whether he needed to eat again.

The nonstop feeding was exhausting, of course. But it also made me feel anxious and completely tied down. The main thing I remember about that first month was being chained to the couch wishing I was anywhere else—all by myself. But I was too nervous to take our dog out for a walk or even sneak in a quick nap, because what if Eli needed me?

So many women describe those hazy newborn days as blissful. It certainly seemed like every new mom I knew felt that way—and they seemed to have zero problem nursing constantly. But to me, breastfeeding felt like a jail sentence. Even worse, just having those thoughts made me feel selfish and embarrassed.

Before Eli was born I had decided I wanted to nurse him for a year. After birth I knew I still wanted to try to reach that goal—but I also knew I didn’t have it in me to whip out my breast every time my son cried. Even with a newborn, I needed some semblance of predictability. I needed to feel like a person separate from my baby. And I felt like I couldn’t have either of those things if I continued to breastfeed him at every little whimper.

So a few weeks after he was born, once my milk supply seemed well established, I decided to start feeding him on a schedule—roughly every 2 to 2.5 hours—during the day. (Nights stayed on demand, though he fell into a pattern of two overnight feedings on his own pretty quickly.) Of course, if he seemed like he really needed to eat sooner, I’d feed him. But otherwise we’d wait to nurse until it was time. If it seemed like Eli just needed soothing but wasn’t actually hungry, my husband or I would cuddle or snuggle or rock him. But I didn’t feed just for comfort. (I also wouldn’t force him to nurse just because it was time, though he never refused when I offered.)

Part of me felt like a bad mom for doing this. I didn’t know any other women who nursed by the clock, so I kept quiet about it for fear of being judged. I was also acutely aware of the fact that I was going against the recommendation of a major medical organization. But I felt like breastfeeding my way was more beneficial for Eli than not breastfeeding at all. And having an idea of when I’d need to do a feeding gave me the tiny sense of freedom I needed to feel like my life wasn’t completely falling apart.

I know my approach isn’t right for everyone. And things didn’t always work out perfectly. There were a few periods of cluster feeding where Eli wanted to get back on the boob within 15 or 20 minutes of nursing, which I powered through as best I could. (My husband tried to be supportive by reminding me that they wouldn’t last forever, though at the time it really felt never-ending.) And he’d sometimes get a little cranky shortly before it was time to eat. But in general, Eli took to nursing on a schedule just fine. He’s been a pretty content baby from the start, and has always hung around the 50th percentile for both his weight and height. Just as important: A schedule gave me the boost I needed to continue to nurse without feeling like I was just a shell of my former self.

Eli dropped his middle-of-the-night feedings on his own when he was around 3 months old. And as he got a little older and fell into a more predictable routine during the day, I moved all of our nursing sessions to after he woke up from his naps. That’s the way we still do things today: At 10 months, I nurse him when he wakes up in the morning, after his morning and afternoon naps and before bed. (He also gobbles up solids for breakfast, lunch and dinner.)

I’m starting to think about how we’ll approach weaning as we near Eli’s first birthday. I’m looking forward to being finished with breastfeeding, but we’ve settled into such a comfortable routine that I don’t feel like I need to be done nursing the day he turns one. So we’ll start slow and see how it goes.

If you told me a few weeks postpartum that this is how I’d feel today, I never would have believed it. But I’m glad I found an approach that worked for my son and for me. It’s crucial for infants to get the nutrition—and comfort—that they need to grow and thrive. But I don’t believe new moms should feel pressured to feed their babies at the expense of their own wellbeing. It’s about finding the right balance, whatever that might look like for you.

Marygrace Taylor is a health and parenting writer, former KIWI magazine editor and mom to Eli. Visit her at marygracetaylor.com.