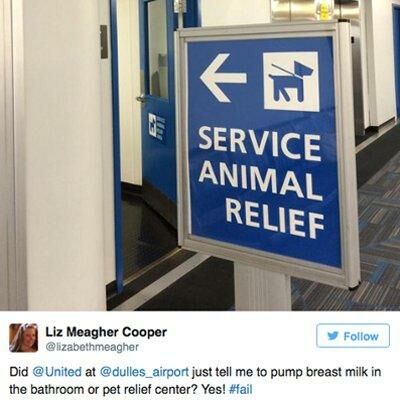 This week, a woman flying from Boston to DC was told by a United Airlines employee to pump breastmilk in the airport’s pet relief area.

“She said you can go to the bathroom. And I said the bathroom is not sanitary,” said the woman, Liz Meagher Cooper. “She said we also have a pet relief center. And I just looked at her. So, she said there haven’t been a lot of dogs in the airport today.” Meaning, you won’t be pumping in the presence of THAT much dog feces.

I think the fire hydrant is the nicest touch.

Normally, I’d try to write something funny about this, but I’m just sort of laughed-out. I mean really, world? REALLY? Not just a bathroom, but a place where there is — intentionally — cat pee? The message is to tell this woman that she and her needs are the same as those of animals, and worse, that she and her body and her baby back home are such a horrific inconvenience to the universe that she should shut up and take whatever is offered to her.

But here’s the thing: As insane as all of this is, I don’t think it means that this airline is evil. It’s one employee among a gazillion, and that’s hard to control for. I would like to state for the record that I have flown a lot with a breast pump and have had wonderful experiences with employees from United, American, Southwest, Lufthansa, Qatar Airways and more.

What I think this story, and stories like it, keep revealing to us is twofold:

Unless it’s happened to them, or to someone close to them, they have no context for it. No place for it in their brains. It doesn’t even occur to them to ask questions like “is what I’m suggesting sanitary?” because there is just no frame of reference. The employee was busy and probably annoyed at having to solve a problem that she didn’t think of as her problem, and just ushered this mother off to somewhere and assumed that would be that.

For no. 1, we just have to educate our butts off, at every opportunity. That is exactly what this badass working mom did: She got vocal. A heck of a lot more people, journalists, and airline employees (including executives — you KNOW there was a stressed-out meeting with someone pretty high up in PR about this) now have at least an inkling of what is and is not okay when it comes to pumping. Of course, it’s now on this company, and others, to actually train and educate their current and future employees. We just have to commit ourselves to never, ever, ever missing an opportunity to educate people about what this thing is and what we need in order to do it. I know it’s awkward. I know it’s exhausting to have to teach everyone about this thing. But we have to.

No. 2 is harder, and more deeply-rooted. The message in modern American culture is: You, pregnant lady, are a glowing, perfect vessel of motherhood. But as soon as you have that baby: EW! Get it, its noise (we’ve all heard the stories about parents being shamed for noisy kids in restaurants and on airplanes), its smell, and its needs, away from us. And YOU, you mother: You, too, are inconvenient. Go right back to work, possibly while you’re still bleeding, and don’t ever complain about it. Fix your smushy body, because why haven’t you gotten your postbaby body back like those celebrity ladies? You owe us a beautiful body to look at! And do not — ever — bother us with the milk that you need to get out of your body.

When and why did the world become so sterile that the amazingness of creating new life is now something to be managed and frowned upon if it dares to interrupt someone’s day?

We have to get comfortable with asserting that we and our babies deserve to occupy space. We sometimes have to do that one by one, like this awesome traveling mom, who just said no to the doggy fire hydrant. And we have to do it for each other when we see it happening. Motherhood can be lonely and isolating. When the world tries to further isolate us by treating us like inconveniences at best, and like pets at worst, we owe it to each other to assert that we — with our smushy bellies and leaking breasts and loud babies — deserve to be here.

And I’m going to keep saying it until we live in a culture that actually values us for the glorious vessels of creation that we really are.