It could help babies who are at high risk for peanut, milk or fish allergies.
Save article
ByStephanie Grassullo
Associate Editor
PublishedMar 2019 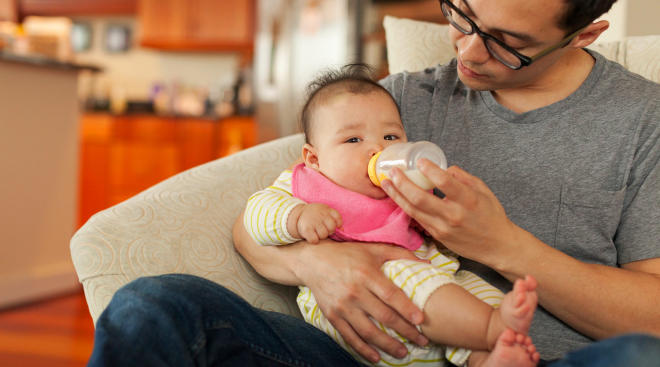 The American Academy of Pediatrics (AAP) released updated guidelines on how to prevent food allergies in kids, encouraging parents to practice early intervention of what are thought to be highly allergenic foods, such as peanuts, fish and milk.

After reviewing all the available findings on the topic, experts say there is no convincing proof that delaying the introduction of allergenic foods for kids between 4 to 6 months old works in preventing food allergies. Instead, there is a lot of evidence supporting introduction of peanuts as early as 4 months old to prevent the development of a peanut allergy in infants who are at high risk because a close relative has a history of the allergy.

There are a bunch of immune system cells in the gastrointestinal tract. When these cells are given allergic proteins in foods early on in life and in frequent intervals, they become tolerant to them. In other words, there’s a specific time frame when being introduced to certain foods may help the body tolerate them. Typically, this window is when baby is between 4 to 6 months old, the AAP says.

Additionally, avoiding allergenic foods during pregnancy or during breastfeeding didn’t work in the prevention of allergic conditions, nor did the use of special hypoallergenic formulas.

Click here for more information on food allergies in babies and everything parents should know to help keep baby safe.

Preschoolers' Diet May Affect How Well They Do in School, According to Study