What Do You Think of TIME’s Attachment Parenting Cover? 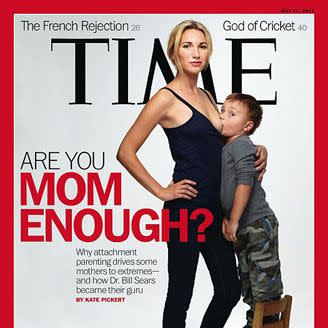 Did you check out the new cover of this week’s TIME Magazine? The cover story takes an in-depth look at attachment parenting and the controversy surrounding it. The personal history and legacy of Dr. William Sears, the father of attachment parenting and writer of well-known parenting guide, The Baby Book , is documented and explored. Attachment parenting, according to Dr. Sears, involves 7 “tools:” birth bonding (close attachment with your baby after birth), breastfeeding, babywearing (carrying your baby in a sling or baby carrier), sleeping close to baby (co-sleeping), belief in the language value of your baby’s cry (responding to baby’s crying signals), beware of baby trainers (be discerning of parenting advice) and balance (keeping a balance in parenting and your relationship with your partner.)

As for the cover itself, 26-year-old mother of two, Jamie Lynne Grumet from Los Angeles is pictured breastfeeding her almost four-year-old son. Grumet is a big proponent of attachment parenting and has two children (an adopted son and a biological son). She told TIME that she understands the critics who question extended breastfeeding and attachment parenting, but believes it’s a normal parenting style: “They are people who tell me they’re going to call social services on me or that it’s child molestation. I really don’t think I can reason with those people. But as far as someone who says they’re uncomfortable with this, I don’t think it’s wrong to admit this. But people have to realize this is biologically normal. It’s not socially normal.The more people see it, the more it’ll become normal in our culture. That’s what I’m hoping. I want people to see it.”

What do you think of TIME’s cover? Are you interested in reading about attachment parenting? Do you practice it or know anyone who does?

This Mom Donated 600 Ounces to Breast Milk After Her Newborn’s Death
Article saved.Go to My Saved Articles
Article removed.