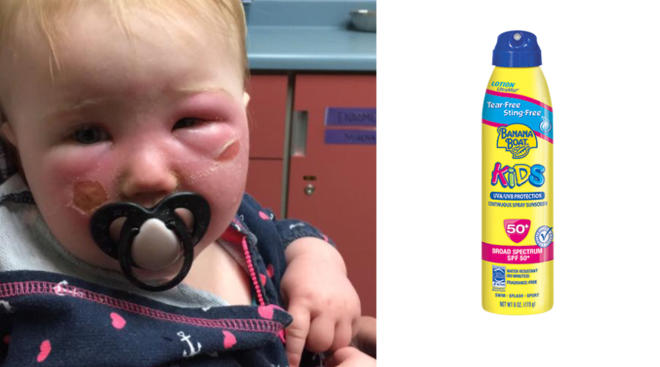 The photos of a toddler with chemical burns are hard to look at. Her eyes are nearly swollen shut and her face is red and raw. But 14-month-old Kyla is now on the mend after a nasty reaction to spray sunscreen.

Before you ask—no, this was definitely not a sunburn. In fact, Kyla’s mom, Rebecca Cannon, says she didn’t end up spending much time in the sun that day. But facial contact with Banana Boat Kids SPF50 from an aerosol scan resulted in a second degree caustic, or chemical, burn.

“Please watch and be careful when using aerosol sunscreens! I have done a lot of research since coming home and have found a disturbing amount of cases like ours,” Cannon, who lives in Newfoundland, Canada, writes in a Facebook post. She explains the bottle says the sunscreen was safe for ages 6 months and up, and she applied to to Kyla’s face after first spraying it on her hands, according to the directions. Kyla’s face became more and more red throughout the day. By the next morning, she was swollen and blistering.

Cannon tells The Bump that a topical cream prescribed by her doctor has made a world of difference for Kyla.

“It is 2 percent steroid and 2 percent antihistamine mixed in petroleum,” she says. “The past two weeks have been long and very tiring, but I just try to keep her busy and try to keep her mind off [the burns] and stick to our routine. Her cheeks now just look like she is teething.”

“We are greatly concerned when any person encounters a reaction using our products. We have spoken with the consumer and asked for the product so that our quality assurance team can look into this further. Without examining the product, it is difficult to determine what may have caused the problem as described.”

This is not the first time Banana Boat has been under fire. Their Kids Max Protect & Play Sunscreen Lotion, SPF 100, actually earned the ranking of worst sunscreen for kids by the Environmental Working Group in 2016. And the company faced a class action lawsuit alleging that the Banana Boat Kids SPF 50 actually only had an SPF of 12.69. But what about other spray sunscreens? Are they safe?

Interestingly, Banana Boat is the only brand to have made headlines for causing chemical burns. Similar incidents occurred in 2016 and 2017.

Still, health experts suggest only using any brand of spray sunscreen on children if nothing else is available. While sprays are not banned, both the FDA and Consumer Reports have expressed concerns about them, especially in regard to children. The specific concern involves nanoparticles found in the titanium dioxide and zinc oxide in some sunscreens, which have caused developmental issues in animals. Spray form makes them much more easily inhaled.

So where do you go from here? Take a look at our list of sunscreens safe for the whole family. And remember that sunscreen is actually a last resort for sun safety; finding shade and planning activities around peak sun hours should be your first course of action whenever possible.