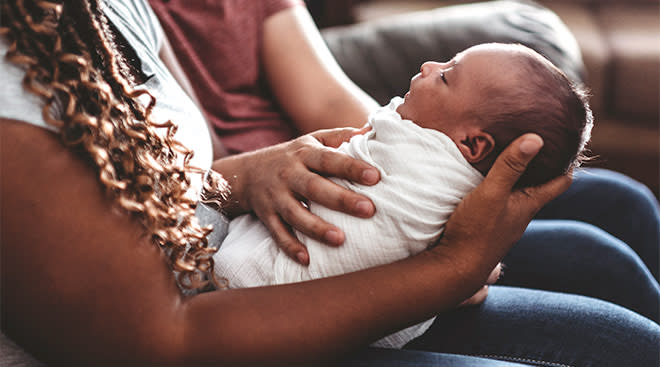 The pandemic has undoubtedly changed the quality of maternal care for expectant mothers, from partners not being allowed during certain aspects of the pregnancy to having to wear extra protective gear to appointments. Now, according to a report, the changes may have serious adverse effects on these women’s mental health.

A new flash report from Motherfigure, a maternal wellness startup, looked into the impact COVID-19 had on the pregnancy, birth and postpartum period for new moms. Overall, there has been an increase in postpartum depression and decrease in birth satisfaction and breastfeeding success.

The report surveyed 106 postpartum moms who had given birth amid the pandemic. They rated their birth experiences in comparison to “normal” times. Of the respondents, 20 percent said that their satisfaction with their birth experience was poor or very poor, as compared to 10 to 15 percent before the pandemic hit. According to the report, pre-pandemic an estimated 11 percent of births included doulas. For the first half of 2020, however, most doulas were unable to deliver in-person care and services due to visitor restrictions. The report also found that one in four moms said they wanted lactation support during the pandemic, but were unable to receive it.

More worrying, 72.6 percent of respondents self-reported anxiety and depressive symptoms during mental health screenings. Plus, 70.6 percent of mental health providers who serve the perinatal population also noted, while they aren’t seeing an increase in the amount of women with Perinatal Mood and Anxiety Disorders (PMAD), they are seeing an increase in the severity of the conditions compared to what they typically see. Before the pandemic, 15 percent of women experienced postpartum depression, and 4 to 10 percent experienced post-traumatic stress disorder after birth.

According to the American Psychological Association, postpartum depression (PPD) affects one in seven new moms, and symptoms can last up to a year postpartum. For women of color, that percentage is closer to 38 percent. Even before the pandemic, less than 25 percent of the women who screened positive for PPD received follow-up care. The report states that the increasing shift to telehealth and mental health professional shortages may also contribute to the worsening anxiety and depressive symptoms new moms are currently facing.

Unsurprisingly, the report also noted a surge of interest in home births and birth centers, with Google searches for “home birth” and related terms reaching their highest point in March, surging between 60 and 100 percent. Since then, according to the flash report, the search terms have sustained higher monthly averages, and inquiries to birth centers have more than tripled.

As the world continues to grapple with the pandemic, it’s clear that there needs to be more ways to offer support to expectant and new moms during this time. To read the full report, visit Motherfigure.com.