“This research suggests the loss of a longed-for child can leave a lasting legacy, and result in a woman still suffering post-traumatic stress nearly a year after her pregnancy loss.”
facebook
twitter
copy link
share
save
ByNehal Aggarwal
Associate Editor
PublishedJan 2020 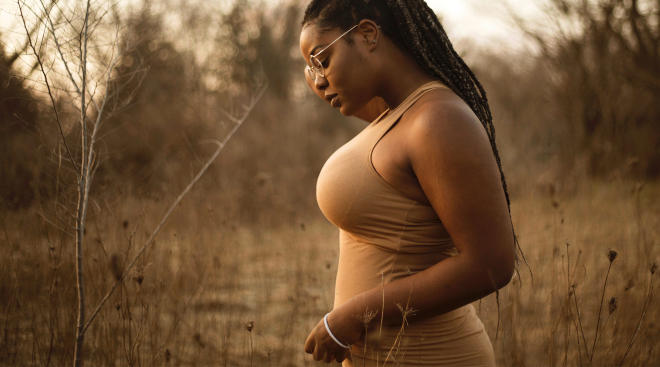 Experiencing an early pregnancy loss is devastating, and the emotions women feel can last for a long time. While more and more women are speaking out about their own experiences with early pregnancy loss, there is still a lot of work to be done around giving them the support they need. Now, a study from researchers at Imperial College London and KU Leuven in Belgium is confirming this, as it states nearly one third of women who suffer an early pregnancy loss experience post-traumatic stress.

The study recruited women from the Early Pregnancy Assessments Units at three different hospitals in London. Of the 737 women who participated in the study, all had suffered a pregnancy loss before 12 weeks, while 537 has experienced a miscarriage and 116 had had an ectopic pregnancy (this is when the embryo grows outside the womb). The women were asked to complete questionnaires on their emotions and behaviors one, three and nine months after pregnancy loss. Their responses were then compared with the responses of 171 women who had experienced healthy pregnancies.

The study found that after one month, 29 percent of women met the criteria for post-traumatic stress, 24 percent reported moderate to severe anxiety, and 11 percent reported moderate to severe depression. Those numbers fell to 18 percent, 17 percent and 6 percent, respectively, nine months after the loss. But, according to the researchers, while the numbers did decline over time, they still remained at clinically significant levels.

“Pregnancy loss affects up to one in two women, and for many women it will be the most traumatic event in their life. This research suggests the loss of a longed-for child can leave a lasting legacy, and result in a woman still suffering post-traumatic stress nearly a year after her pregnancy loss,” professor Tom Bourne, lead author of the research from Imperial College London, stated in a news release. “The treatment women receive following early pregnancy loss must change to reflect its psychological impact…Whilst general support and counselling will help many women, those with significant post-traumatic stress symptoms require specific treatment if they are going to recover fully.”

The authors caution that while the questionnaire used does screen for post-traumatic stress, a formal diagnosis would require further clinical research. They also state that women who were already experiencing symptoms may have been more likely to participate, indicating that the number of women going through psychological distress might be higher.

Jessica Farren, M.D. and first author of the research from Imperial College, also stated in the release that it’s likely many women are suffering in silence. "Post-traumatic stress can have a toxic effect on all elements of a person’s life—affecting work, home and relationships. We have made significant progress in recent years in breaking the silence around mental health issues in pregnancy and postnatally, but early pregnancy losses are still shrouded in secrecy, with very little acknowledgement of how distressing and profound an event they are. Many women don’t tell colleagues, friends or family they are pregnant before the 12-week scan, leaving them feeling unable to discuss their emotions if they suffer a pregnancy loss.”

While the results are not surprising, the study is the largest ever to look at the mental impact of early pregnancy loss—and it makes clear that there needs to be more support provided for women who experience it.

Suffering a pregnancy loss is heartbreaking, but there are resources out there that can help, including talking to a loved one. Just remember that when it comes to discussing pregnancy loss, the words you choose can make a big difference. If you or anyone you know is grieving a loss, read our tips on how to support them.