A trusted brand and a tried-and-true product are under some serious fire.
Save article
ByAnisa Arsenault
Associate Editor
PublishedApr 2018 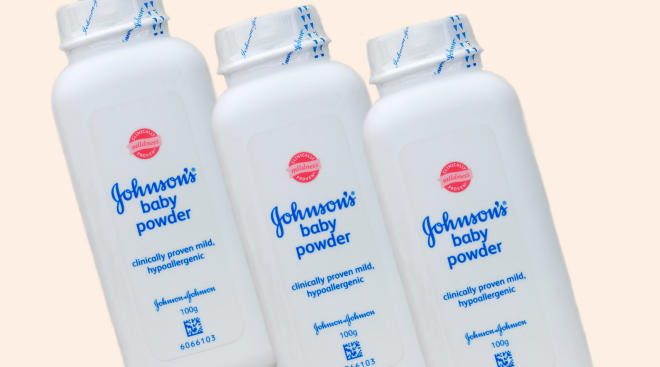 More damages could be awarded to cancer victims claiming baby powder made them sick. And this time, the sick person making headlines is a man.

While Johnson & Johnson and their supplier, Imerys Talc America, plan to appeal the verdict and say the documents are being misconstrued, plaintiff lawyers now plan to use those documents to show baby powder not only caused mesothelioma, but also the many, many reports of ovarian cancer documented over the years.

Since 2016, you’ve probably seen words like “cancer” and “lawsuit” associated with the seemingly harmless product: Johnson & Johnson’s Baby Powder. Here’s a quick recap: Alabama resident Jackie Fox—the first to make headlines—died at age 62 of ovarian cancer in October 2015, and the blame is pegged on her daily use of baby powder. Her family ultimately collected $72 million. Since then, a South Dakota cancer survivor was also awarded $55 million, California’s Deborah Giannecchini collected over $70 million and Virgina’s Lois Slemp won $110.5 million. The highest amount of damages yet—$417 million—went to Eva Echeverria, 63, who was diagnosed with ovarian cancer in 2007. She had been applying baby powder to her perineum for freshness since age 11. The women say the company concealed the possibility that one of the ingredients in its products may cause cancer.

The source of the problem is talc, a naturally-occurring substance mined from soil. The FDA says that because of proximity in the earth, talc is sometimes contaminated with another naturally-occurring substance, asbestos. The problem? Asbestos is a known carcinogen. For this reason, the FDA considers any cosmetic containing talc—often added to absorb moisture or prevent caking—unacceptable.

Studies since the 1970s have come to conflicting conclusions about the risks of talc, inconsistently finding a link to cancer. It is, however, linked to mesothelioma, which is why Stephen Lanzo’s case is such a big deal. Does cancer risk increase if it’s applied regularly to the genital area, as was the case with the women diagnosed with ovarian cancer? Does this mean you should avoid baby powder during diaper changes? Our expert, Michael McKenna, MD, a pediatrician at Riley Hospital for Children at Indiana University Health, says yes.

“Multiple studies have looked at the question of whether products that contain talc (like baby powder) are associated with cancer. The results on this haven’t been definitive, as some studies have shown no relationship, while others have shown a slight increase in ovarian cancer,” McKenna says. “In the end, I don’t see too many families even using baby powder these days. For the most part, the current generation of both disposable and cloth diapers are extremely absorbent, and the need for a drying agent in the diaper area is much lower than it even was ten years ago. Change your baby’s diaper when needed, and if you’re seeing some irritation, go with a thick barrier cream to help protect your child’s delicate skin! Skip the baby powder, as it’s typically not necessary.”

Parents opting out of powder may be bad news for Johnson & Johnson, who has been slammed with a multiple lawsuits from a Missouri jury. Although each of the women mentioned are from states outside of Missouri, their civil suits became part of a broader claim in the St. Louis, Missouri, Circuit Court, involving about 60 other people.

This isn’t the first chemical in question within Johnson & Johnson products. The Campaign for Safe Cosmetics began urging the company to remove questionable ingredients in 2009, and by 2015, Johnson & Johnson eliminated probable carcinogens 1,4 dioxane and formaldehyde from its products.