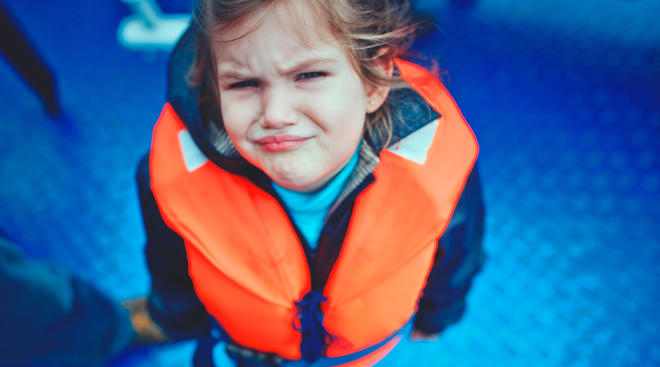 Grandfather Dan Mueller posted a PSA video on Facebook with the intention of warning other parents and grandparents about a dangerous safety product, but instead learned a lesson himself: He was putting the wrong vest on his granddaughter.

Mueller wanted to teach his 2-year-old granddaughter, Marissa, how to swim, and took safety precautions seriously. He brought her into the pool in what he thought was a safety-tested, approved life jacket, and was horrified by what he saw: Within a second or two, Marissa had flipped over with her face in the water.

He made a video intending to teach other parents about the faulty product, and thought he was covering all the bases when he included a close-up of the label with the weight requirements (along with footage of Marissa on a scale proving she meets them) and the care with which he strapped her into the vest. But when the video was posted on Facebook, he learned what had gone wrong.

Parents who watched the scary footage were quick to point out that what he thought was a life jacket wasn’t one after all. It’s a buoyancy vest, which has an entirely different purpose, and it’s very easy to confuse the two. Here are the basics:

A life jacket is intended for people who don’t know how to swim at all, or for young children. Its purpose is to keep its user afloat without needing to swim; it could even save an unconscious person until they are rescued, as it keeps them clear of the water.

A buoyancy vest is for more experienced swimmers and is not intended for very young children. It can be helpful in teaching kids to swim but is mainly intended as a swimming aid, and not drowning protection. If you were on a sailboat, for example, and were expected to swim back if you fell into the water, a life jacket would get in the way but a buoyancy vest would be helpful.

Eagle-eyed video viewers freeze-framed Mueller’s video on the vest’s label to prove it was the wrong type, and were quick to spread the word about the differences between the two water safety products. Some also pointed out that despite the weight requirements listed, Marissa was physically too small for the jacket, and others told stories of making similar mistakes and not understanding what had gone wrong.

So Mueller’s safety advice turned out to be useful after all, just not in the way he anticipated.