Women have been handling the brunt of it for centuries.
ByStephanie Grassullo
Associate Editor
PublishedMar 2019 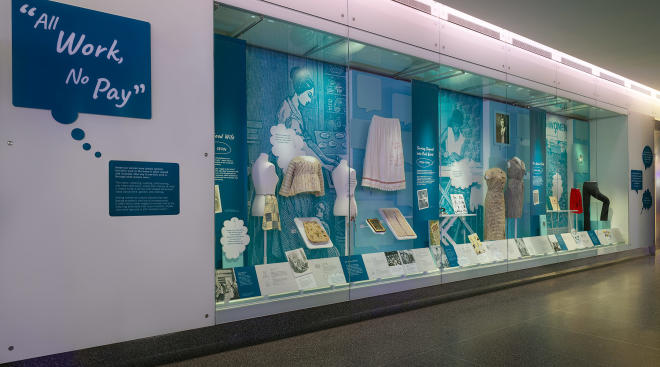 Women’s “invisible labor” is becoming a hot topic these days, and thank goodness for that. Invisible labor consists of the many tasks most women in their families are expected to do. Think, things like household chores, scheduling doctor appointments and maintaining the family’s hectic schedules.

A new exhibit at the National Museum of American History highlights this tale as old as time, tracing its roots all the way back to the 1800s. Titled “All Work, No Pay: A History of Women’s Invisible Labor,” it examines the expectation that women will take care of the housework and, despite advances in the workplace, will continue to be responsible for most of the unpaid work at home.

This outdated way of thinking takes a toll on women’s wellbeing. A new book based off of five years of research says moms in the US are drowning in stress, and not surprisingly so, dads are happier parents than moms, according to a January 2019 study.

“Usually when we say work, often people think paid work—wages, paychecks, salaries, but so much of work today and across American history has not been paid, so we wanted to highlight that this is true of much work,” the exhibit’s co-curator Kate Haulman tells Smithsonian magazine. “It is certainly true for the work of domestic spaces and the work of care and that work, historically, has been done by women.”

The exhibit explores the theme of unpaid work in three sections:

The exhibit showcases around the house “work wear” from the 1700s up until the ‘90s, to highlight how women dressed a certain way to accommodate for doing laundry, cooking, cleaning, taking care of the kids and other chores. Here, visitors will find clothing with pockets, aprons and house dresses, as well as the modern-day yoga pants. Many of the pieces on display represent clothing that isn’t typically worn out of the house, reinforcing the invisibility of women’s labor.

The display is part of the museum’s #BecauseOfHerStory, which is dedicated to researching, collecting, documenting and sharing women’s stories and how they’ve had an impact on the world. The exhibit will offer a space for visitors to sit and share stories about who did the work in their mother’s or grandmother’s houses to preserve their oral histories.

RIE Parenting: Is It for You