The popular carrier has a buckle defect that could cause baby to fall out, the CPSC states.
facebook
twitter
copy link
share
save
ByNehal Aggarwal
Associate Editor
PublishedFeb 2020 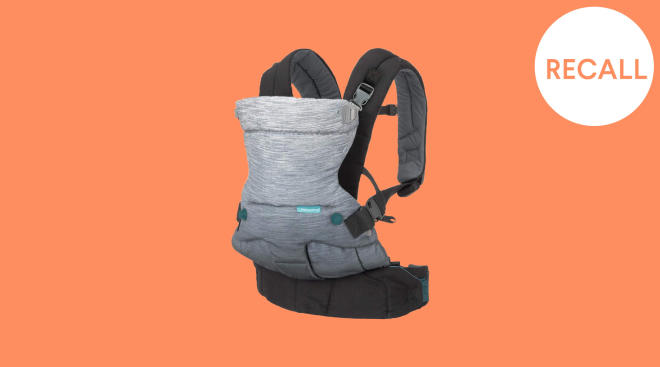 The popular baby carrier made by Infantino, sold by retail giants Target and Amazon, among others, is being recalled due to a buckle hazard that may cause baby to fall out.

The Consumer Product Safety Commission (CPSC) stated in a news release that Infantino recalled approximately 14,000 of its soft infant and toddler carriers. The product names include the Go Forward 4-in-1 Evolved Ergonomic, Flip Front2Back and Up Close Newborn baby carriers, the CPSC states.

According to the release, the carriers have faulty buckles that could break and cause baby to fall out of the carrier. While no incidents or injuries have been reported so far, the CPSC recommends that consumers immediately stop using the recalled carriers and contact Infantino for instructions on how to receive a free replacement carrier.

“This recall involves Infantino soft infant and toddler carriers. The front facing infant carriers are cotton with a front padded pouch. The carriers have a black body and black straps or a gray body and black straps,” CPSC stated in its release. “Only Infantino carriers with the following four lot codes are included in the recall. The product name and lot code are identified on label sewn into the inside of the carriers.”

According to the release the carriers were sold at Amazon and Target from November 2019 through December 2019 for between $30 and $50. You can find the lot codes involved in the recall, as well as information on how to reach Infantino about the recall, here.