This First Grader Is the Highest-Earning YouTube Star of 2018 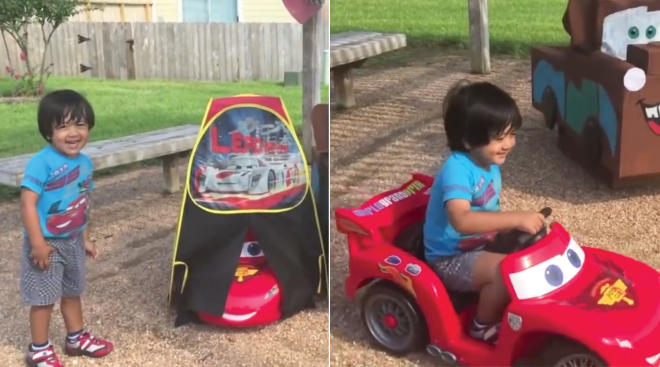 Ryan, of Ryan Toysreview is just like any youngster. He’s a ball of energy, loves playing with toys and spends most of his time on YouTube. Totally normal…Besides the one, tiny detail that the 7-year-old racked up $22 million from his YouTube channel in the past year.

Little Ryan was recently named the highest-earning YouTube star of the moment, according to Forbes’s list of highest paid YouTubers of 2018, where he beat out nine other senior contenders.

Since his channel launched in the spring of 2015, Ryan has racked up more than 17.3 million followers who can’t get enough of his short, simple and toy-centered videos. Most notably, the kidfluencer is known for his “unboxing” videos, where he, or rather his parents, films himself excitedly opening up toys and trying out all the different features included. In his most popular video to date, the young boy unboxes a giant egg to discover a plethora of toys.

In fact, it’s this video that helped pave the way for a toy line inspired by the 7-year-old and his YouTube channel. The line, Ryan’s World, features toys and clothing sold exclusively at Walmart. In addition to the Giant Mystery Egg, the toy line also includes collectibles, blind bags, slime and more. And, if we had to guess, your kid probably added a thing or two from Ryan’s collection to his holiday wish list this year.

Needless to say, Ryan hit the jackpot building up a dedicated following from a generation of kids who are turning off the TV and tuning into YouTube. But, as always, be conscious of your kid’s screen time and make sure you’re basing restrictions off of the guidelines set by the American Academy of Pediatrics.

And remember, even “kid-friendly” YouTube channels have been known to unintentionally air inappropriate content from time to time. The disturbing scenes from the explicit Peppa Pig spoofs are likely still branded in many kids’ memories.

5 Money Moves to Make When You Have a New Baby

51 Ways to Save Up for Baby