Wondering how much screen time is too much? Read The Bump’s recommended screen time for kids and how to limit screen time.
Save article
ByChristin Perry
UpdatedApr 2018 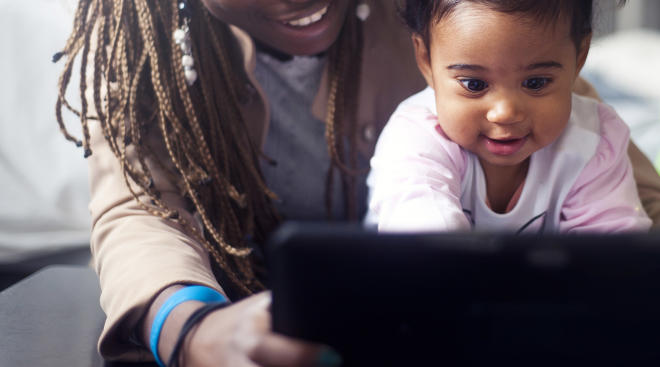 Parenting young children is not a task for the faint of heart. No other job requires as much energy, devotion, constant attention, chaos management, and selfless love as that of a parent. There are very few breaks, no days off, and even “vacation time” can get pretty hectic! So what can you do when you need a break, need to get something done, or need the kids to calm down and be quiet for more than 5 minutes? Often, it seems the easiest option is to turn on the TV, or give them a device or computer to play with. While there isn’t anything inherently wrong with allowing your kids to have some screen time every day, Dina DiMaggio MD, a pediatrician on staff at Pediatric Associates of NYC says, “Screen time has a place in a child’s life, but it needs to be used appropriately and as part of a balanced lifestyle.” With the widespread availability of high-tech gadgets, devices, screens, and even toys, it’s easy for things to spiral out of control, creating kids who can’t seem to think about anything but screen time.

What is Screen Time?

Screen time is defined as the time your child spends sitting in front of a screen or device, like a computer, TV, tablet, mobile gaming system, game console, or smartphone for non-school related activities. And screens are everywhere; a study by the Joan Ganz Cooney Center at Sesame Workshop estimates that these days there are upwards of 12 different types of screen-related media available at kids’ disposal, like those listed above, compared to only 5 in the 1980s, when the home gaming console was introduced.

How Much Screen Time is too Much?

Screens have become such a ubiquitous part of modern-day society that it is nearly impossible to prevent your kids from having access to them, whether at home or through friends and classmates. When asked how often his friends use tablets, Noah, a second grader from Virginia, said, “They use them a LOT. Basically, all the time.” In his school, even indoor recess (on bad weather days) has become default tablet time where students are allowed to play pre-screened but non-educational games. Similarly, a trip to a toy store reveals shelves and shelves of app-enabled or tablet-based toys. Even seemingly innocuous toys like coloring books and Barbies now come with either direct tablet functionality or optional related games that kids can download and play. And hand-held gaming devices have been the hottest item on Christmas lists for many years now.

With all the frenzy surrounding the latest and greatest game console, tablet, or smartphone, very few people are taking the time to stop and think about screen time effects on future generations. Never before in human history have kids had this much access to screens this young, and this consistently. Lisa Irvin, a pediatrician at Children’s Minnesota tells The Bump, “There is some evidence that excessive screen time can cause problems with the development of the frontal cortex, which is the part of the brain responsible for judgment and impulse control. As you can imagine, the combination of these factors could have long-term effects on the child’s developing brain.” She goes on to say, “The worst type of screen time is the fast-paced, intensely stimulating video games that increase the child’s adrenaline and dopamine levels.”

And kids are playing these types of games at younger and younger ages, and spending less time with traditional toys like blocks, stuffed animals, and board games. Another study published in Psychology Today indicates that “Too much screen time too soon… is the very thing impeding the development of the abilities that parents are so eager to foster through the tablets. The ability to focus, to concentrate, to lend attention, to sense other people’s attitudes and communicate with them, to build a large vocabulary—all those abilities are harmed.” (Adapted from Psychology Today’s, This is What Screen Time Really Does to Kids’ Brains)

How to Limit Screen Time

With all of this scary advice in mind, when online and on-screen activities begin to take over your child’s free time and interfere with quality family time, it may be time to limit screen time. This doesn’t mean you need to go “cold turkey” and unplug your whole family. According to Dina DiMaggio, “Children should have a set amount of time to use media and there should be media-free zones as well as media-free times instituted.” We love the idea of media-free zones as a way to limit screen time, so we’ve listed several situations where you can make simple changes by setting limits on screen time.

The problem: These days, it’s rare to see kids sitting at a table in a restaurant without a tablet or hand-held device.

The solution: You can eliminate screen time for children in restaurants by playing games as a family while waiting. Card games, taking turns telling jokes, or playing games like “5-Second Rule,” where players get 5 seconds to name 5 things in a category, can be fun and engaging ways to make the wait seem shorter.

The problem: The in-car DVD player is always on, even for the shortest of trips.

The solution: Institute a rule where the DVD player is only used for trips of more than 25 or 50 miles. Keep books and other activities in the car for trips around town, or listen to the radio or MP3 player.

At the Grocery Store

The problem: You turn to smartphones and tablets to help get through the nearly impossible task of grocery shopping with kids in tow.

The solution: We get it—this is a tough one! If they’re not whining or throwing tantrums for every single sugar-filled item in the store, they’re taking matters into their own hands (quite literally!) and throwing things into the cart left and right. To cut down on screen time for kids and curb poor behavior during grocery shopping, agree on one small treat before you enter the store, and allow your kids to use their devices during check-out if they behave while you are shopping.

By instituting these small changes when you’re out and about, you can allow your kids to have some screen time at home without them being plugged in 100% of the time, and as a bonus, you will encourage better behavior in your kids by setting screen time rules. Will it be easy? Change is rarely easy, especially when it comes to kids! If your kids are used to having a device at their disposal at every turn, making these changes will be pretty difficult at first. But remember, having high expectations of your kids will in turn give them high expectations of themselves. Show them that you believe that they can get through that long restaurant meal without a device. Tell them that you would rather talk to them about their day rather than watching TV shows in separate rooms. And if nothing else works, give your child a hug and patiently help him or her understand that you are doing this because you love them and want the best for them. After all, according to the popular saying, “To a child, love is spelled T-I-M-E,” not I-P-A-D. So, give them your best; give them your time, your attention, and your love. And save the devices for another day.