How 4 Different Parenting Styles Can Affect Your Kids

Find out what your parenting style is and what it means for your kids. Parenting has got to be one of the toughest jobs out there. So many decisions to make, so many opinions to contend with, so many options for how to handle things—how are we supposed to know what’s “right”? And then dealing with the consequences our parenting choices can have on our kids—talk about pressure. For years, researchers have been tangling with this critical (and, let’s be honest, often confusing) topic. While there are definitely nuances to every approach, psychologists generally recognize four parenting styles that influence how you raise your child—and how well adjusted your child may become.

Diana Baumrind, a developmental psychologist, first laid out these types of parenting styles in the 1960s through her research at the University of California, Berkeley. She conducted a series of studies that looked at people’s approach to parenting based on the demands they placed on their children and their responsiveness to their kids’ needs, and identified three primary parenting styles. A fourth parenting style was added later by two other researchers.

These four parenting styles—which still form the foundation for much of today’s research into childhood development—make up a broad spectrum of behavior that explains how most parents care for their kids. Of course, every parent-child relationship is unique and every day is different, but chances are, your natural mode of parenting falls somewhere among Baumrind’s parenting styles.

“In authoritarian parenting, you’re saying ‘I don’t trust you to manage things, but rather than doing things for you, I’m going to force you to do what’s right,’” says Alyson Schafer, a Toronto-based therapist and author of Honey, I Wrecked the Kids. Parents are the rulers of the roost—and it’s their way or the highway. This is an old-school type of parenting, where rules are strict and don’t leave much room for interpretation, punishments are swiftly meted out, and kids rarely have a say in making decisions or choosing things for themselves.

What authoritarian parenting looks like
If you regularly find yourself saying, “Because I said so,” you might have an authoritarian bent to your approach to raising kids. Authoritarian parents have strict rules that should be followed no matter what, decide things for the child without their input, resort to punishment to ensure obedience, and may be less affectionate or “warm and fuzzy” than parents who subscribe to other parenting styles.

Effects of authoritarian parenting
“Kids [in authoritarian households] will behave as long as the autocratic leader is in the room,” Schafer says. “But the minute you leave—especially when they’re a little older and finally get a taste of freedom—they’ll either rebel or look for someone else to show them what to do.”

Of the parenting styles, this is often considered the gold standard—the happy medium between the strict authoritarian parenting style and the permissive approach. Authoritative parents do set limits for their children, but are also responsive to their needs. Consider it a firm but nurturing style. “Parents operate like CEOs, but in a friendly way that is respectful and allows the child to learn from consequences,” Schafer says.

What authoritative parenting looks like
Authoritative parents give their children room to make decisions and learn from mistakes—but still offer the guidance and rules kids need. When children break the rules, punishments usually stem from the natural consequences of their behavior—and parents take the time to explain why the child’s behavior needed correction.

Effects of authoritative parenting
Of the different parenting styles, most studies and experts point to authoritative parenting as the best for raising well-adjusted, confident and successful kids. “Authoritative parenting is the optimal goal,” says Fran Walfish, a Beverly Hills, California–based child, parenting and relationship psychotherapist and author of The Self-Aware Parent. “Each parent must balance warmth, love and nurturing with boundaries, setting limits, following through and taking action to make sure their kids complete their responsibilities. This promotes raising confident, happy, flexible and resilient children.”

This is the most lax of the parenting styles. Permissive parents act more like their child’s friend, rather than taking a leadership role in the family. Parents are super-responsive to their kids’ wants and needs, but don’t want to make rules or do anything that’ll be unpopular with their children. “These parents don’t know how to set a limit,” Schafer says. “But it’s okay to set limits—you don’t get to have M&Ms for breakfast.”

What permissive parenting looks like
Picture Dudley Dursley from Harry Potter—a child who demands whatever he wants and knows he’ll get it, or he’ll act out until he gets his way. (Though generally, permissive parents give in to their children’s whims almost immediately.) “You don’t want the child ruling the roost—a 4-year-old shouldn’t have the upper hand in a household,” Schafer says.

Effects of permissive parenting
Permissive parenting tends to lend itself to one of two scenarios: “You end up with either a child who’s entitled or incredibly anxious because there’s nobody running the ship,” Schafer says.

Walfish paints a bleaker picture of the most lenient of parenting styles. In the worst-case scenario, without boundaries, consequences, realistic expectations, any structure or protocol for appropriate behavior, she says, kids with permissive parents tend to:

While not one of the original Baumrind parenting styles, neglectful parenting was added to the paradigm in 1983 by Eleanor Maccoby, a professor of psychology at Stanford University, and her colleague John Martin. In neglectful parenting, parents don’t respond to a child’s needs or place any demands on their child. In its most extreme form, this type of parenting often leads to the authorities getting involved, since neglectful parenting puts a child in danger.

What neglectful parenting looks like
You (hopefully) haven’t seen this one in action—of the different parenting styles, this is the kind where the child is essentially left to raise himself. Neglectful parents are detached and uninvolved in their children’s lives, and fail to meet their kids’ needs—physically, emotionally or otherwise. Parents tend to not have much conversation or interaction with their children, and are usually absent from the bulk of of their kids’ activities. With no limits and a lack of guidance, children raised through neglectful parenting can act out through inappropriate behavior.

Effects of neglectful parenting
“Neglectful parents who place no demands and don’t pay attention or respond to their children raise kids who have attachment difficulties because the bond between child and parent is so fleeting,” Walfish says. Kids raised with through this parenting style often grow up to: 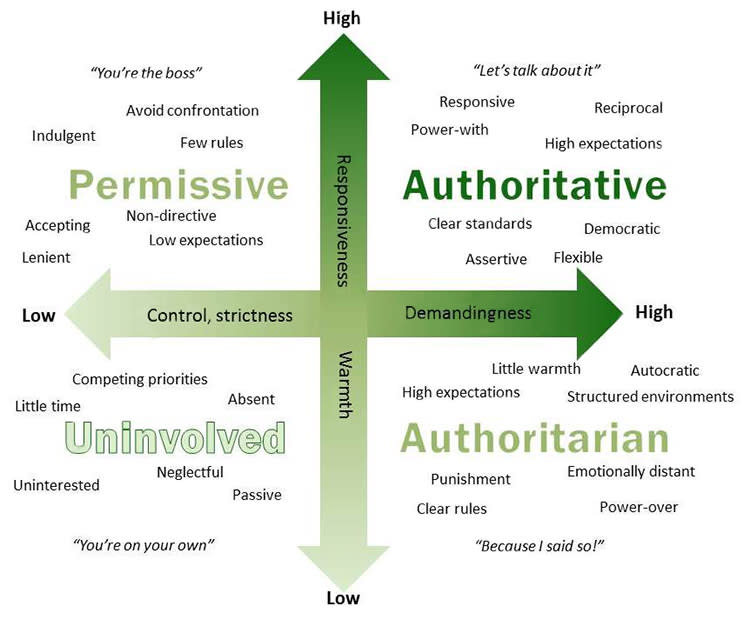 What Determines Our Styles of Parenting?

So which of the parenting styles are you? Whether it’s the the super-strict style of the authoritarian approach or the indulgent permissive philosophy, parenting styles are largely influenced by your own experiences growing up. “Most parents have never deeply thought about their motivations and their belief system, and why they parent they way they do,” Schafer says. “But we all have a history, and we have to unpack some of the stories of our childhood and compare them with common sense and science to come up with the right approach.”

You may decide to follow in your parents’ footsteps—or veer in the exact opposite direction. “We look at what motivated and what didn’t motivate us, and think about what we needed but didn’t get,” Schafer says. “Someone whose father ruled with an iron fist may swing to other extreme and doesn’t know how to set a limit.”

Your individual character is also an important factor in determining which of the parenting styles you end up using. “Our own personality type impacts everything we do,” Schafer says. “If you seek control, you’ll have a more controlling style and will be reactive to situations where you feel like you’re losing control. If you tend to look for approval or comfort, you’ll probably be more lax and lenient—even permissive.”

Many of us are doing this parenting thing with a partner by our side. And just as we don’t always see eye to eye on what to watch on Netflix or baby names, we may not always be on the same page with our parenting styles. But that’s not necessarily a bad thing. “Parents have this idea that they have to parent on the same page, but that’s not true,” Schafer says. “Every parent is different, and children need to learn that different people treat them differently.”

If you and your partner have different parenting styles, Schafer recommends keeping any conflict away from the kids. “What isn’t healthy for children is when parents argue about their parenting in front of them, or if parents undermine each other. The rule should be: Whoever starts the discipline, finishes the discipline.”

In many ways, having different approaches in the same family can be an advantage, since it gives you the opportunity to embrace the strengths of two different parenting styles. “If the kids [tend to listen well] and always stay in bed when dad does tuck-ins, let him be the tuck-in guy,” Schafer says. “If you’re more patient, you can help during homework.” That’s the surest way to set up your family for success.

Of course, different families have different ways of doing things—but these parenting styles give us some good insight into the type of approach that helps raise a healthy, happy, well-adjusted child. Because at the end of the day, that’s all we really want.