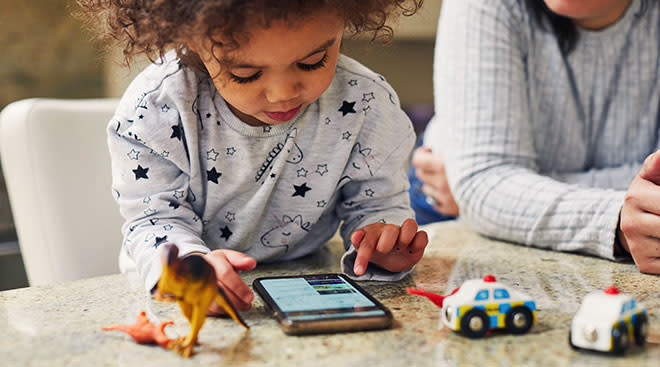 Families across the globe are adjusting to their new normals amidst the ongoing pandemic, and some aspects of life have become virtual in a way they may not have been before (think online fitness classes vs. in-person classes, online schooling vs. in-person schooling, etc). So, it’s not surprising that screen time has seen an increase in the past few weeks. But now, according to a recent survey, parents are concerned about how much time their children are spending in front of screens.

The survey also found that 30 percent of kids are spending over four hours online unsupervised, with the most prominent platforms being unrelated to education, including YouTube (78 percent), Netflix (50 percent) and TikTok (33 percent). Of the respondents, 85 percent said they were concerned about the increased time their kids are spending online.

Numerous studies in recent years have indicated that increased screen time can be harmful to children’s development. Yet, many families are relying on screens and social media to stay connected during self-isolation.

“We shouldn’t have to risk exposing our kids to sexual predators, bullies, unscrupulous advertisers, racist and sexist trolls, and platforms that deliberately addict them. This is not a problem that parents can solve on our own,” Justin Ruben, co-director of ParentsTogether stated in a news release. “We need platforms to prioritize kids’ safety and Congress to include online safety measures for our children in the next stimulus package.”

The survey found that 85 percent of parents feel Congress and Big Tech companies need to do more to protect kids online, including passing legislation that includes better protection (to stop predators, limit deceptive ads, etc.). As part of the survey, some parents listed examples of the dangers their children have faced online, including online bullying, contact attempts from strangers and in-appropriate messages from predators, among others.

While it’s harder to limit kids’ screen time these days, there are some ways to keep your child safe. The American Academy of Pediatrics (AAP) has several tips on their website to help families manage the digital landscape. These include making your own family media use plan and setting limits around how and when they use it, as well as engaging with your children while they use screens, whether it’s watching a show with them, playing games with them or helping them with online learning. The AAP also recommends creating tech-free zones, such as mealtimes and children’s bedrooms to help encourage healthier habits.

This new normal may not be ideal for you and your family, but we will get through this time together. For more tips on how to create structure around screens, check out the AAP’s website.