“I don’t think I’ve ever loved a Muppet so much,” the boy’s parent says.
Save article
ByLaurie Ulster
Contributing Writer
PublishedJul 2018 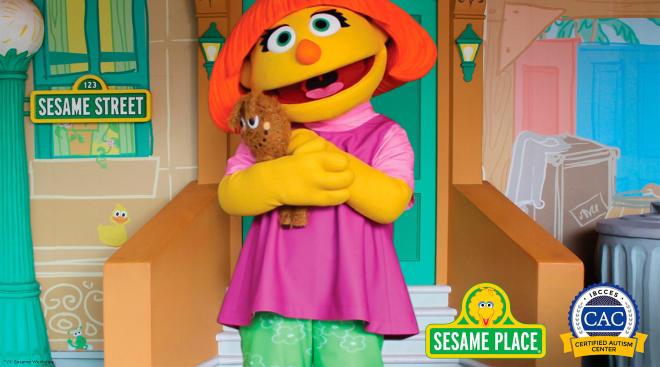 When Sesame Street introduced Julia, its first Muppet character with autism, parent Lu Everman wasn’t thrilled with the way the character was portrayed. But since then, Everman has had a change of heart. Why? Because after watching Julia on the show, a little girl was inspired to befriend Everman’s autistic son.

Four-year-old Julian was playing by the pool and spinning in circles, and Everman watched worriedly, knowing other kids often reacted negatively (sometimes even cruelly) to his behavior. Julian doesn’t respond to many social cues—he babbles and doesn’t make eye contact. But when a little girl in swim class saw him spinning, she wanted to play.

“He’s silly,” she told her grandmother. “I want to play with him.” Her grandmother, cautious, told her to be gentle, but the girl knew what she was doing. “I saw on Sesame Street,” she said as she bounded over to play with Julian.

What she had seen on Sesame Street was Julia, a Muppet with autism who doesn’t talk much and sometimes flaps her arms. Everman remembered being initially upset at the portrayal. “I was pissed at Sesame Street’s portrayal of an autistic child, because it hit so many tropes, and every autistic kid is different. (It’s not a spectrum; it’s a sundae bar.) And then I realized I was looking at it like an adult,” they wrote on Twitter. “Preschoolers look at Julia, and they see some of the most ‘readable’ traits. It helps them to not only recognize an autistic play/classmate, but to learn how to be a good friend with them. To not be afraid of them.”

“Julia and Julian were the same. When the little girl in his class saw Julia, she had seen Julian. I don’t think I’ve ever loved a Muppet so much,” Everman told TODAY after the story blew up on Twitter. (The original post has over 234,000 likes and 52,000 retweets.) “Seeing a girl basically correct her grandmother on the ins and outs of playing with an autistic child was magical.”

If there was ever proof that inclusion and representation makes a difference, this is it.

“Don’t tell me representation doesn’t matter,” wrote Everman, who is also autistic. “It’s easy … to forget exactly what that representation means for a child, as a child. Four-year-olds don’t understand representational nuance,” they said. “The best way to explain something is to meet them where they are, and that’s what Sesame Street has done with Julia.”