The idea is for dads-to-be to begin taking different hormones before baby is born so they have the ability to produce milk.
ByStephanie Grassullo
Associate Editor
PublishedNov 2018 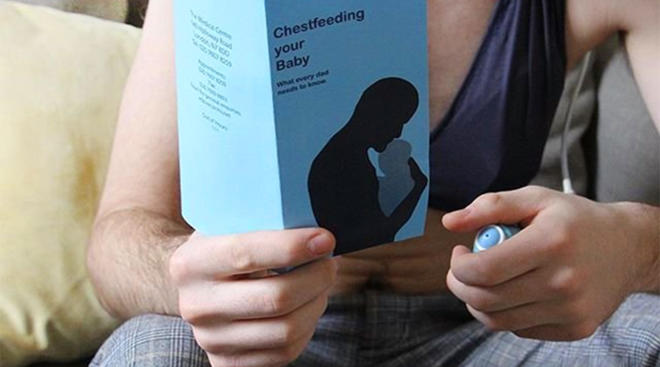 Marie-Claire Springham has the potential to drastically change the breastfeeding landscape in years to come. The London student’s “chestfeeding” invention for males just won her the grand trophy title in the inaugural Meaning Centered Design Awards.

The kit could be available in as soon as five years, and offers soon-to-be-dads a supply of the hormone progestin, a man-made form of the female sex hormone progesterone, which they’d begin taking once a day as soon as they learn their partner is expecting, Parents reports.

Once dads start to take the hormones, it would stimulate the production of milk-producing glands. About six weeks before baby arrives, dads then take a different hormone to stimulate prolactin, which triggers milk production.

The kit is still at a concept stage, but the 24-year-old hopes her design will spark a debate about the meanings behind gender in parenthood.

“The chestfeeding kit deserves particular attention because it challenges the fundamental meanings of male and female, father and mother, parent and child. At a time when we increasingly use hormones, medication and technology to change the life options available to us, Marie-Claire’s design concept goes right to heart of our taboos,” says Julie Jenson Bennett, a jury chair member for the awards.

The kit also comes with different pieces to make it easier for men to nurse, including a pump and compression vest, which is meant to be the male version of a maternity bra.

An ecstatic Iowa dad recently challenged gender roles, when he made headlines after he impromptuly became the first to “breastfeed” his newborn baby.