Take it from a couple who thought they took water safety seriously until they “unknowingly marched toward the end.”
ByStephanie Grassullo
Associate Editor
PublishedApr 2019 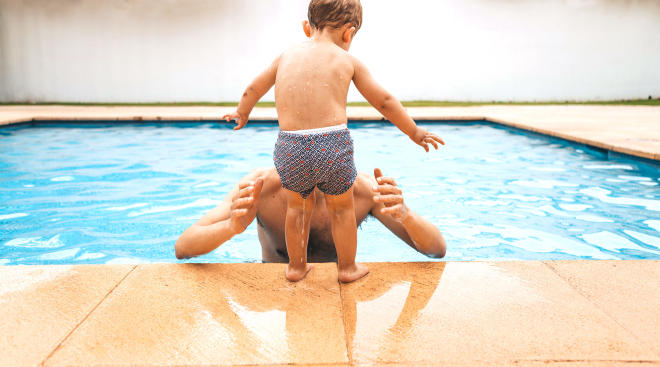 One year ago, Nicole and Jonathan Hughes were contemplating sending their 3-year-old son Levi for swim lessons. They ultimately decided he was still too immature, and opted to wait until Levi turned 4 instead. It’s a decision they’ll forever regret, because just months later, their toddler tragically drowned while swimming in a pool. In less than a year since his death, the parents have channeled their grief into a good cause, and are dedicated to raising awareness on swim safety through Levi’s Legacy.

In a recent Facebook post that has now gone viral, the pair shares their tragic story, stresses the importance of swim lessons and calls on parents to always have a “Water Guardian” who’s responsible for keeping tabs on the kids.

“Please enroll your toddler in the right swim lessons—ones that focus on water competency. ‘Survival’ is the goal,” the Facebook post warns. “If your precious 3-year-old somehow found his way to the deep end, could he survive?..I will never stop wishing to go back in time and enroll Levi.”

Drowning is the leading cause of injury death in the US for children ages 1 to 4 and the third leading cause of unintentional injury death for kids ages 5 to 19, according to the CDC. To combat this, the AAP recently issued new recommendations that call for little ones to start swimming lessons when they are as young as one year old. Additionally, youngsters should always be sporting a Coast Guard-approved life jacket at all times when in water.

Swim lessons may seem like an added expense as well as an extra errand to add to your list, but it’s worth all of your time, energy and money. The Hughes will be the first to tell you how painful time can really be when you lose a child. “You don’t want this eternity of time that stretches before me,” the post states. Money doesn’t grow on trees, so swim lessons may fall on the end of your priority list, but look for some ways to bump it up to the top. “Much of my life was spent on a budget, and I know money is a luxury,” the message reads. “Many non-profits offer scholarships, [and you can] ask for swim lessons instead of gifts. Exhaust every option, budget and beg. The cost of swim lessons is a fraction of the price of a funeral.”

But even swim lessons can’t 100 percent ensure your kids will be kept out of harm’s way. That’s where constant supervision comes into play. A large part of Levi’s Legacy centers around encouraging parents to wear Water Guardian tags when kids are and aren’t swimming. Parents are constantly preoccupied with hundreds of different things at one time, but preventing kids from drowning requires the utmost attention. With summer just around the corner and fun-filled trips planned with family and friends, it’s easy to assume one of the adults you’re with is checking on the kids. But what if everyone is under the same assumption? “Tagging” someone whose job it is to keep a watchful eye is a tangible, physical reminder of who’s on the clock.

It may seem like a silly measure to make, but take it from two parents who say they “thought” they took water safety seriously too, until they “unknowingly marched toward the end.”