Make sure to keep your little ones away from the trampoline.
facebook
twitter
copy link
email
save
ByNatalie Escobar
Updated July 11, 2017 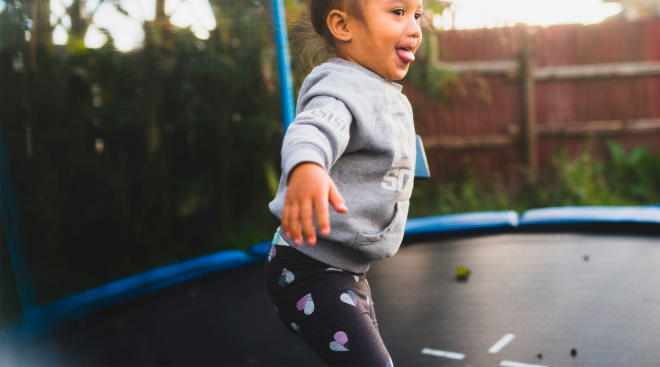 When you think of places that are dangerous for toddlers, trampolines aren’t often one of them. After all, you probably spent a portion of your childhood bouncing up and down on one. But the American Academy of Pediatrics (AAP) actually warns against children under the age of 6 jumping on trampolines because of the risk of injury.

One mom, Kait Ellen, found this out the hard way, as she wrote in a Facebook post. When she and her husband took their 3-year-old son, Colton, to a trampoline park, they weren’t expecting he would end up in a hip spica cast for six weeks. But when Colton fell on the mat he was jumping on, he broke his femur, the longest and strongest bone in his body. His parents, who were jumping on separate squares next to him, had no idea that the “repetitive pressure from jumping” was dangerous for his fragile, developing bones.
“We share this with you today to spread awareness that these facilities are specifically advertising for Toddler Time, when in fact toddlers should be no where near trampolines,” Ellen wrote.

These kinds of injuries are more common than you might think. Almost half of all trampoline injuries among children 5 years old or younger led to fractures or dislocations, many of which were even supervised by parents, according to the AAP. Furthermore, they say that rules and regulations for trampoline parks might not follow their guidelines, explaining why parents like Ellen might not know that they shouldn’t take their toddlers there. Because accidents are so common, the organization says that pediatricians should advise parents of young children against recreational trampoline use, even if there’s netting or other safety equipment.

While Ellen didn’t know that the trampoline wasn’t a safe place for her son, she says she hopes that other parents don’t have their lives “turned upside down” by accidents like this.

“We hope by sharing his story it will prevent a child and their family from experiencing the trauma and heartbreak associated with trampoline injuries in young children,” she wrote.