The flight attendant even went so far as to lie about a rule stating babies aren't allowed to cry for more than five minutes.
Save article
ByStephanie Grassullo
Associate Editor
PublishedSep 2018 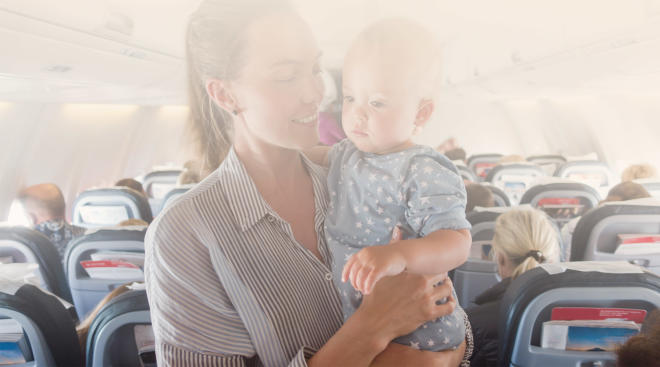 No matter how much you prepare for your first trip with baby, there will likely be a few hiccups along the way. It’s unchartered territory for parents and baby, so all you can do is pack the baby essentials and hope for the best.

Krupa Patel Bala was onboard a 13-hour flight with her husband and their 8-month-old son when their baby started crying. Frustrated and stressed by the situation at hand, things escalated when a flight attendant scolded them for not being able to control their baby.

Outraged by the way her family was treated, Bala took to social media to share their horrible experience.

“I’m currently in business class on [United Airlines] 870 from Sydney to San Francisco, and I’m beyond infuriated at the inflight experience I’m having with our head flight attendant, as she just told me it’s ‘absolutely unacceptable’ for my baby to cry on the plane,” she shares.

“Now, I don’t really know what’s wrong with my baby, but he tends to cry from time to time. I hear that’s common with newborns, but this is my only child, so I could be mistaken,” Bala quips. “After about five minutes of the baby crying in the bassinet, Linda—the flight attendant manager who is also our server and the purser—came over and yelled at my husband, [saying] it was ‘absolutely unacceptable’ for the baby to cry.”

Baffled by her remark, the pair did their best to calm their son. The mother tried to level with the worker, explaining she can’t control when her baby cries, and how it was likely going to happen again during the long flight.

“She told me we could discuss it in economy and not at my assigned seat. So, I walked back to economy with her and she dropped some knowledge on me.”

At this point, the crew member criticized the mother’s parenting, offering input neither asked for nor appreciated. In addition to a list of judgmental remarks, the flight attendant claimed there was a rule stating, ‘babies are not allowed to cry for more than five minutes.’”

The parents sympathized with passengers and understood a crying baby was likely to disrupt the flight, but wish the airline approached them in a less aggressive manner.

“She could have asked us to walk the baby around, tactfully shared that it was starting to disturb passengers or really anything with a smile that acknowledged that we weren’t out to make everyone —including us—suffer.”

“Parents of newborns have it hard enough already traveling with a baby, and we certainly don’t need crew managers piling on when we are doing our best to ensure we’re containing our children and their cries,” Bala points out.

In the end, the captain came over with the notorious flight attendant to apologize to the family. While it was appreciated, the situation left a bad taste in their mouth and the two vow never to fly with the airline again.

Flying with a baby shouldn’t be this aggravating. Before you and your little one jet set, check out a few tips for baby’s first flight so you know what to expect.