Bringing some of the magic home to families everywhere.
Save article
ByNehal Aggarwal
Associate Editor
PublishedApr 2020 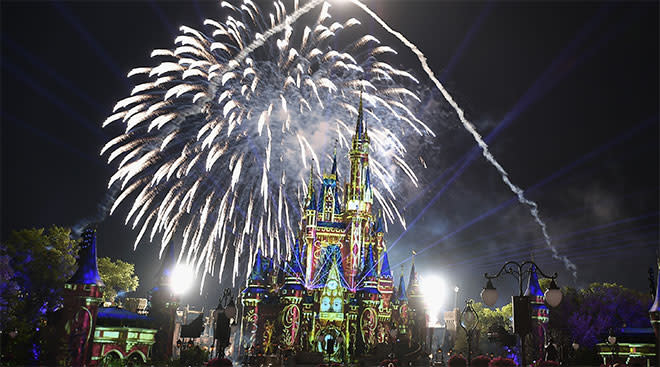 Disney is trying to bring you all the joy possible in quarantine—and that now includes a virtual fireworks show.

Last week, Walt Disney World aired “Happily Ever After,” one of the most spectacular nighttime shows put on at Magic Kingdom Park, on the Disney Park blog.

“For this special pre-recorded viewing of ‘Happily Ever After’ at Magic Kingdom Park, you have the best seat in the house,” Disney Parks stated in the blog post. “Watch as the castle you know so well becomes a canvas for the heart-tugging story of the importance of chasing your dreams, no matter what, and finding your happily ever after.”

Families are certainly enjoying Disney’s Magic Moments, as the video has already been viewed over 2 million times, and many are grateful for the escapism Disney provides. “I’ve been in NYC working in an ER here. For 3 months. The absolute hardest thing I’ve ever done in my life. And I’ve been an ER nurse for 23 years. I can’t get home to Orlando yet, but when Disney opens, I’ll be there. I’ll be first in line! And I’ll be a kid once again. This brings tears to my eyes. Life will get back to some normalcy soon. ‘Just make a wish and hold on tight. There’s magic in the air tonight. Anything can happen,’” one person commented on the video, while another wrote, “I’m not crying… I just have pixie dust in my eyes.”

The fireworks special as part of a long line of efforts Disney has pushed out to make quarantine life just a little easier for families. In recent weeks, they’ve hosted a star-studded family singalong and brought back their Bedtime Hotline.

While we may not be able to go to the Disney Parks, yet, they’ve certainly been doing their best to bring some of the magic home and keep people smiling.