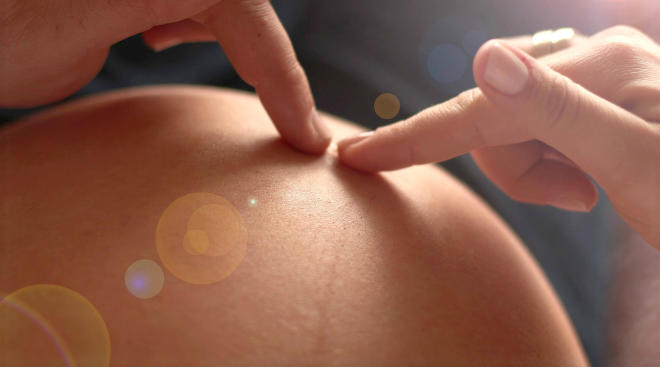 When you get pregnant, your body changes and expands to make room for your growing baby, so gaining weight is not only a given, it’s a necessity. But in our body-conscious culture, the stigma surrounding pregnancy weight is widespread and, as new research emphasizes, wildly damaging for moms-to-be.

Doctors say that women whose pre-pregnancy weight is in the “normal” range should aim to gain between 25 and 35 pounds during pregnancy. But while sticking to a healthy weight gain while expecting is important for your and baby’s health, research has determined that feeling shamed for your pregnancy and post-pregnancy size isn’t good for you either.

According to two recent articles published by Angela Incollingo Rodriguez, assistant professor of psychology at Worcester Polytechnic Institute, a whopping 65 percent of women have experienced weight stigma while pregnant and postpartum. And most often, it’s their friends and family members who are doing the damage.

In one of the articles, published in the journal Stigma and Health, Incollingo Rodriguez details her research. She surveyed 501 women, 143 of whom were in their second or third trimester and 358 who had given birth within 12 months prior to participating, and asked whether someone had made them feel bad about their weight and how frequently that had occurred.

The majority of women reported experiencing stigma from at least one source, with “society in general” being named as the top offender. Participants also reported that the media, strangers, immediate family members, friends and even healthcare providers were also responsible for making hurtful comments about their weight during and after their pregnancy. Some of the examples offered by participants—including “You shouldn’t be trying to get pregnant because you’re too heavy” and “You should put your baby up for adoption because you’re going to make it fat”—are indicative of just how damaging these remarks can be.

In fact, shaming new and expectant moms about their weight can lead to an increased risk for depressive symptoms, unhealthy eating behaviors and stress, as Incollingo Rodriguez detailed in her second article, published in the journal Social Science & Medicine.

“This is a huge problem because these symptoms can not only affect the mother or mother-to-be, but also the child,” Incollingo Rodriguez said. “Studies have shown that stress in pregnancy can lead to cognitive and learning disabilities, impaired health, even behavioral issues in the child. It can also affect the mother-child relationship, making it more difficult for mothers to breastfeed, and impair mother-infant bonding.”

So what can we do about it? Incollingo Rodriguez says efforts like sensitivity training for healthcare providers and encouraging friends and family members to be more accepting of all shapes and sizes can help reduce the stigma. Plus, continuing to applaud celebrities and other public figures who celebrate their fuller, post-pregnancy figures rather than accept the narrative that carrying around additional weight postpartum equals “letting themselves go” can also be extremely effective in moving the needle toward acceptance.

“There are already celebrity mothers out there, like model Chrissy Teigen, for example, who are celebrating their healthy bodies, even if their figures are fuller post-baby,” Incollingo Rodriguez said. “That gives a positive message. That’s the goal, ultimately—healthy mom, healthy baby, healthy relationships.”