High means it's a boy, and carrying low points to a girl—right? Not exactly. Here’s what the shape of your bump really means.
facebook
twitter
copy link
share
save
ByHolly Pevzner
Contributing Writer
UpdatedAug 2020 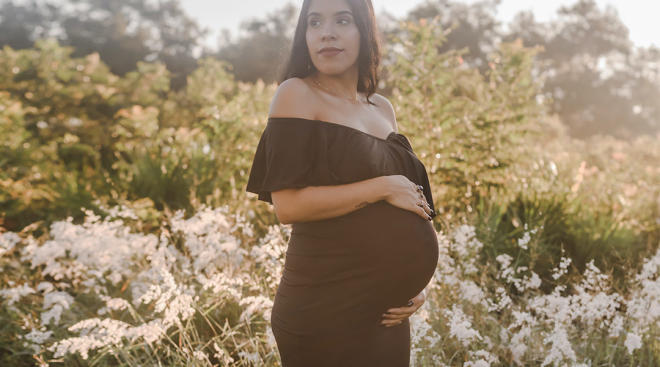 Photo: Haleigh Nicole Photography
We have included third party products to help you navigate and enjoy life’s biggest moments. Purchases made through links on this page may earn us a commission.

We’ve all heard the tummy forecasts: A high, tight bump means it’s a boy; low and wide means it’s a girl. And if you’ve got an extra-large bulge? Well then you have an extra-large baby on the way. But do any of these old wives’ tales hold true? Not really, according to experts. In fact, baby bumps can tell you far more about Mom than the baby. Read on to see what exactly your bump can—and can’t—tell you.

Your Bump Can Reveal: Your Fitness Level

“The manner in which a woman carries has everything to do with the tone of her abdominal musculature,” says Kecia Gaither, MD, MPH, director of perinatal services at Lincoln Medical and Mental Health Center in New York City. Tight abs offer more support and lift to a growing uterus, so fit moms-to-be often carry higher, particularly with a first pregnancy. “Plus, strong abs hold baby more into the body, which can cause the bump to appear smaller or less protruding,” says Katie Page, CNM, FACNM, a certified nurse-midwife in Lynchburg, Virginia. (Remember all those fit bloggers posting their six-pack bumps? Yeah.) On the flip side, women with weaker middles tend to carry lower.

It’s somehow become a well-entrenched theory: A high and pointed all-belly bump says you’re carrying a boy, whereas a wide, low, weight-goes-everywhere bump suggests a girl. So is it true? “Like any successful old wives’ tale about pregnancy, determining the baby’s gender based on how the mom is carrying probably came from a great-great-grandmother and was passed down the family tree,” says Sherry A. Ross, MD, an ob-gyn at Providence St. John’s Hospital in Santa Monica, California, and author of She-ology: The Definitive Guide to Women’s Intimate Health. Period. “There are no truths to any of these old wives’ tales I’ve come across during my 25 years practicing as an ob-gyn.”

If you’re sporting a cute little all-in-the-front basketball bump, you can likely thank your height, not baby-to-be’s gender. Tall women have more up-and-down room between the pubic bone and top of abdomen than petite moms-to-be, which allows for pregnancy weight to distribute more evenly. “Because they tend to have a larger midsection, taller women tend to stick out less and show later than shorter women,” Ross says. But if you’re on the short side, there’s a good chance you’ll carry low and around your middle. After all, there’s not a whole lot of other places for baby to grow.

Another reason for wide bumps: If baby is sprawled out horizontally (otherwise known as a transverse lie). It’s a pretty standard position before 26 weeks, but by week 35 babies should generally be head-down in the ready position for birth.

Your Bump Can Reveal: How Many Babies You’ve Had

Your body has a good memory. Once all of those I’m-pregnant-again hormones start coursing through you, your muscles and ligaments go into expander mode. And because they’ve been pre-stretched, you show sooner and lower. “With each pregnancy, your growing uterus stretches the abdominal muscles looser and looser,” Ross says. (See the whole “weaker middles lead to low bellies” thing, above.)

Your Bump Can’t Reveal: How Large Baby Is

A big bump doesn’t automatically mean a big baby. “We measure bumps and palpate the abdomen to help gauge how baby is growing relative to gestational age, but bump size has only some relationship with baby’s actual weight,” Page says. “When a doctor estimates the baby’s weight from an abdominal exam, we’re feeling the actual outline of the baby’s body within the uterus rather than the bump itself.”

Instead, a big bump is more likely a reflection of weaker abdominal muscles or a shorter stature. It can also be a sign of benign growths in your uterus. While they usually develop prior to pregnancy, many women don’t even know about these harmless muscular tumors, called fibroids, until they’ve had their first ultrasound. “Because pregnancy hormones tend to make fibroids grow, women can sometimes show larger than baby’s gestational age. And their bumps may have a somewhat lumpy appearance,” Gaither says.

Your Bump Can Reveal: If You Have Diastasis Recti

Sometimes in pregnancy, when the uterus grows upwards, mom-to-be’s “six pack” muscles stretch and split open. This scary-sounding—though surprisingly common—side effect of pregnancy is called diastasis recti. While it’s often diagnosed after childbirth, you can actually see it in your bump while pregnant. “The pregnant abdomen will sag somewhat, which to the lay person may look as if the woman is ‘carrying low,’” Gaither says. When you lie down flat on your back or get into a plank position, your belly will appear almost pointy.

“Every pregnant woman is familiar with the protruding ridge that’s easily seen going down your belly when you go from a lying to sitting position,” Ross says. “This ridge normally separates the abdominal muscles, but it can become overly stretched, causing diastasis recti. If you develop this during pregnancy, your bump leans more forward off your abdomen and will get worse with each pregnancy.”

Kecia Gaither, MD, MPH, is a New York-based physician double board-certified in ob-gyn and maternal fetal medicine with more than 20 years of experience. She serves as the director of perinatal services at Lincoln Medical and Mental Health Center in New York City.

Katie Page, CNM, FACNM, is a certified nurse-midwife with Centra, a nonprofit healthcare system based in Lynchburg, Virginia. She earned her nursing degree from Vanderbilt University School of Nursing in 2009.

Sherry A. Ross, MD, FACOG, is an ob-gyn with more than 25 years of experience and currently practices at Providence St. John’s Hospital in Santa Monica, California. She’s also the author of * She-ology: The Definitive Guide to Women’s Intimate Health. Period.

Why You May Be Losing Weight While Pregnant

Where Does All the Pregnancy Weight Go?